Festival of the Planets comes to London

From 8-13, September hundreds of astronomers from all over the world will arrive in the capital, bringing with them a huge variety of different public events to get Londoners involved in astronomy. 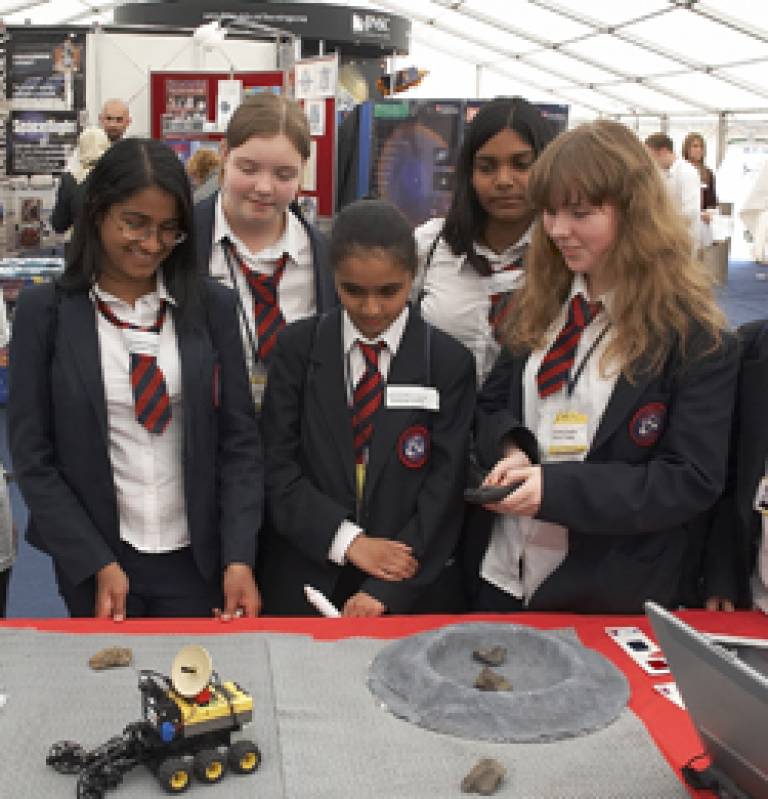 Astronomers and space explorers will be on hand to meet the public, and some of them will even be doing some space-busking!

The Festival of the Planets runs alongside the European Planetary Science Congress (EPSC), which is the largest meeting in Europe dedicated to planetary science. EPSC 2013 is hosted by UCL and it is the first time that EPSC will have been held in the UK.

The Festival of the Planets has been organised in collaboration with partners including the British Interplanetary Society, the Baker Street Irregular Astronomers, the Natural History Museum and the Royal Society.

And now several of London's foreign embassies are getting involved, sending their scientific attachés to meet delegates to EPSC 2013, or organising events at their own premises.

Join science and science-fiction experts to discover the fact and fiction behind the classic film The Day the Earth Caught Fire.

Simultaneous atomic bomb tests by the USA and the Soviet Union knock the Earth from its orbit and send it spiralling toward the Sun. The Day the Earth Caught Fire is a British science fiction disaster film starring Edward Judd, Leo McKern and Janet Munro. It was directed by Val Guest and released in 1961. Film rating: Certificate 15

The film night includes a panel discussion with:

Space Showoff is an anarchic space-themed cabaret night. Join delegates from the European Planetary Science Congress, comedians and performers for a night that'll be funny, educational and stuffed to the brim with space-y goodness.

All ticket money will be donated to the Lightyear Foundation, who take science to schoolchildren across the world who might otherwise not get a chance to take part. http://www.lightyearfoundation.org/

See models of the latest missions, try hands-on robotics activities, find out how comets are made, experience our science-buskers and get to meet some of Europe's leading space explorers.

Another way of seeing: Contemporary Art responds to planetary science

This exhibition will show work from seven contemporary artists whose work has been inspired by planetary science. The exhibition is on during September and has been scheduled to overlap with the EPSC2013 event at UCL.

This exhibition will showcase a beautiful planetary image at an unprecedented scale. Measuring approximately 3 x 40 m, the exhibition will be a very recent image of the surface of Mars, which reflects the cross-disciplinary research in planetary science conducted at the Centre for Planetary Sciences at UCL/Birkbeck. Up close, the image will challenge with an array of bizarre textures and colours; from further afield, the image will show an ethereal visage of an alien, yet also strangely familiar, world.

Public observing in Regent's Park, hosted by the British Astronomical Association and the Baker Street Irregular Astronomers. View the Moon, the planet Neptune, and deep-space objects through a variety of telescopes under the guidance of expert astronomers. Advice on astronomical equipment also available.

Date: Wednesday 11 September (or Tuesday 10 September or Thursday 12 September, if the weather forecast for Wednesday is poor), 6:30pm-10pm.

Tickets: Free. Final decision on the date will be made on Monday 10 September according to the weather forecast, and will be announced on this website.

Talk: Curiosity - one year on

On 6 August 2012, Curiosity, the newest Mars rover, landed on the red planet. Armed with an on-board laboratory of 10 instruments, including a rock drill and laser, Curiosity's mission is to uncover any evidence of ancient life. Many of the past missions to Mars have brought back tantalising discoveries about the history of our neighbouring planet but never before has a rover attempted to perform experiments live on the surface. Join us as we find out more about this incredible challenge and uncover what Curiosity has discovered so far. Speaker: Natasha Stephen

Athena Coustenis gives an overview of the Jupiter Icy Moons Explorer (JUICE) mission selected by ESA as the first large mission within the Cosmic Vision 2015-2025 plan, is being developed to address questions regarding the Jupiter system and its satellites, with a focus on the largest moon, Ganymede.

Café Scientifique: How are the giant planets protecting us?

Jupiter is more than 600 million kilometres away from us - how has it helped our planet to evolve safely? What are the space environments surrounding the giant planets like? Why are these planets important in the history of our solar system? Discover the surprising nature of the space surrounding giant planets and how this helps protect both them and planet Earth.

Origin of the moon

Despite widespread acceptance of the giant impact hypothesis for lunar origin, our understanding continues to be challenged by remarkable new geochemical data, improved simulations and theory and spacecraft exploration. This will be a timely consideration of our current understanding, how this relates to our Earth and planetary systems and an opportunity to identify the directions of future research.

This event is intended for researchers in relevant fields, but is also open to the wider public. It is free to attend. There are a limited number of places and registration is essential.

Date: 9am on Monday 23 September-5pm on Tuesday 24 September

The Italian scientific attaché, Professor Roberto Amendolia will chair the Farinella Prize lecture by Dr. Patrick Michel. The lecture is open to the public.

The Spanish Embassy and the Society of Spanish Researchers in the UK (CERU) will host a round-table discussion and reception on "Planetary Science and its communication to society".