A quarter of households in refugee camps in Algeria are currently suffering from the double burden of excess weight and under-nutrition. 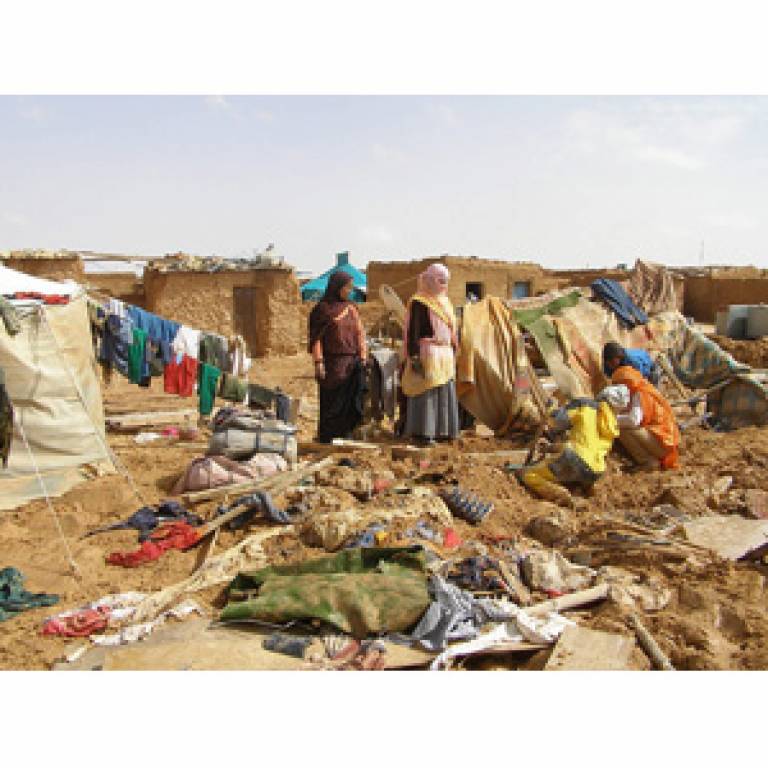 According to a study published in the journal PLOS Medicine, obesity is an emerging threat to this community, with half of women of childbearing age being overweight, whilst nutritional deficiencies such as iron-deficiency anaemia and stunted growth remain a persistent problem.

The collaborative study by the UCL Institute of Child Health (ICH), the Emergency Nutrition Network (ENN), and the United Nations High Commissioner for Refugees (UNHCR), looked at the prevalence of the 'double burden' of malnutrition - under-nutrition and obesity - among Western Sahara (Sahrawi) refugees living in a prolonged emergency situation, who rely mostly on humanitarian food assistance for survival.

Over 1,600 children and 1,700 women from 2,005 households took part in a routine UNHCR nutrition survey in 2010, which collects and monitors health and nutrition indicators of refugee children under five and women of childbearing age (15-49 years). The Sahrawi refugees are based in four camps originally set up in 1975 near Tindouf city in Algeria. Many adults have, from birth, received food assistance as their main source of food, and their children are now the second or third generation living on a diet consisting mainly of refined starchy foods.

The nutrition survey recorded the weight and height of women and children, and waist circumference of women, to determine the prevalence of global acute malnutrition (GAM, which includes thin 'wasted' children and those with nutritional oedema or swelling), stunting (a low height for age) and underweight, and overweight (a low and high weight for age, respectively) in children; and stunting, underweight and overweight (a body mass index lower than 18.5 kg/m2 and higher than 25 kg/m2, respectively), and central obesity (a waist circumference of more than 80 cm) in women.

These high levels of obesity do not imply that this population receives excessive or even adequate nutrition... (There is) a predominance of starchy foods, pulses and blended foods in food assistance packages, but with few, if any, fresh or dried vegetables and fruit. We need to find ways of boosting the supply of fresh produce to improve the adequacy and diversity of their diets.

Based on the findings, the paper makes a number of recommendations: to revise food assistance policies to take into consideration the longer term effects of meeting minimum nutritional needs in emergencies; and to promote long-term food security in protracted emergencies, for example by encouraging the refugee community to adopt small-scale gardening and food-growing schemes. Innovative approaches and resources may be needed to encourage behavioural change in these communities, given that a more sedentary lifestyle may also be contributing to the rise in obesity.

Carlos Grijalva-Eternod, lead-author, UCL Institute of Child Health, says: "Over a third of the children surveyed showed signs of malnutrition and 15 per cent of women showed signs of having experienced nutritional deficiencies during their development;  at the same time, over half the women surveyed were overweight. These high levels of obesity do not imply that this population receives excessive or even adequate nutrition, given the high prevalence of undernourished children and stunted women. Rather, the population's diet may be suboptimal for health."

"A number of reasons may account for these trends. This traditionally nomadic population itself once favoured larger women, and has an excessive sugar consumption habit. However, other factors come into play, such a predominance of starchy foods, pulses and blended foods in food assistance packages, but with few, if any, fresh or dried vegetables and fruit. We need to find ways of boosting the supply of fresh produce to improve the adequacy and diversity of their diets."

Carmel Dolan, co-author, Emergency Nutrition Network, says: "The findings from this important and unique study present a new challenge for the humanitarian sector in finding ways to continue supporting well-established food and nutrition programmes to address under-nutrition whilst developing new approaches to prevent and manage overweight and obesity in the same vulnerable population groups. Undoubtedly, there is a good deal more we need to learn about how to address the nutrition problems confronting the Sahrawi refugees and similar refugee populations, both in policy and programming terms. This study, in highlighting the problems, is a necessary and useful starting point."

Paul Spiegel, co-author, Office of United Nations High Commissioner for Refugees, says: "Obesity is not generally considered a problem in refugee settings. However, many of these people have been living in the camps since 1975. Lifestyle issues become very important, and we need to address factors that cause acute malnutrition as well as obesity among the different groups. Targeted messaging addressing lifestyle choices combined with better education is needed to improve the nutrition status of this population."

The study was partly funded by the European Community Humanitarian Office, UNHCR and the United Nations World Food Programme.

Image caption: Refugees in the Western Sahara (from Saharauiak on Flickr)