Never before displayed items from the University's collections are to go on display in the Octagon and Flaxman galleries, the historic heart of UCL, as the galleries reopen this week following a bold transformation. 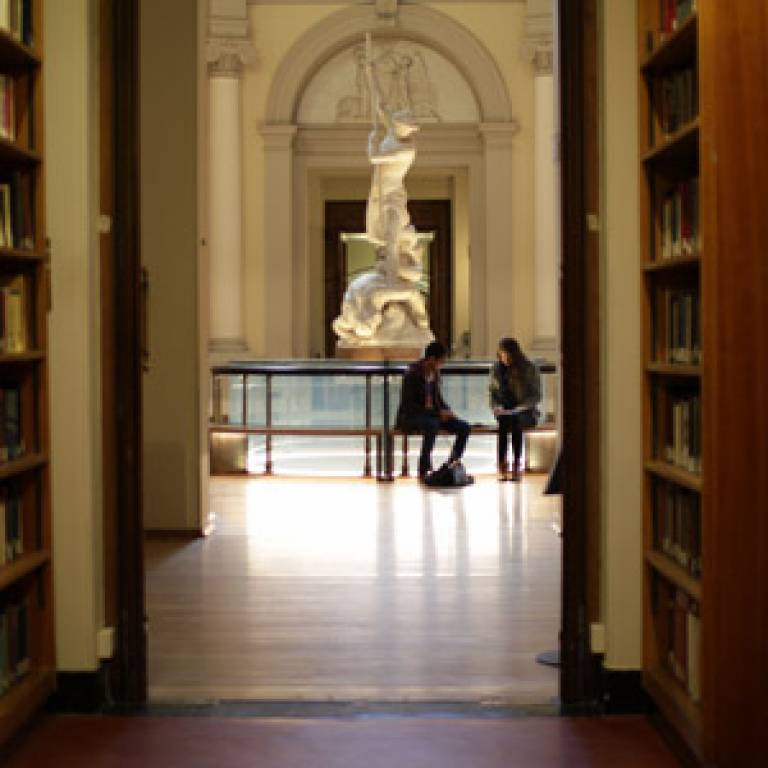 In the upper Flaxman Gallery, the interior of the Wilkins Building's famous dome, John Flaxman's plaster study St Michael Overcoming Satan (1819-24) now stands on a glass plinth above an oculus (a circular opening in the floor or ceiling). On the surrounding walls, below the dome's windows, plaster reliefs from Flaxman's studio are set into the wall. Visitors in the Octagon gallery below can look up through the oculus, seeing the reliefs from new angles.

The Octagon Gallery itself has undergone a more radical transformation; new cases, animations and interactive screens will display treasures from the University's collections, communicating complex ideas by showing historic items in new ways.

The Octagon's first exhibition, Model Translations, is of objects - some never displayed before - from the collections. The items come from art, anthropology, archaeology, engineering, pathology and zoology collections and record encounters and explorations between scholars and the natural and made environment.

The new format of the two galleries means students will be able to enjoy them in new ways, looking down from above or up from below as well as within the spaces themselves

The exhibition is designed to offer inspiration, encapsulating imagination and creativity in material form. At the same time, the items materialise world views that are problematic and difficult to reconcile today. Five of UCL's Mellon Fellows have chosen a selection of objects that speak to, and translate, different aspects of their own research. The exhibition is supported by the Andrew W Mellon Foundation of New York.

The comprehensive refurbishment of the historic spaces, overseen by Burwell Deakins Architects, took nine months. An official reopening ceremony will be held on 27 November.

Sally MacDonald, Director, Museums and Public Engagement, said the new displays would highlight the diverse resources and opportunities available at the University.

She said: "The Octagon Gallery will showcase collections that many students probably wouldn't be aware of otherwise. We hope that this bright and surprising space - that thousands of students will pass through every day on their way into the main library - will help spark new ideas about cross disciplinary working.

"In the future we will be holding competitions to choose new themes for exhibitions with research students able to submit entries. The challenging, experimental atmosphere of the galleries reflects UCL's values and atmosphere."

John Flaxman, who the Flaxman Gallery is devoted to, was essentially the Henry Moore of the late 18th and early 19th centuries. His memorial to Lord Nelson at St Paul's epitomises the extent of his acclaim. He was one of the great sculptors of the period who, unusually for a British artist, had a wide reputation across Europe.

Following his death in 1826, the contents of Flaxman's studio were donated to UCL by his sister-in-law Maria Denman in 1847.

Today, the Flaxman Gallery - a rare surviving nineteenth century sculptural installation - is considered by art historians as comparable to plaster cast galleries by Italian contemporaries such as Canova. It has been featured on television and film, most notably in Christopher Nolan's 2010 thriller Inception.

The plaster reliefs within the Flaxman Gallery are only one part of UCL's collection of Flaxman's art. UCL Art Museum contains further drawings, prints and models from the Flaxman Collection, along with prints and drawings by old master artists such as Dürer, Rembrandt and Turner.

Sally MacDonald said: "The new format of the two galleries means students will be able to enjoy them in new ways, looking down from above or up from below as well as within the spaces themselves."

William Deakins, Director at Burwell Deakins Architects, said: "It's extremely satisfying to see such prominent areas of the university being brought back to life, reaffirming the galleries as the cultural heart of the university. By visually linking the two galleries, it has animated both spaces whilst also helping visitors orientate themselves in the building.