An experiment to look for one of nature's most elusive subatomic particles is finally under water, in a stainless steel tank nearly a mile underground beneath the Black Hills of South Dakota. 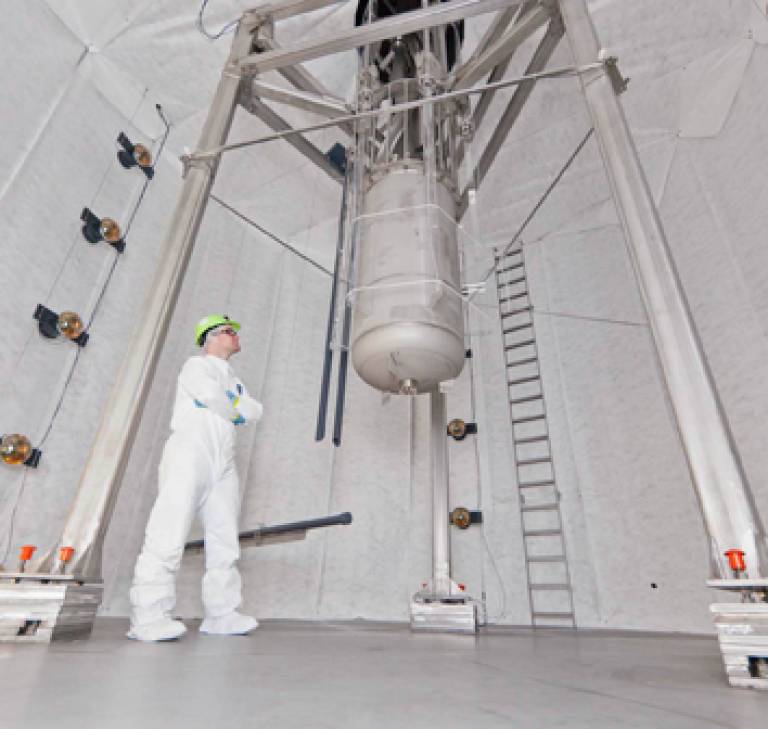 The Large Underground Xenon experiment, nicknamed LUX, will be the most sensitive device yet to look for dark matter. Thought to comprise more than 80 percent of the mass of the universe, dark matter has so far eluded direct detection. The LUX detector, under construction for more than three years in South Dakota, was installed underground in a protective tank in July. The tank was filled with water last week, and all systems are functioning well.

Dr Chamkaur Ghag (UCL Physics & Astronomy), a recent appointment in the High Energy Physics Group, leads the UCL activity in the experiment which is now installed deep underground in a former gold mine. He said: "The LUX detector will be the most advanced instrument yet in the worldwide hunt for the missing mass of the Universe, known as 'dark matter'. With a sensitivity reach greater than any previous instrument, LUX will begin operation in 2013 and may well become the first to shed light on dark matter!"

Mike Headley, laboratory director for the Sanford Underground Research Facility (Sanford Lab) in Lead, South Dakota, said: "This is a major step forward on the road to an operational detector in early 2013." The Sanford Lab is owned and operated by the South Dakota Science and Technology Authority, with support from the Department of Energy and oversight by DOE's Lawrence Berkeley National Laboratory.

The LUX detector will be the most advanced instrument yet in the worldwide hunt for the missing mass of the Universe, known as 'dark matter'. With a sensitivity reach greater than any previous instrument, LUX will begin operation in 2013 and may well become the first to shed light on dark matter!

LUX requires a very quiet environment. In July, the experiment was installed 4,850 feet underground in the Sanford Lab, where it is protected from the cosmic radiation that constantly bombards the surface of the earth. LUX also must be protected from the small amounts of natural radiation from the surrounding rock. That's why the detector, which is about the size of a telephone booth, was lowered into a very large stainless steel tank-20 feet tall by 25 feet in diameter. The tank has now been filled with more than 70,000 gallons of ultra-pure de-ionized water that will shield the detector from gamma radiation and stray neutrons.

The water tank also is lined with 20 devices called "photomultiplier tubes," or PMTs, each capable of detecting a single photon of light. Very occasionally, a high-energy particle caused by cosmic radiation will penetrate the earth all the way down to the LUX experiment. If that happens, the resulting tiny flash of light in the water will alert researchers that a corresponding signal in the detector was not caused by dark matter.

Now that LUX is under water, researchers are testing the experiment's complex electronics-a process that will take weeks. The detector itself is a double-walled titanium cylinder about 6½ feet tall by 3 feet in diameter. The cylinder is a vacuum thermos-or "cryostat"-that holds about a third of a ton of xenon, cooled to a liquid state at minus 160 degrees F.

Inside the cryostat, 122 smaller PMTs will detect when a WIMP bumps into a xenon atom. The collision will produce two flashes of light-one at the point of impact and a second flash in a thin layer of xenon gas at the top of the detector. The second, stronger flash will be caused by electrons released during the collision and drawn upwards by a strong electrical field inside the detector. Researchers will compare data from the two flashes to determine whether dark matter has been discovered.

Image:University of California, Davis, physicist Jeremy Mock inspects the LUX detector. The cylinder in the center resides inside a protective water tank, which now has been filled with ultra-pure water. Credit: Matt Kapust/Sanford Lab