World experts gather at first international cilia scientific conference in London, 16-18 May Researchers from the UCL Institute of Child Health are this week joining their peers, patient support groups and doctors in highlighting the need for more awareness of ciliopathies, a relatively new classification of genetic diseases of which little is known. 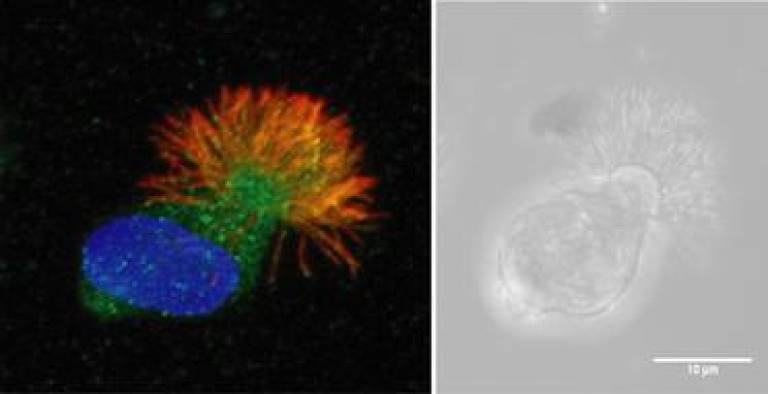 Ciliopathies are caused by defects in the function or structure of cilia, small antenna-like protuberances found on the surface of virtually every cell in the human body. Over 20 ciliopathies have been identified and more are suspected, with an estimated one in 1,000 live births affected.

Each ciliopathy condition within the cluster is incredibly difficult to diagnose as a standalone disease because symptoms overlap. However, through raising awareness of the cluster there is a hope that health professionals will be able to recognise several warning symptoms such as blindness, deafness and obesity which together could indicate it is a ciliopathy condition, and refer the child to a specialist.

This is in line with the Department of Health's UK plan on rare diseases, which has been published for consultation. It acknowledges that all doctors should have the right training to be aware of the possibility of a rare disease. Rare diseases are those that affect fewer than 5 in 10,000 of the population.

Philip Beales, Professor of Medical and Molecular Genetics, UCL Institute of Child Health, comments, "Ciliopathies present an enormous area of research as we predict there are over one hundred waiting to be defined in this ever expanding group.

"The UK already has a strong record of supporting and treating people with rare diseases. Our hope therefore is that more and more attention will be given to ciliopathies, which in turn will help to raise awareness amongst health professionals and lead to earlier diagnosis."

Professor Beales and his team work in the newly launched Birth Defect Research Centre, a state-of-the-art facility across the joint institutions of Great Ormond Street Hospital and UCL Institute of Child Health (ICH).

Kay Parkinson, Chief Executive Officer, Alstrom Syndrome UK comments, "Both my children had Alstrom Syndrome, but it took until they were 15 and 18 to get a diagnosis. This was in in 1998 and even with a diagnosis there was no information available on the disease.

"Today there is greater awareness of the medical problems that Alström Syndrome can cause and genetic testing for the gene can aid earlier diagnosis. However, because of its rarity, many GPs, doctors working in hospitals and many other health professionals will not have come across Alström before - or perhaps have even heard of it."

It is estimated that about 200 families in the UK could be suffering from Alström Syndrome.

Kerry Leeson-Beevers, whose 11 year old son Kion has Alström Syndrome, comments, "Kion spent the first year of his life in and out of hospital and was diagnosed with several stand-alone conditions before eventually being diagnosed with the extremely rare and complex condition, Alström Syndrome. Gaining a better understanding of the condition has helped me a great deal such as when he put on a lot of weight after he stopped breast feeding. It has enabled me to effectively manage his diet and exercise and Kion's weight has stabilised over the past few years.

"We continue to be supported by Alström Syndrome UK and Kion is very closely monitored by the specialised multi-disciplinary team at Birmingham Children's Hospital. Life is not easy for him but despite everything he leads a very active and fulfilled life and he is an intelligent and caring boy."

CILIA 2012 - "Cilia in Development and Disease" will take place at the Institute of Child Health, London on 16-18 May. It is the first international scientific conference organised by the Ciliopathy Alliance and presents a real boost for European rare disease research as the three big cilia conferences are based in the USA.

Renowned scientists and clinicians will present their latest research and best practice on this important new area of human biology. The conference also presents the opportunity for patients and parents of children who are affected by some of these conditions to meet support groups as well as clinicians and scientists from leading institutes worldwide.