A cross-disciplinary project charged with advancing wellbeing research, has won £10,000 of research funding to run a project for new UCL students and for staff nearing retirement. 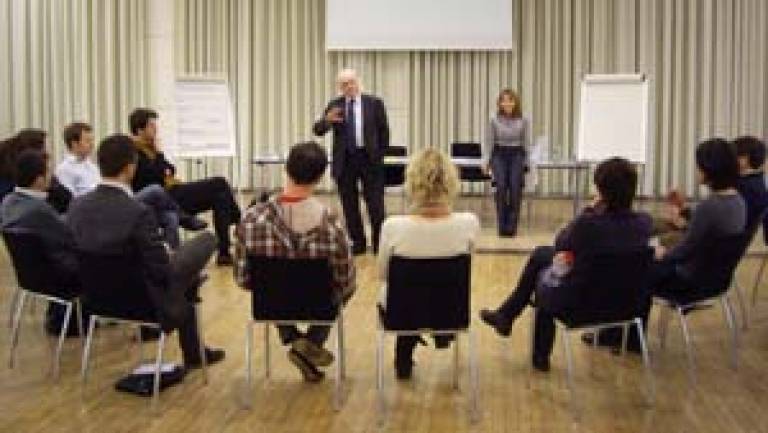 The proposal was submitted as part of UCL Wellbeing Week.


The team who submitted the winning proposal was made up of Sophie Bostock (UCL Epidemiology & Public Health), Helene Joffe (UCL Psychology), Matthew Pope (UCL Archaeology) and Tse-Hui Teh (UCL Bartlett School of Planning). Their proposal was entitled Windows to Wellbeing.

UCL Wellbeing Week was organised by the UCL Grand Challenge of Human Wellbeing and UCL Crucible and ran from 13 - 17 February 2012. The week culminated in a facilitator-led workshop featuring an expert panel of judges from UCL. The workshop aimed to bring together a cross-disciplinary group of researchers who could collaborate to advance wellbeing research. It ended a week of discussions and lectures designed around addressing wellbeing questions in a new way.

Helene Joffe, a member of the winning team commented: "Wellbeing week provided inspirational talks and debates from major figures in the field. These were used to spark the research imaginations of those competing for the Crucible research prize.

"The day involved a major interdisciplinary mixing of ideas. The winning team included a social psychologist, psychobiologist, archeologist and planner. Teams were formed less than an hour before the judging panel arrived. This forced teams into a surge of creativity, which was enjoyable and stressful in equal measure!"

"The day involved a major interdisciplinary mixing of ideas."

The winning project Windows to Wellbeing is based on the premise that a sense of wellbeing is related to positive feelings, such as happiness and life satisfaction. The research aims to investigate whether interventions at times of transition (such as beginning university or retiring) can be effective, which factors are important at different life stages and to test whether inter-generational interaction can be beneficial.

The study will run for a year, and will involve running a wellbeing intervention with new UCL students and staff about to retire. The team are particularly interested in establishing a social networking site to foster intergenerational wellbeing.