Daniel Wolpert is Head of the Sensorimotor Learning Group at the Department of Engineering, University of Cambridge. He was the invited guest speaker at the 13th Annual Queen Square Symposium, which took place on the Friday 16th of March 2012.

Q: Thank you very much for taking time to answer some of our questions. You started off by doing medicine and then a PhD in physiology, how is it that you have ended up working in engineering and robotics?

Actually I did Maths in Cambridge for one year but the problem was that medics were having much more fun than mathematicians, so I thought I could have more fun by doing Medicine. However, at that time, networks and how you could model the brain was a really big thing and I got excited about the brain. So in 1988, I did a PhD in Physiology. But I was always interested in maths, so I went to MIT for my postdoc and that's where I really got involved in the computational side. This experience was an eye opener. I came back to UCL and worked here for 10 years. It was wonderful but I was a very computational person in a very biological institute. Then I got a phone call from Cambridge asking me I was interested in a chair in Engineering and I said "I think you got the wrong person". They wanted to create a sort of bioengineering group and wanted to hire a biologist with an interest in engineering. That was a very attractive thought. My head of department now says 'you have to stop saying you're a biologist and start calling yourself an engineer', but I still find that quite hard. I'm really a neuroscientist; it's in my nature!

Q: Could you tell us what are the main techniques you use in you lab?

We make use of virtual reality systems and robotic interfaces. Virtual reality allows us to control our environment in a very precise, computer-based way and that allows us to test our theories. We develop theories and then design controlled experiments using this apparatus, testing the theories on human subjects. Our plan over the next 5 or 10 years is to make the experimental environments more realistic. For example, we have really good understanding of very simple tasks, but I doubt any study could explain how we tie our shoelaces, because that task is more complicated. Studying simple tasks is great but we have to move to real-world tasks and I think there will be extra complexity once we reach that point.

Q: Do you think that robots are good models of how humans really behave?

I think that if we really understood how humans behaved we would apply that to robotic models. It is interesting to ask whether it is a hardware or a software problem. I think part of the problem with robotics is that they got tied into trying to understand vision. Although vision is a very difficult problem to solve it seems that when people lose their vision they can still carry out motor tasks quite well. However, when humans lose their sense of touch they become completely incapacitated. So I believe that robotic research focuses on the wrong modality. Research should focus on touch but robotic devices lack any sort of skin. Artificial skin could therefore transform and improve robotics. 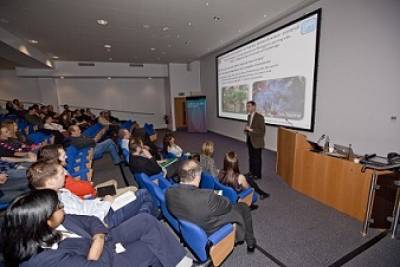 Q: In previous talks you have given you said that the only reason we have a brain is so that we could make complex and adaptable movements. Do you think the majority of neuroscientific field would agree with you?

Such statements have been made by scientists before, so I think nobody would disagree. The only point I'm making is that the way the brain evolved is to maximise survival. You can't promote survival unless your muscles contract and make actions. Everything else has to do with serving the action. If having a complete memory of childhood was important for movement you would have it. The fact that we barely remember anything from our childhood just reinforces the fact that we don't need it for movement. It's only things that could be important for action that are stored. However I want to be clear. It is not to say that people who can't move are somewhat worthless, that's not the point. I make my point from an evolutionary perspective.

Q: So, if movement is the main reason we have a brain, and a central nervous system, why haven't we evolved spinal cord regeneration?

I don't know. I would assume it's costly (to evolution) to have regeneration.

Q: Do you think that robotics will eventually overtake regenerative therapy as a means for spinal cord treatment?

No, I don't think so. Brain machine interfaces are very big at the moment, and I think there are some cool things about it but I don't see it being particularly more promising than regeneration. However, if you lose an arm for example, there is some very impressive work currently going on where the arm is controlled via implants on the chest.

I think in the end if you're going to understand action you're going to have to understand all the other processes going on in the brain, like cognition, because they all play into action. To understand why we think the way we do, why we perceive the way we do, you have to actually realise what the ultimate goal is. A lot of people will study vision completely in isolation of action without remembering that the whole point of the visual system is actually to drive action. I'm hoping that the field will merge at some point.

One thing I'd like to see is more interdisciplinary research. When I look at British science, there are very few "Neuroscience" departments that pull people together. In other universities you have huge institutes with engineers, physicists and biologists together. What I would like to see happen in Cambridge is mixing many disciplines all together in one institute. I think the future of Neuroscience lies in mixing people up.

Q: Your father is Lewis Wolpert. What did he teach you about science and what tips did he give you to become a successful researcher?

We talked a lot about science when I was young. I remember going on walks and he would ask me scientific questions. He's a little competitive now. I remember when I got my first Nature paper, I told him "I'm so glad I have a Nature paper" and he said "Oh I thought you already had one" (laughs). It was a bit difficult when we were both at UCL, it was a bit weird being in the same institute as him, but overall he's been extremely supportive. He keeps saying to me "Why can't you tell me why a bird can land on a wire?"

Q: Has anyone inspired you in any way?

I think my postdoc supervisor, Michael Jordan, inspired me. He is one of the most impressive scientists I have ever met, but he is terrifying as well. What he really taught me was self subsistence. You never took an idea to him until you really worked it through, or he would demolish it instantly. I remember in one of our lab meetings I presented a paper for 3 hours and at the end he said "Thank you Daniel I know no more about that paper now than when we began", which was horrible but he was right and that made you up your game. The thing that I really learnt from him was how to write a paper. When I first wrote a paper he (Michael Jordan) said "This is no good". Now I teach my PhD students how to write a paper - and some people think I'm crazy - by sitting at the computer and writing it together. They will write the first draft but I won't edit it unless we're sitting down together so that they know why I change certain things or what is good about the paper. I love writing with people, it is much more fun.

Q: Considering you have given some very good talks recently, do you have any tips for the PhD students that presented their posters today at the Queen Square Symposium on how to give engaging presentations?

Practise, practise, practise. I spend a lot of time practising talks, over and over again, thinking about how to make them clearer and understandable. I wouldn't say I've always been a good speaker, I improved a lot. I try to make the talks more interesting. But there's a trade off because in order to make the talk fun I skip a lot of detail, unless I was giving a talk specifically on motor control. But practise in front of people and rehearse in front of the mirror. Practise is what it's all about.