A genetic study based at UCL Institute of Neurology and the NIH in the United States has identified two riboflavin transporter genes that are defective in children with a type of motor neuron disease called Brown-Vialetto van Laere syndrome. 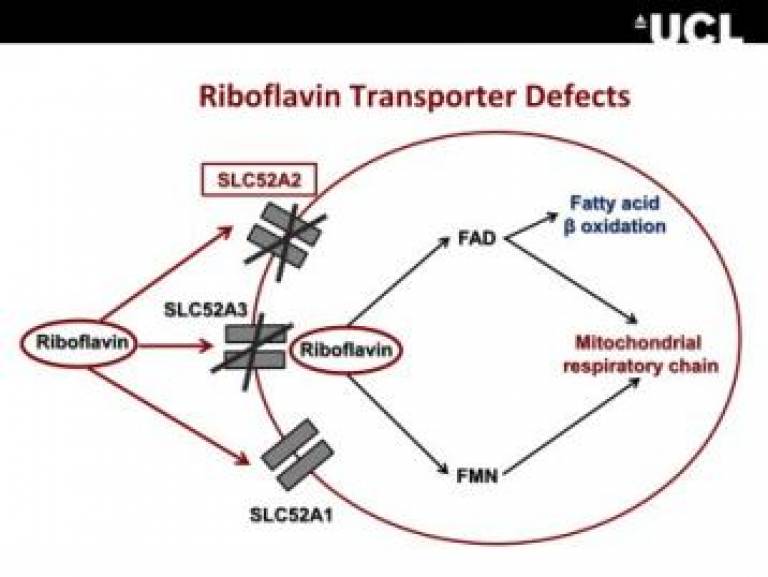 The onset of disease is generally in infancy or adolescence. Children develop deafness, speech and swallowing problems, face and limb weakness and breathing problems. Many of them require a long term tracheostomy for ventilation and some never leave the intensive care unit and die very young. Prior to this finding, treatment was restricted to supportive care. Although the disorder is rare, it has been identified throughout the world in isolated individual children and also in small families where more than one person is affected.

The two genes identified which both encode riboflavin transporters are called SLC52A3 and SLC52A2, Defects in the most recently found gene (SLC52A2) have now been identified in over 10 families and lead to a lack of riboflavin uptake in the cell and subsequent metabolic sequelae. Treating children with high-dose riboflavin leads to significant improvement in all aspects of their condition, although the use of this treatment is still in the early stages.

This is the first treatable cause of a type of motor neuron disease, thus highlighting the importance of carrying out the genetic test in all children with a similar clinical picture so that treatment can begin early.

At UCL Institute of Neurology the research was led by Professor Henry Houlden (h.houlden@ucl.ac.uk) and colleagues at the MRC Centre for Neuromuscular Diseases  and in the United States by Dr Andy Singleton at the NIH.

Details of the genetic test and riboflavin treatment protocol can be obtained by contacting Professor Houlden.