A UCL academic is part of a choir making a bid for Christmas number one single. 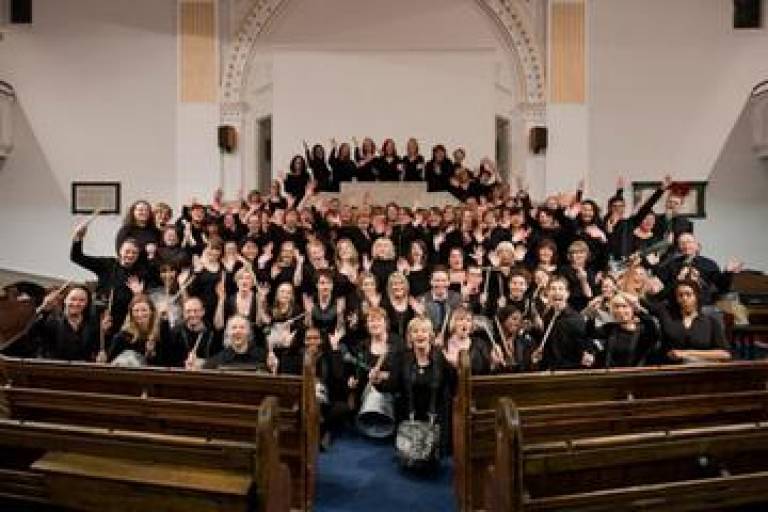 Professor Valerie Hazan (UCL Speech Hearing and Phonetic Sciences) sings with the Games Maker choir, made up of more than 300 volunteers from this summer's Olympic and Paralympic Games. Their single, 'I Wish For You The World', is written by Alistair Griffin, who has written a number of sports-related tracks.

The choir performed live on Sunday evening during the BBC's Sports Personality of the Year broadcast on Radio 5 Live, and has received support from several Olympians, Lord Coe, Chair of London 2012, Prime Minister David Cameron and the Mayor of London, Boris Johnson.

Professor Hazan, who was a Security Team Leader at the Olympic Park, commented on the experience of the single: "It has been amazing to see this Choir go from a small group performing in the Olympic Park grandstand… to a 350-plus strong choir releasing a single at Christmas and appearing in the national media. The GM Choir is run by many volunteers putting in a lot of time and effort and full use is being made by all choir members of social media (Facebook and Twitter) to spread the word."

All proceeds from the single will be donated to the British Olympic Foundation and British Paralympic Association, which aim to develop and create opportunities for aspiring young Olympians and Paralympians. You can buy it now on iTunes and Amazon.

Image: the Games Maker choir with the Pandemonium Drummers who performed at the Opening Ceremony