Warming climate unlikely to cause extinction of ancient Amazon trees

New genetic analysis has revealed that many Amazon tree species are likely to survive man-made climate warming in the coming century, contrary to previous findings that temperature increases would cause them to die out. 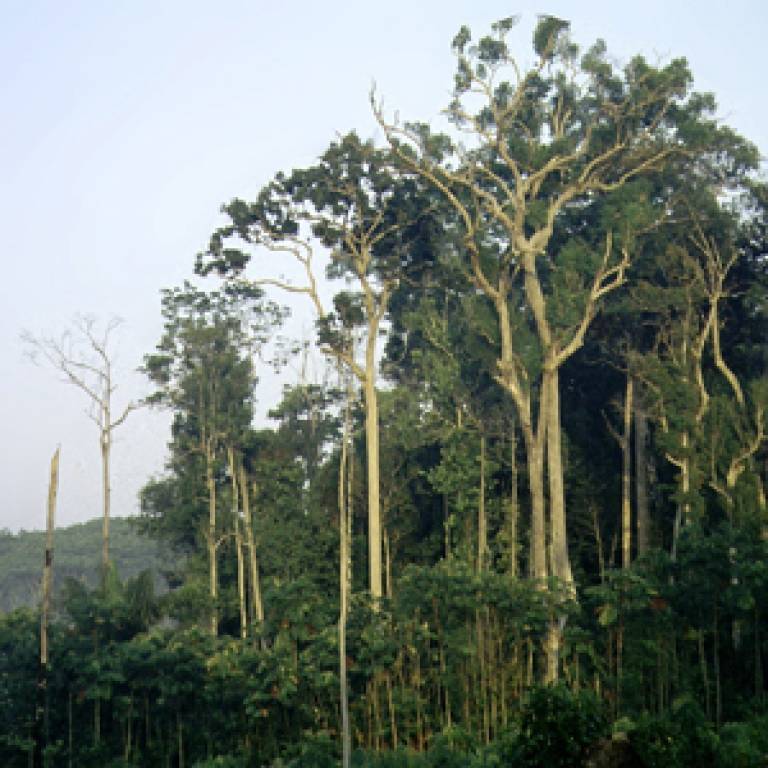 A study, published in the latest edition of Ecology and Evolution, reveals the surprising age of some Amazonian tree species - more than 8 million years - and therefore shows that they have survived previous periods as warm as many of the global warming scenarios forecast for the year 2100.

The authors write that, having survived warm periods in the past, the trees will likely survive future warming, provided there are no other major environmental changes. Although extreme droughts and forest fires will impact Amazonia as temperatures rise, the trees will likely endure the direct impact of higher temperatures. The authors recommend that as well as reducing greenhouse gas emissions to minimise the risk of drought and fire, conservation policy should remain focused on preventing deforestation for agriculture and mining.

The study is at odds with other recent research, based on ecological niche-modeling scenarios, which predicted tree species' extinctions in response to relatively small increases in global average air temperatures.

Study co-author Dr Simon Lewis (UCL Geography) said the findings were good news for Amazon tree species, but warned that drought and over-exploitation of the forest remained major threats to the Amazon's future.

Dr Lewis said: "The past cannot be compared directly with the future. While tree species seem likely to tolerate higher air temperatures than today, the Amazon forest is being converted for agriculture and mining, and what remains is being degraded by logging, and increasingly fragmented by fields and roads.

"Species will not move as freely in today's Amazon as they did in previous warm periods, when there was no human influence. Similarly, today's climate change is extremely fast, making comparisons with slower changes in the past difficult.

"With a clearer understanding of the relative risks to the Amazon forest, we conclude that direct human impacts - such as forest clearances for agriculture or mining - should remain a focus of conservation policy. We also need more aggressive action to reduce greenhouse gas emissions in order to minimise the risk of drought and fire impacts to secure the future of most Amazon tree species."

The 12 tree species used in the study are broadly representative of the Amazon tree flora. Samples were collected in Panama, Ecuador, Brazil, Peru, French Guiana and Bolivia.

To determine the age of each tree species researchers extracted and sequenced DNA, analysing the number of genetic mutations. Using a molecular clock approach and population genetic models they estimated how long it would take for each of the species to accumulate the observed number of mutations, providing a minimum age for each species. They determined that nine of the tree species had existed for at least 2.6 million years, seven for at least 5.6 million years, and three for more than 8 million years.

With reference to climatic events that have occurred since those tree species emerged, the authors inferred that the tree species had previously survived warmer climates. Air temperatures across Amazonia in the early Pliocene Epoch (3.6 million to 5 million years ago) were similar to Intergovernmental Panel on Climate Change (IPCC) mid-range projections for the region in 2100. Air temperatures in the late Miocene Epoch (5.3 to 11.5 million years ago) were about the same as IPCC projections for the region in 2100 using some of the highest carbon-emission scenarios.