Training human volunteers to control their own brain activity in precise areas of the brain can enhance fundamental aspects of their visual sensitivity, according to a new study in the Journal of Neuroscience. 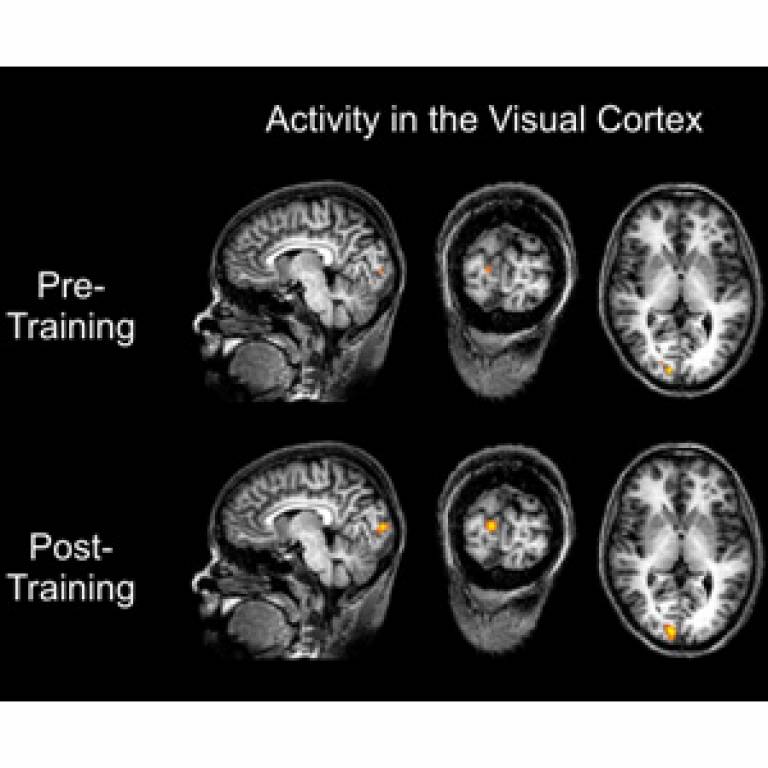 This non-invasive 'neurofeedback' approach could one day be used to improve brain function in patients with abnormal patterns of activity, for example stroke patients.

Researchers at the Wellcome Trust Centre for Neuroimaging at UCL used non-invasive, real-time brain imaging that enabled participants to watch their own brain activity on a screen, a technique known as neurofeedback. During the training phase, they were asked to try and increase activity in the area of the brain that processes visual information, the visual cortex, by imagining images and observing how their brains responded.

After the training phase, the participants' visual perception was tested using a new task that required them to detect very subtle changes in the contrast of an image.

When they were asked to repeat this task whilst clamping brain activity in the visual cortex at high levels, they found that those who had successfully learned to control their brain activity could improve their ability to detect even very small changes in contrast.

We've shown that we can train people to manipulate their own brain activity and improve their visual sensitivity, without surgery and without drugs.

This improved performance was only observed when participants were exercising control of their brain activity.

Lead author Dr Frank Scharnowski, who is now based at the University of Geneva, explains: "We've shown that we can train people to manipulate their own brain activity and improve their visual sensitivity, without surgery and without drugs".

In the past, researchers have used recordings of electrical activity in the brain to train people to get better at various tasks, including decreased reaction times, altered emotional responses and even enhanced musical performance.

In this study, the researchers used functional magnetic resonance imaging (fMRI) to provide the volunteers with real-time feedback on brain activity. The advantage of this technique is that you can see exactly where in the brain the training is having an effect, so you can target the training to particular brain areas that are responsible for specific tasks.

"The next step is to test this approach in the clinic to see whether we can offer any benefit to patients, for example to stroke patients who may have problems with perception, even though there is no damage to their vision," adds Dr Scharnowski.

The study was funded by the Wellcome Trust, Swiss National Science Foundation and the European Union.