Brain scans have revealed distinctive features in the brain structure of karate experts, which could be linked to their ability to punch powerfully from close range. 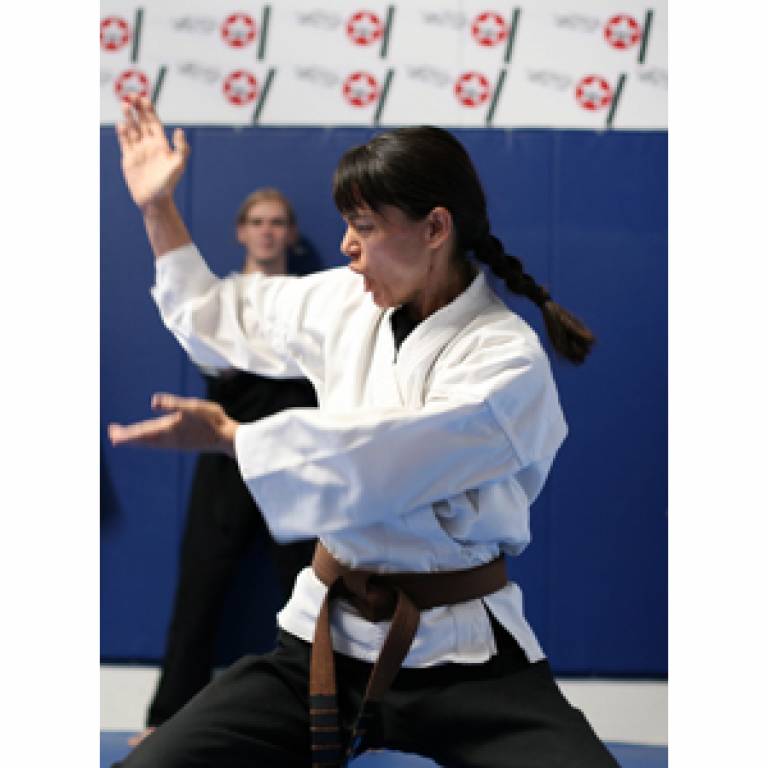 Researchers from UCL and Imperial College London found that differences in the microstructure of connections in the brain were correlated with how black belts and novices performed in a test of punching ability.

Karate experts are able to generate extremely powerful forces with their punches, but how they do this is not fully understood. Previous studies have found that the force generated in a karate punch is not determined by muscular strength, suggesting that factors related to the control of muscle movement by the brain might be important.

The study, published in the journal Cerebral Cortex, looked for differences in brain structure between 12 karate practitioners with a black belt rank and an average of 13.8 years' karate experience, and 12 control subjects of similar age who exercised regularly but did not have any martial arts experience.

The researchers tested how powerfully the subjects could punch, but to make useful comparisons with the punching of novices they restricted the task to punching from short range - a distance of 5 centimetres. The subjects wore infrared markers on their arms and torso to capture the speed of their movements.

As expected, the karate group punched harder. The power of their punches seemed to be down to timing: the force they generated correlated with how well the movement of their wrists and shoulders were synchronised.

Brain scans showed that the microscopic structure in certain regions of the brain differed between the two groups. Each brain region is composed of grey matter, consisting of the main bodies of nerve cells, and white matter, which is mainly made up of bundles of fibres that carry signals from one region to another. The scans used in this study, called diffusion tensor imaging (DTI), detected structural differences in the white matter of parts of the brain called the cerebellum and the primary motor cortex, which are known to be involved in controlling movement.

These findings show that success in sport might not just be due to physical attributes, but also to differences in athletes' brains.

The differences measured by DTI in the cerebellum correlated with the synchronicity of the subjects' wrist and shoulder movements when punching. The DTI signal also correlated with the age at which karate experts began training and their total experience of the discipline. These findings suggest that the structural differences in the brain are related to the black belts' punching ability.

"We are just beginning to understand how skills in different areas of expertise are associated with variations in brain structure. These findings show that success in sport might not just be due to physical attributes, but also to differences in athletes' brains," said co-author Professor Masud Husain of the UCL Institute of Cognitive Neuroscience.

"Much of the research on how the brain controls movement has been based on examining how diseases can impair motor skills," said Dr Ed Roberts, from the Department of Medicine at Imperial College London, who led the study. "We took a different approach, by looking at what enables experts to perform better than novices in tests of physical skill.

"The karate black belts were able to repeatedly coordinate their punching action with a level of coordination that novices can't produce. We think that ability might be related to fine tuning of neural connections in the cerebellum, allowing them to synchronise their arm and trunk movements very accurately.

"We're only just beginning to understand the relationship between brain structure and behaviour, but our findings are consistent with earlier research showing that the cerebellum plays a critical role in our ability to produce complex, coordinated movements.

"There are several factors that can affect the DTI signal, so we can't say exactly what features of the white matter these differences correspond to. Further studies using more advanced techniques will give us a clearer picture."