UCL scientists and engineers are to provide instruments for two major space missions which have been selected by the European Space Agency (ESA). 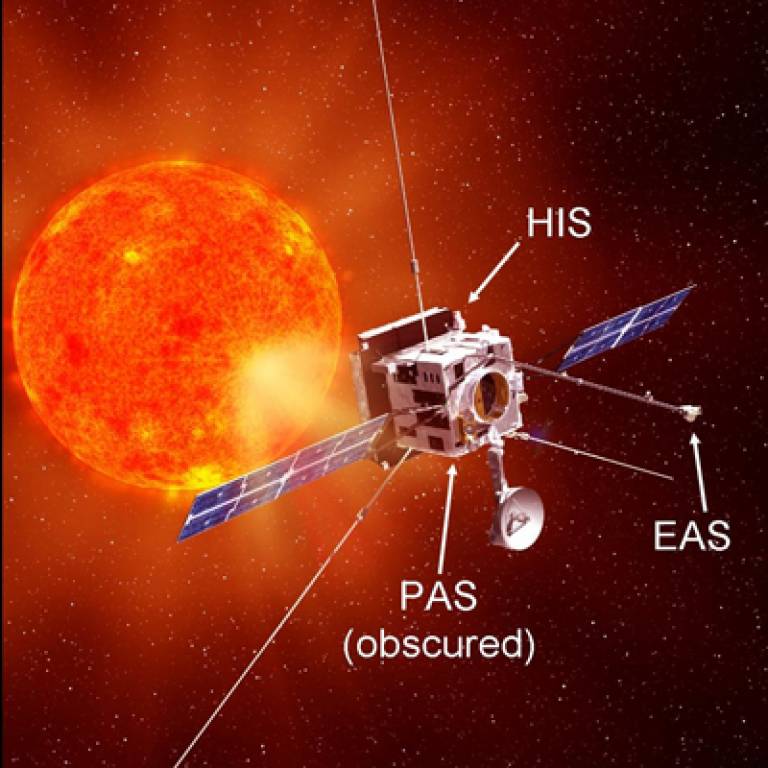 The first mission, Solar Orbiter, is the most ambitious ever undertaken to study the Sun and has been scheduled for launch in 2017. Euclid, which will provide Hubble Space Telescope-quality images across the whole sky in the search for dark matter, will launch in 2019.

Solar Orbiter will be sent into the inner solar system (as close as the orbit of Mercury) and will carry a set of telescopes to image the Sun and a complementary set of instruments to sample the outflowing solar wind. The mission will reveal how the Sun creates and controls the solar wind and thereby affects the environments of all the planets.

This mission scenario will enable the spacecraft to both view the Sun from close in and to view its polar regions. In addition, a set of instruments on the spacecraft will also directly sample the electromagnetic fields and charged particles emitted from the solar surface and ejected out into interplanetary space. Combining these measurements with the observations of activity on the solar surface will help Solar Orbiter scientists to discover how processes on the Sun create and control the interplanetary environment and ultimately affect the Earth and other planetary systems.

UCL has major roles in two key instruments out of the ten which have already been selected to fly on the Solar Orbiter mission. Professor Chris Owen (UCL Mullard Space Science Laboratory) is Principal Investigator for the Solar Wind Analyser (SWA) Suite. The SWA suite has the key task of characterizing the vast majority of the electron, proton and α-particle populations. These measurements provide the means by which plasma processes observed remotely on the Sun can be linked to their output exhausts in the solar wind.

Professor Owen said: 'We are really pleased to have successfully passed this critical milestone, as the team have been working hard towards getting this mission selected for a number of years."

Professor Louise Harra (UCL Mullard Space Science Laboratory) is Co-PI and lead of the Science Working Group for the Extreme Ultra-violet Imagers (EUI) on Solar Orbiter. The EUI instrument suite is composed of two high resolution imagers and one dual band full-Sun imager. MSSL is responsible for the design, manufacture and delivery of the SO-EUI Common Electronics Box and on-board flight software. It is also responsible for the development of ground support equipment and its software.

Professor Harra commented: 'This will be the first time we have ever had a spacecraft in an orbit passing so close to the Sun, and carrying telescopes to image the solar atmosphere. The spatial resolution will be spectacular, and will allow us to understand what creates and accelerates the solar wind that the planets are all immersed in."

At the heart of Euclid is a massive optical digital camera - one of the largest such cameras put into space - and UCL astronomers are leading efforts to design and build this new instrument.

"This camera can take pictures of the sky more than 100 times larger than the Hubble telescope can" comments Professor Mark Cropper (UCL Mullard Space Science Laboratory) who is the leader of the optical camera team. "Each frame from our instrument is the equivalent of nearly 300 HDTV screens, and one arrives every 15 minutes" explains Cropper. "It will image half of the sky in six years, reaching out to the distant parts of the Universe".

Dr Richard Cole (UCL Mullard Space Science Laboratory) and project manager for the optical camera, says: "UCL will be leading a consortium of research groups across four nations to design and build our instrument. Extremely high levels of performance will be needed from the detector electronics, to be built here at UCL, to achieve the science objectives of the mission."

A key goal of Euclid and the VIS instrument is to capture light from distant galaxies and study their detailed shapes. A key prediction of Einstein's theory of General Relativity is that light from these galaxies should be bent along the light of sight to us by large clumps of matter. Euclid will therefore, see the "dark matter" that is believed to make up 20% of our Universe. The gravitational lensing signal affects any single galaxy by only one part in a million, making it incredibly hard to see. Euclid will need to observe billions of galaxies to see the effect with adequate clarity.

"Observations of dark matter are wonderful in themselves", comments Professor Ofer Lahav (UCL Physics & Astronomy), "but even better is that Euclid can also see the effects of dark energy, a mysterious ingredient that was discovered only a decade ago and appears to be driving the accelerated expansion of our Universe".

No-one yet knows what dark energy could be, but Euclid will bring us much closer to answering this mystery. Dr Filipe Abdalla (UCL Physics & Astronomy) added: "Euclid will also measure the motions of tens of millions of galaxies and from that we can test the strength of gravity in the distant Universe Any differences from the expected would indicate that our ignorance of gravity on cosmological scales is masquerading as dark energy."

Astronomers and physicists believe that Euclid will revolutionise our knowledge of the Universe, from dark matter and dark energy, to weighing neutrinos, to exploring the details of how galaxies evolve. The Euclid dataset will be a treasure trove for astronomers for decades to come, allowing everyone to stare anywhere in the Cosmos with Hubble-like clarity.