The latest results from an expedition to Mount Everest that looked at the body's response to low oxygen levels suggest that drugs or procedures that promote the body's production of a chemical compound called nitric oxide (NO) could improve the recovery of critically ill patients in intensive care. 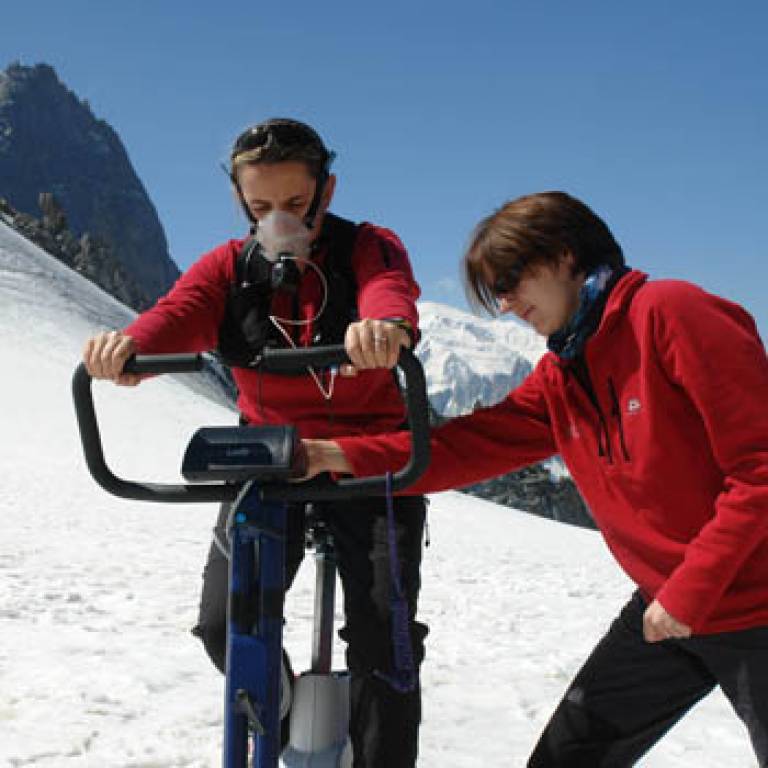 Many critically ill patients suffer from a shortage of oxygen (a condition known as 'hypoxia'), which can be life-threatening. NO is produced by virtually every cell and organ in the body where it serves many important functions including the regulation of blood pressure, learning and memory formation, and protecting us from infectious diseases.

This work, the product of collaboration between scientists at UCL and the University of Warwick, made use of blood samples and results collected during the 2007 Caudwell Xtreme Everest (CXE) expedition. The results show that NO production and activity are elevated in people who live at near sea-level altitudes ('lowlanders') that ascend to altitude, leading to changes in blood flow in the smallest blood vessels.

Published today in Scientific Reports, the new open access journal from Nature Publishing Group, the paper suggests that interventions to alter NO production - some of which already exist in the form of drugs or gas - may benefit critically ill patients in whom oxygen availability is limited.

This is the first time such effects have been documented in a larger group of lowlanders and is consistent with earlier data from residents of the Tibetan plateau ('highlanders') showing their normal NO levels to be much elevated compared to people living near sea-level. Doctors believe increased NO may be beneficial for people, particularly patients with low levels of oxygen in their blood, because it increases the body's ability to tolerate and adapt to a low oxygen supply.

The paper is based on experiments carried out at varying altitudes during the CXE expedition, a study masterminded and led by scientists at UCL, with blood and statistical analyses carried out by scientists at the University of Warwick (made possible, in part, by support from the Medical Research Council and the Warwick Systems Biology Doctoral Training Centre).

The study participants consisted of 198 trekkers and 24 climbers, including doctors and scientists. The CXE team made the first ever measurement of the oxygen level in human blood at 8400m on Mount Everest. This was the centrepiece of an extensive and continuing programme of research into hypoxia and human performance at extreme altitude aimed at improving the care of the critically ill and other patients where hypoxia is a fundamental problem.

Dr Denny Levett, joint lead author of the paper from the UCL Centre for Altitude, Space and Extreme Environment Medicine and Deputy Research Lead of the CXE expedition, said: "Climbing to extreme altitudes puts the body in an environment with very low oxygen availability, similar to the experience of patients in intensive care with diseases affecting the heart, lungs or vascular system."

"By taking blood samples from hypoxic, but otherwise healthy, individuals we have been able to show that the body's natural response to low oxygen availability is to increase the production of nitric oxide. Thus, elevated NO occurs not just in those who live at high altitudes permanently, but also in lowlanders who are trying to adapt to high altitude conditions."

The analytical team at Warwick University is world-renowned for its ability to measure the very low levels of NO metabolites in biological samples.

Dr Martin Feelisch, joint senior author of the paper and a Professor of Experimental Medicine and Integrative Biology at Warwick Medical School, who was responsible for the analytical work, said: "In the years ahead, this research may herald a change in emergency treatment and intensive care. It suggests there is an alternative way of alleviating the consequences of low oxygen levels by creating a more sustained tolerance to those low levels through treatments which boost NO production."

The research also shows a difference between individuals in terms of the level of their NO response at altitude. The sample size is too small to say with confidence why this is. However, individuals with greater experience of climbing at altitude had a greater NO response early in the expedition, suggesting their bodily constitution with respect to NO was different from climbers with less experience of ascent to high altitude. Similar factors may explain the differences in disease outcome between patients on the intensive care unit, the reasons of which are not well understood.