Herschel finds source of cosmic dust in a stellar explosion

ESA's Herschel Space Observatory is helping unravel the mystery of the origin of cosmic dust. 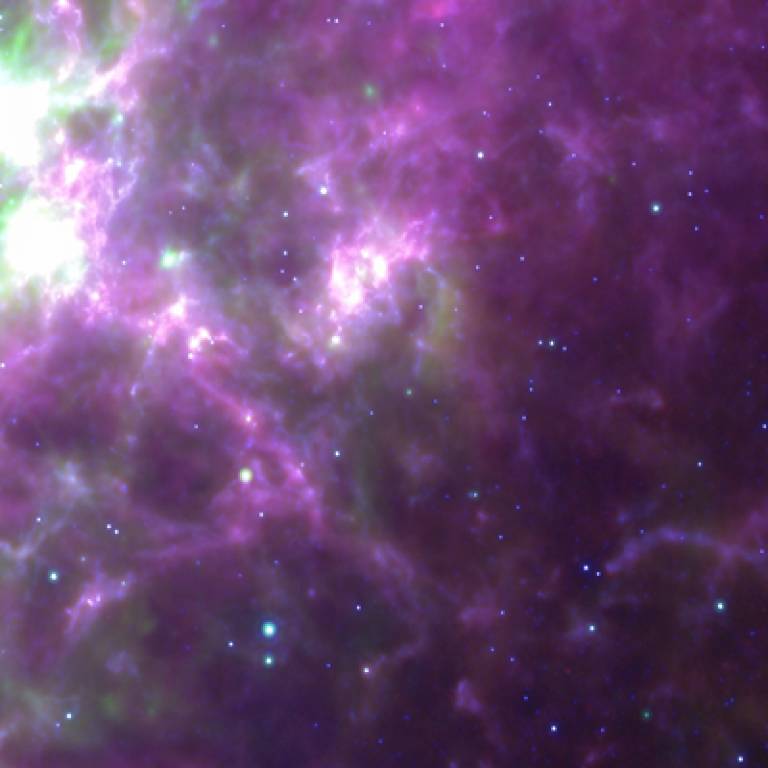 Thanks to the resolution and sensitivity of Herschel, astronomers have been able to detect cosmic dust from a supernova, adding weight to the theory that these cosmic fireworks are responsible for its creation.

The origin of the dust is important because it plays a crucial role in the formation of stars, particularly billions of years ago when star formation was at its peak. Galaxies like our own Milky Way are not simply collections of stars, but also contain clouds of gas and dust, crucial to the formation of new stars.

"Interestingly, this brand new clue does not come from observations of very distant galaxies, but from one of our closest galactic neighbours," comments Mikako Matsuura from UCL Physics & Astronomy, who led a recent study published in Science Express. Supernovae in our Galaxy are very rare, but 24 years ago astronomers were treated to one in the Large Magellanic Cloud, a small galaxy about 160,000 light years away.

On 23rd February 1987 the aging star could no longer support its own weight and collapsed in a violent supernova. The resulting shockwave energised material in a disc of gas and dust around the star, and is still travelling outwards at speeds of up to 6000 km/s (13 million miles per hour).

The pulse of light from the supernova lit up a ring of material around a light year across (10 million million km), dozens of times the size of our own Solar System. This material glows in visible and ultraviolet light, as well as in x-rays. Small amounts of dust in the ring were warmed to a temperature of -100 Celsius, and this has previously been seen glowing faintly in infrared light.

Twenty three years after the initial explosion the Herschel Space Observatory observed the supernova remnant. As well as the warm dust in the glowing ring, the new measurements have shown that there is dust in the centre of the remnant with a temperature of below -250 Celsius, just 20 degrees above absolute zero. There is much more of this cold dust than the warm dust previously seen - in fact, enough to form more than 200,000 Earths.

"We didn't expect to see SN1987A when we planned the survey," explains Margaret Meixner, from the Space Telescope Science Institute in Baltimore, USA, and who leads the HERITAGE survey for which these observations were taken. "Based on our existing knowledge of dust in supernovae, we could not have anticipated that Herschel would have detected this source. It has definitely been one of the biggest surprises of our project," she adds.

The dust was formed from material that was thrown away from the star in the initial explosion. If similar amounts are created in all such explosions, this could explain the origin of much of the dust seen in the Large Magellanic Cloud.

"Since no facility comparable to Herschel has existed during the past two decades, we cannot say for certain exactly when the large amount of cold dust was produced," notes Matsuura. "But we have proved that a supernova can produce an amount of dust comparable to the mass of the Sun over a period of, at most, a couple of dozen years-a blink of an eye with respect to a star's lifetime," she adds.

The observations of SN1987a are crucial for understanding the remnants of supernovae that Herschel is observing in our own Galaxy, which exploded hundreds or thousands of years ago. But this latest result also has much further reaching consequences. "With objects like SN1987a, we can investigate details that are almost impossible to discern in supernovae inside more distant galaxies. This helps us improve our understanding of these stellar explosions, which we can then apply to the broader context of galaxy evolution," explained Matsuura.

Most of the galaxies seen in the very distant Universe appear bright in the far-infrared as seen by Herschel, but very faint in visible light. This is because they contain large quantities of dust, which blocks most of the visible light from the stars in the galaxies, and these observations by Herschel of SN1987a help to explain where most of that dust comes from. Astronomers are very interested in this because these galaxies are seen as they were 8-10 billion years ago, a period in the Universe when stars were forming at rates higher than ever before or since.

These observation show the power of Herschel for investigating the origin of dust across the ages, from our own Galactic neighbourhood to galaxies in the distant Universe", remarked Matt Griffin, from Cardiff University and principal investigator of the SPIRE instrument. "In turn, this is helping us understand the formation of the stars we see today".

Image: The region around SN1987a as seen by Herschel and NASA's Spitzer space telescope. The purple material is cold, diffuse dust seen by the SPIRE instrument onboard Herschel, while the green and blue are warmer dust and stars seen at shorter infrared wavelengths by Spitzer. The supernova itself is seen as the point in the centre of the circle.

Coverage in the New York Times