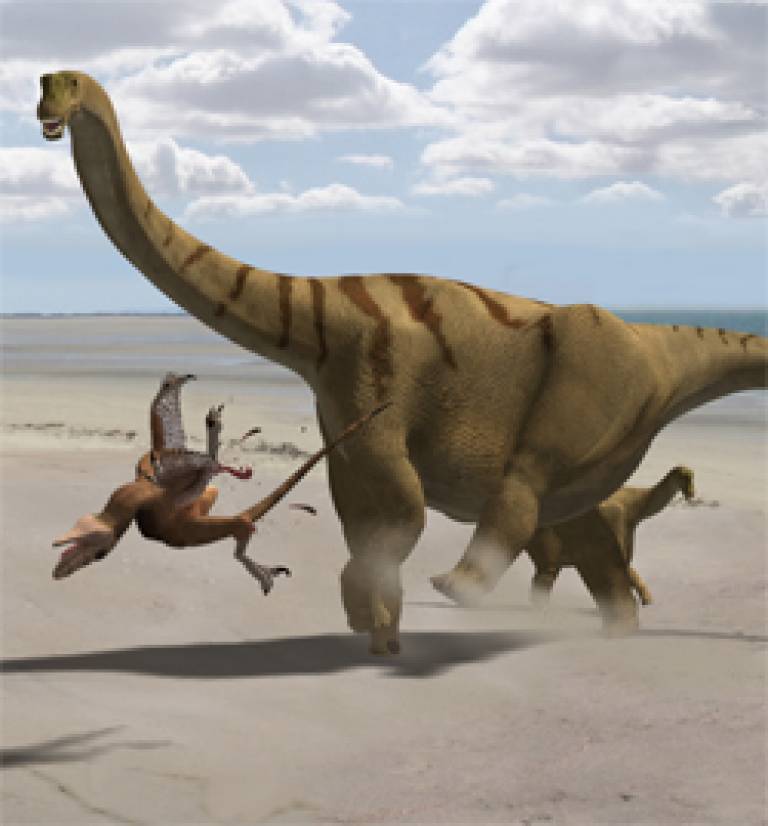 A new dinosaur named Brontomerus mcintoshi, or "thunder-thighs" after its enormously powerful thigh muscles, has been discovered in Utah, USA. The new species is described in a paper recently published in the journal Acta Palaeontologica Polonica by an international team of scientists from the U.K. and the U.S.

A member of the long-necked sauropod group of dinosaurs which includes Diplodocus and Brachiosaurus, Brontomerus may have used its powerful thighs as a weapon to kick predators, or to help travel over rough, hilly terrain. Brontomerus lived about 110 million years ago, during the Early Cretaceous Period, and probably had to contend with fierce "raptors" such as Deinonychus and Utahraptor.

The fossilised bones of two specimens of Brontomerus mcintoshi - an adult and a juvenile - were rescued from a previously looted and damaged quarry in eastern Utah by researchers from the Sam Noble Museum, U.S. Palaeontologists speculate that the larger specimen is the mother of the younger and would have weighed around 6 tons, about the size of a large elephant, and measured 14 meters in length.  At a third of the size, the smaller specimen would have weighed about 200 kg, the size of a pony, and been 4.5 m long.

The authors classified the new genus based on an incomplete skeleton including bones from the shoulder, hip, ribs, vertebrae and some unidentifiable fragments. They used the bones to identify Brontomerus' unique features, primarily the shape of the ilium (hip bone), which, in the case of Brontomerus, is unusually large in comparison to that of similar dinosaurs.

The wide, blade-shaped bone projects forward ahead of the hip socket, providing a proportionally massive area for the attachment of muscles. The shape of the bone indicates that the animal would likely have had the largest leg muscles of any dinosaur in the sauropod family. This is reflected in the name Brontomerus, which literally means "thunder-thighs." The dinosaur's species name, mcintoshi, was chosen in honour of John "Jack" McIntosh, a retired physicist at Wesleyan University, Conn., and lifelong avocational palaeontologist.

"Brontomerus mcintoshi is a charismatic dinosaur and an exciting discovery for us," said first author Dr Mike Taylor, a researcher in the Department of Earth Sciences at University College London. "When we recognised the weird shape of the hip, we wondered what its significance might be, but we concluded that kicking was the most likely.  The kick would probably have been used when two males fought over a female, but given that the mechanics were all in place it would be bizarre if it wasn't also used in predator defence."

Other marks on the bones give additional clues to Brontomerus' lifestyle and environment. Co author Dr Matt Wedel, assistant professor of anatomy at Western University of Health Sciences, Pomona, Calif., explained: "The shoulder blade of Brontomerus has unusual bumps that probably mark the boundaries of muscle attachments, suggesting that Brontomerus had powerful forelimb muscles as well. It's possible that Brontomerus mcintoshi was more athletic than most other sauropods. It is well established that far from being swamp-bound hippo-like animals, sauropods preferred drier, upland areas; so perhaps Brontomerus lived in rough, hilly terrain and the powerful leg muscles were a sort of dinosaur four-wheel drive."

While Brontomerus' unusual hip structure and enormous thigh muscles place it on the list of most extreme dinosaurs, it is also a significant find for another reason. It is one more in a number of finds over the past 20 years that challenge the previously held idea that sauropods began to disappear in the Early Cretaceous period.

"Because sauropods were the most abundant dinosaurs found during the Jurassic period and the rarest during the Early Cretaceous, there's long been the perception that sauropods were successful in the Jurassic and were replaced by duckbills and horned dinosaurs in the Cretaceous," explained Dr  Wedel. "In the past 20 years, however, we are finding more sauropods from the Early Cretaceous period, and the picture is changing.  It now seems that sauropods may have been every bit as diverse as they were during the Jurassic, but much less abundant and so much less likely to be found."

Image: Reconstruction of Brontomerus mcintoshi in combat with a predator.  Credit: Francisco Gascó