UCL space scientists have brought Andromeda Galaxy, the most distant object visible to the naked eye, into focus with the highest-ever resolution ultraviolet image of this most famous external galaxy. 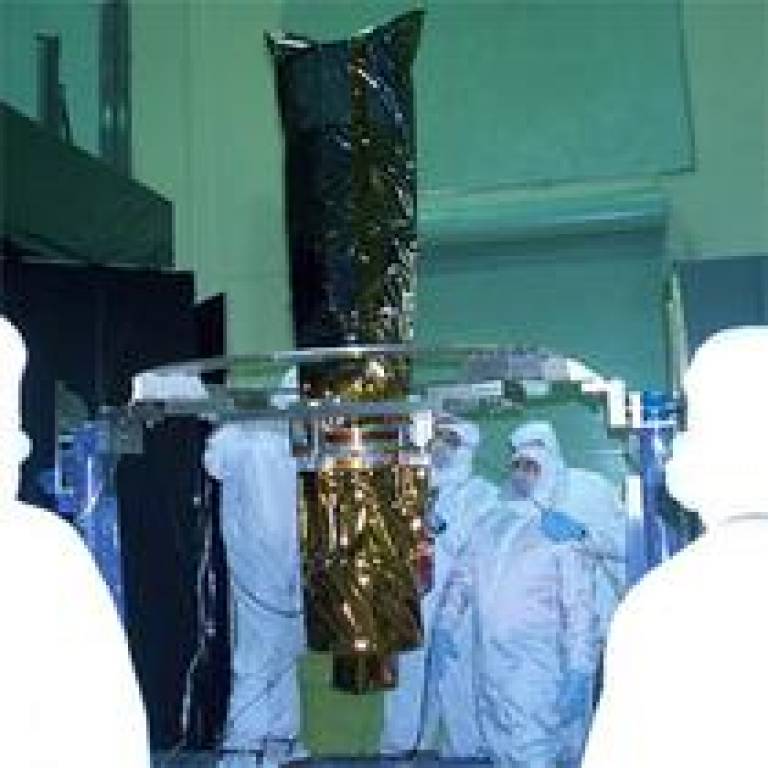 The image - the most detailed ever taken of Andromeda in the ultraviolet - was made up of a 330 individual images in three ultraviolet colours, showing approximately 20,000 sources. The ultraviolet picks out the spiral arms where hot young stars are being born.

Professor Mark Cropper, Head of the Astrophysics Group at UCL MSSL, explained: "The instrument, Swift-UVOT, which is on NASA's Swift spacecraft, was built largely at UCL MSSL, and is the twin of a similar instrument operating on the European Space Agency's XMM-Newton mission.

"The photograph to the right shows UVOT at Goddard Space Flight Center, just before being integrated with the Swift satellite. UVOT is a 30cm telescope, 2m long and weighing approximately 100kg.

Professor Alan Smith, Director of UCL MSSL, added: "We led the UK team and the instrument is a copy of a similar one still operating as part of the European Space Agency XMM-Newton Observatory.

"It really is a very spectacular image - the best ever in ultraviolet of this iconic galaxy, which is very similar to our own and a companion to our Milky Way. The ultraviolet light tends to show the hotter material and emphasises star formation regions and young stars."

Swift was launched on 20 November 2004 and has been operating successfully since then. UCL MSSL continues to be responsible for the provision of the UVOT data processing software and instrument maintenance.

Designed principally to study Gamma-Ray bursts (stellar explosions at extreme cosmological distances), Swift also has a number of parallel programmes, one of which is to study other galaxies in our 'Local Group' and beyond.

The Local Group is a gravitationally bound cluster of some 30 galaxies which include both the Milky Way and Andromeda. This image was taken as part of that programme.