MSc student Richard Dent describes how working on a Leonardo DiCaprio film about environmental damage has changed his approach to communicating climate change challenges through multimedia. 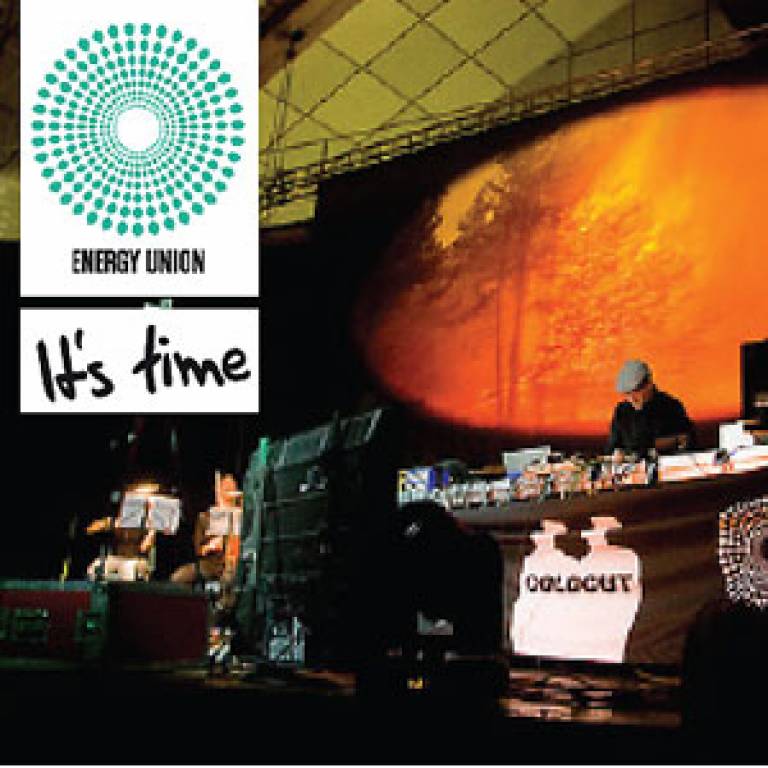 "Energy Union is a multimedia tour featuring Coldcut's culture-jam audiovisual show which tells the story of climate change and the power of renewable energy. Created  by a team based at Ninjatune Records, the show is currently touring festivals and  venues across Europe. Energy Union seeks to engage young people in personal and  political action on intelligent energy. I was the researcher, co-writer, producer and project manager of the film.

"When producing Energy Union we used hundreds of different sources of film, video, animation and original material to create an hour-long video montage, often re-appropriating mainstream material in the tradition of culture jamming. Coupled with an upbeat electronic soundtrack, the film moves at a fast pace through four acts: celebration, caution, solution and action. Coldcut have long been pioneers of sampling audiovisual material to create new art with an environmental message. The Energy Union film draws comparisons to Koyaanisqatsi and Baraka albeit with a contemporary soundtrack.

"I joined the project after finishing work on Leonardo DiCaprio's The 11th Hour. This was a feature-length documentary about the damage humans are doing to the environment and included an action campaign which I co-directed. But even with the celebrity power that DiCaprio wields, The 11th Hour failed to hit a large audience. Its overly apocalyptic tone or 'doom' framing, like the Spanner Film Age of Stupid, has since been discredited by some academics as an ineffective communication tool. My job was to make Energy Union different.

"We started by setting a limit on the negative material whilst using satire to communicate some of the more controversial material. Additionally, Energy Union  dares to be edgy; speaking to the 18-40 audience it's not afraid to push boundaries. Without a doubt, the focus of Energy Union is solutions. Crucial to the concept behind  the event is to create a positive association with renewable energy and to attempt to inspire rather than depress people into action. As passionate filmmakers working on climate change we need to be very careful how we frame this complex issue.

"Energy Union is, we hope, the next evolution of climate change communication and  we will continue to research and develop the concept to reach more people on this  controversial and critical issue."

A special preview of Energy Union and Project Genie will be screened at UCL's Cruciform Theatre 1 on 15 October from 6pm - 9pm. Follow the link at the top of this article for more information.