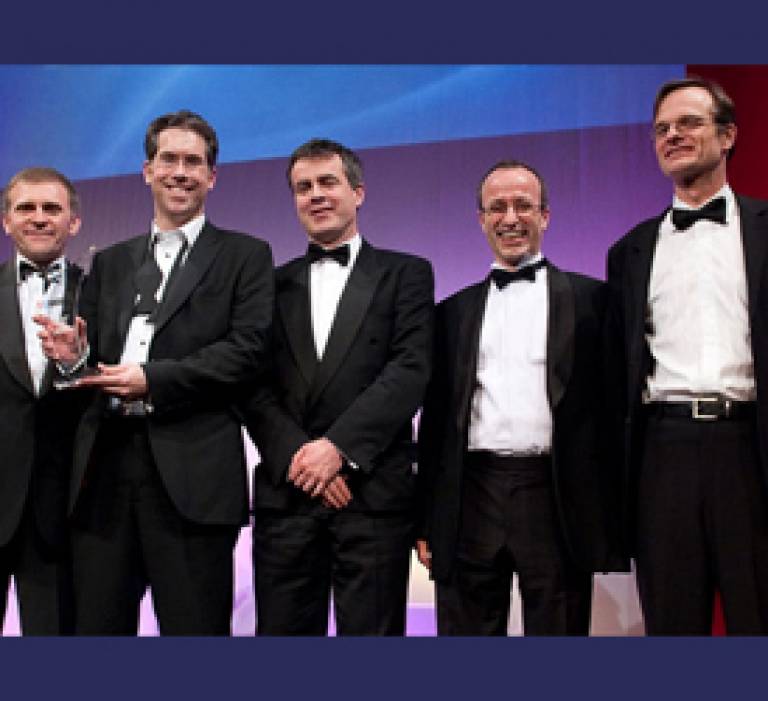 Research that proves the existence of atom-sized 'magnetic charges' that behave and interact just like electric charges has been awarded the prize for 'Research Project of the Year' at the 2010 Times Higher Education Awards.

The project, which was funded by the Engineering and Physical Sciences Research Council (EPSRC), discovered new magnetic properties of materials including a magnetic equivalent of electricity - a phenomenon dubbed 'magnetricity' by Professor Steve Bramwell, one of the team from the London Centre for Nanotechnology, which also included Dr Andrew Wills and Professors Gabriel Aeppli and Des McMorrow.

Magnetic poles usually occur in inseparable north-south pairs. Discrete, separable poles called monopoles have been postulated since 1894 but they hadn't been observed until the LCN team detected them in special crystals known as spin ice. These crystals are made up of pyramids of charged atoms, or ions, arranged in such a way that when cooled to exceptionally low temperatures, the materials show tiny, discrete packets of magnetic charge.

The team was able to use magnetic fields to make the monopoles flow in a similar way to electrons in an electric current. The current was detected by observing the behaviour of subatomic particles called muons created at the Science and Technology Facilities Council's Isis facility in Oxfordshire.

The THE judges drew attention to the practical importance of this new understanding of magnetic force, saying: "The team's imaginative exploration of the behaviour of subatomic particles crosses the disciplinary boundaries of chemistry and physics, and has the potential for wider application."

By engineering different spin ice materials to modify the ways monopoles move through them, the materials might in future be used in "magnetic memory" storage devices or in spintronics - a field which could boost future computing power.

"This is another example of where the EPSRC has funded award-winning, groundbreaking research. Nanoscience and nanoengineering not only push the boundaries of our fundamental knowledge, but can also support our economic growth whilst helping to solve some of society's greatest challenges."

Now in their 6th year, the Times Higher Education Awards represent a unique and high profile opportunity to celebrate the excellence and amazing achievements of UK higher education institutions, and reaffirm our commitment to the two core pursuits of higher education: teaching and research.

The London Centre for Nanotechnology is an interdisciplinary joint enterprise between UCL and Imperial College London. In bringing together world-class infrastructure and leading nanotechnology research activities, the Centre has the critical mass to compete with the best facilities worldwide. Research programmes are aligned to three key areas, namely Planet Care, Healthcare and Information Technology and exploit core competencies in the biomedical, physical and engineering sciences.

The National High Magnetic Field Laboratory develops and operates state-of-the-art, high-magnetic-field facilities that faculty and visiting scientists and engineers use for research. The laboratory is sponsored by the National Science Foundation and the state of Florida.

UCL Engineering: second most citations in Europe
Overlooked element could be part of dream team for quantum computing