Inside Nature: Henry Gee at the UCL Grant Museum of Zoology 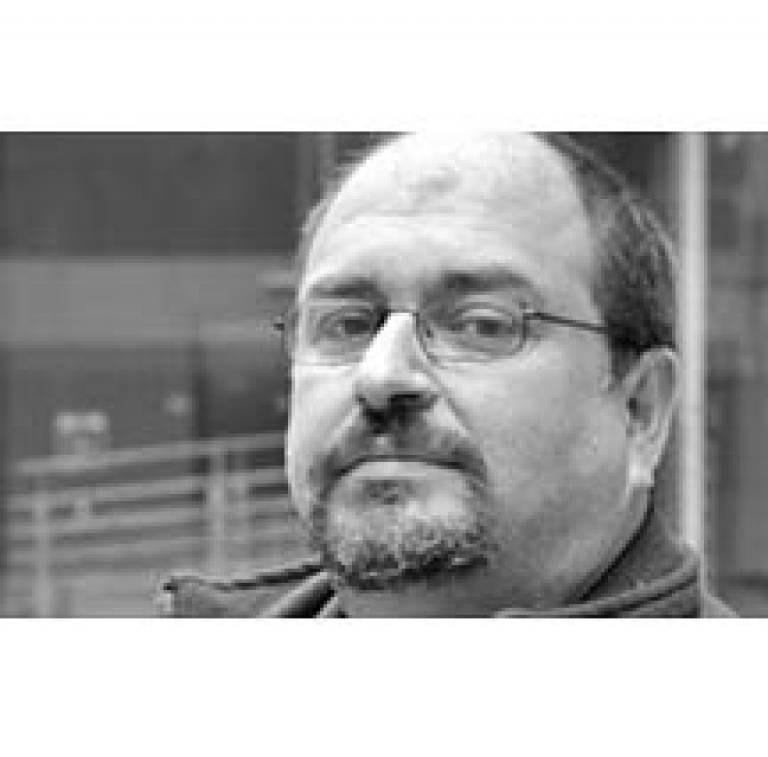 Jack Ashby, Learning and Access Manager at the UCL Grant Museum of Zoology, reflects on the working life of one of the gatekeepers of the world's scientific knowledge: Nature Senior Editor Henry Gee, who spoke at the museum on 26 October.

"Although by far the strongest emotion I experienced whilst programming and marketing Henry Gee's talk was excitement - in the fact that we had an engaging, funny and influential scientist visiting - I was also nervous that it could all go horribly wrong.

Dr Henry Gee is Senior Editor (Biological Sciences) for Nature. Along with the other Senior Editors, he is the guy who receives people's article submissions for one of the most distinguished journals in the world and decides whether to accept or reject them. As such he is a gatekeeper for what the world gets to hear about - an extremely powerful person.

According to Henry, who gave a talk at the Grant Museum of Zoology to give an insight to his work, Nature receives 200 manuscripts per week - that's 10,400 every year - but of these only ten a week get published. In other words, authors have a 95% failure rate at getting across Henry's desk. He freely admits that he ruins people's prospects of tenure. What I was nervous about was that people would want revenge.

Prior to the Grant Museum's public events I ask colleagues working in relevant disciplines to send on notices about the event to their departments. On this occasion I got several replies along the lines of 'Looks good, Jack - will you be providing the rotten tomatoes or should we bring our own?'

In the end the audience was gentle, and noone lambasted him for rejecting their papers. Henry was extremely candid about the process for accepting manuscripts, as well as his likening of the physics editors to Orcs (and he would know - one of his books is called The Science of Middle Earth) and biochemistry to bad cooking (you can't eat the results).

For me, the take-home messages were that editors can't read every word of every paper; they reject four out of five papers without taking any advice, and they have to accept what people tell them as the truth.

What journal editors do is rather impressive. Henry, like many before him, noted that scientists have a very deep knowledge of a very narrow area (he himself has a PhD in how to tell cow fossil bones from bison bones), whilst journalists have a very shallow knowledge of pretty much everything. This means they have to accept or reject a paper without knowing much about the field it's based in. After training as a palaeontologist, the first article he received when he started at Nature was about radiological protection techniques.

I guess some could be annoyed by the fact that someone who doesn't know the first thing about it rejected their paper, but actually I'm reassured. The rigour of the science isn't the only thing that matters. To be a good paper, at the end of reading it some significant finding has to stay with you. Papers only get in 'if they will change the world in some fundamental way'. That's quite a big ask - and explains why only five percent make it."

To find out more about the UCL Grant Museum and its events, follow the links at the top of this article.

The UCL Grant Museum of Zoology is the only remaining university zoological museum in London. It houses around 67,000 specimens, covering the whole animal kingdom. Founded in 1828 as a teaching collection, the museum is packed full of skeletons, mounted animals and specimens preserved in fluid. Many of the species are now endangered or extinct including the Tasmanian Tiger or Thylacine, the Quagga, and the Dodo.

The Grant Museum has selection of spectacular glass models made by the Blaschka family in the late 1800s. The museum also contains many of Robert Grant's original specimens as well as those of Thomas Henry Huxley. The Grant Museum's collection of Sir Victor Negus's bisected heads are both arresting and beautiful and are reminiscent of the work of the artist Damien Hirst.

Doctor in the newsroom