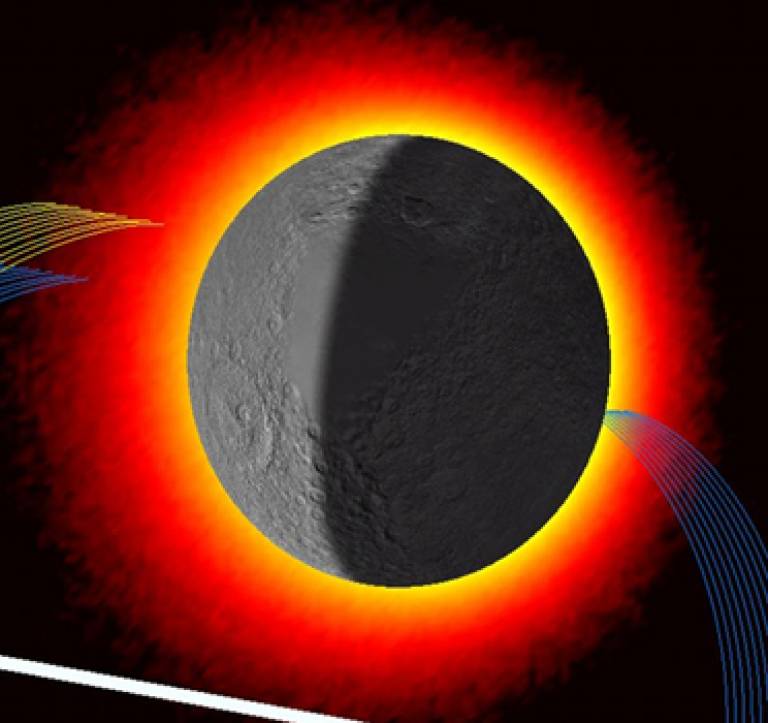 A fragile atmosphere infused with oxygen and carbon-dioxide has been discovered at Saturn's moon Rhea by the Cassini-Huygens mission - the first time a spacecraft has captured direct evidence of an oxygen atmosphere at a world other than Earth.

Published today in Science Express, results from the mission reveal that the atmosphere of Rhea, Saturn's second largest moon at 1500 km wide, is extremely thin and is sustained by high energy particles bombarding its icy surface and kicking up atoms, molecules and ions into the atmosphere.

The density of oxygen is probably about 5 trillion times less dense than in Earth's atmosphere. However, the formation of oxygen and carbon dioxide could possibly drive complex chemistry on the surfaces of many icy bodies in the universe.

"The new results suggest that active, complex chemistry involving oxygen may be quite common throughout the solar system and even our universe," said Dr Ben Teolis, a Cassini team scientist based at Southwest Research Institute in San Antonio and lead author. "Such chemistry could be a pre-requisite for life. All evidence from Cassini indicates Rhea is too cold and devoid of the liquid water necessary for life as we know it."

Dr Geraint Jones, from the UCL Mullard Space Science Laboratory and a co-author of the paper said: "The discovery of this tenuous atmosphere provides key information on how radiation can drive chemistry on icy surfaces throughout the universe."

UCL's Mullard Space Science Laboratory, supported by the Science and Technology Facilities Council, led the design and building of the electron spectrometer of the Cassini plasma spectrometer (CAPS), which detected negative ions streaming off Rhea's surface in 2005. Another part of CAPS detected positive ions on the opposite side of Rhea in 2005 and 2007. Completing the picture of Rhea's atmosphere, Cassini's ion and neutral mass spectrometer detected neutral particles when Cassini swept within 100 km of the moon's surface in March 2010.

Professor Andrew Coates, also from the UCL Mullard Space Science Laboratory and co-author of the paper, said: "Our instrument turns out to be a fabulous detector of negative ions as well as electrons. We've already found negative ions are important at Titan and Enceladus - and now, tracing back the trajectory of these ions really pinpoints the source of the atmosphere near Rhea's surface."

"Rhea's oxygen appears to come from water ice on Rhea's surface when Saturn's magnetic field rotates over the moon and showers it with energetic particles trapped in the magnetic field," said Professor Coates.

The carbon dioxide may be the result of "dry ice" trapped from the primordial solar nebula, similar to the case of comets, or it may be due to similar irradiation processes operating on the organic molecules trapped in the water ice of Rhea. The carbon dioxide could also come from carbon-rich materials deposited by tiny meteors that bombarded Rhea's surface.

The finding is consistent with earlier Cassini results that show Rhea to be a particularly dark-looking moon, sporting some carbon-based coating on its surface.