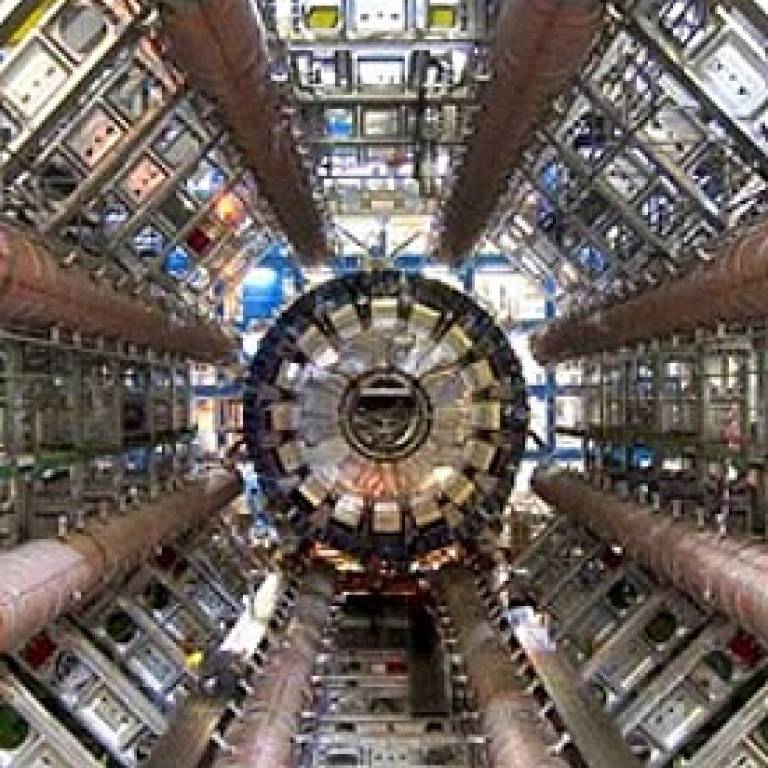 UCL's Professor John Butterworth, who led the UK development of one of the Large Hadron Collider (LHC) detectors, explains the significance of the record-breaking particle collisions achieved today.

Protons collided at seven trillion volts - the highest energies ever achieved by a man-made particle accelerator - at CERN (the European Organisation for Nuclear Research), which houses the LHC, near Geneva.

The breakthrough marks the start of a two-year campaign that could see scientists make new discoveries about the universe and answer some of the unresolved questions in physics.

The LHC aims to explore the nature of the universe moments after the Big Bang and to improve the understanding of how the universe was created, what it is made of and how it will evolve.

Professor John Womersley, particle physicist and Director of Science Programmes at Science & Technology Facilities Council, explained: "Over the coming months scientists will use data collected at these high energies first to cross-check data and theories from previous experiments, and then to search for particles and forces which we know must exist in the universe but which have never been observed. In the next couple of years this could lead to the discovery of a new law of physics called supersymmetry - which could explain the dark matter that seems to dominate our universe - and even to the discovery of the elusive Higgs Boson particle."

CERN will run the LHC at seven trillion electric volts for 18 months to two years to deliver enough data to the ATLAS (A Toroidal LHC Apparatus) and two other experiments to make significant advances across a wide range of physics areas.

Professor John Butterworth (UCL Physics & Astronomy) is Principal Investigator of the UK part of the ATLAS experiment, one of the detectors on the Large Hadron Collider. He said: "There is a whole new landscape of physics to explore at these energies. Somewhere in that landscape nature has hidden the way forces are unified and how particles get mass. Today the LHC gets us over the horizon and we start our exploration!"

With the amount of data expected, known as one inverse femtobarn to physicists, the combined analysis of ATLAS and CMS (one of the other detectors) will be able to explore a wide mass range, with the possibility of discovering the Higgs boson particle if it has a mass near 160 GeV (gigaelectron volts). The Higgs boson particle was proposed by British theoretical physicist Professor Peter Higgs as a solution to one of the most basic puzzles in particle physics - why some particles possess mass and others do not, such as the photon, the particle of light which is massless.

Image: Detail of the ATLAS calorimeter, which measures the energies of particles produced when protons collide in the centre of the detector

In this slideshow, Professor Butterworth explains stunning images of the LHC, the objectives of the research conducted there, and exactly why physicists want to bring protons into head-on collision at energies that no one has ever achieved before in 27 km of underground tunnel.