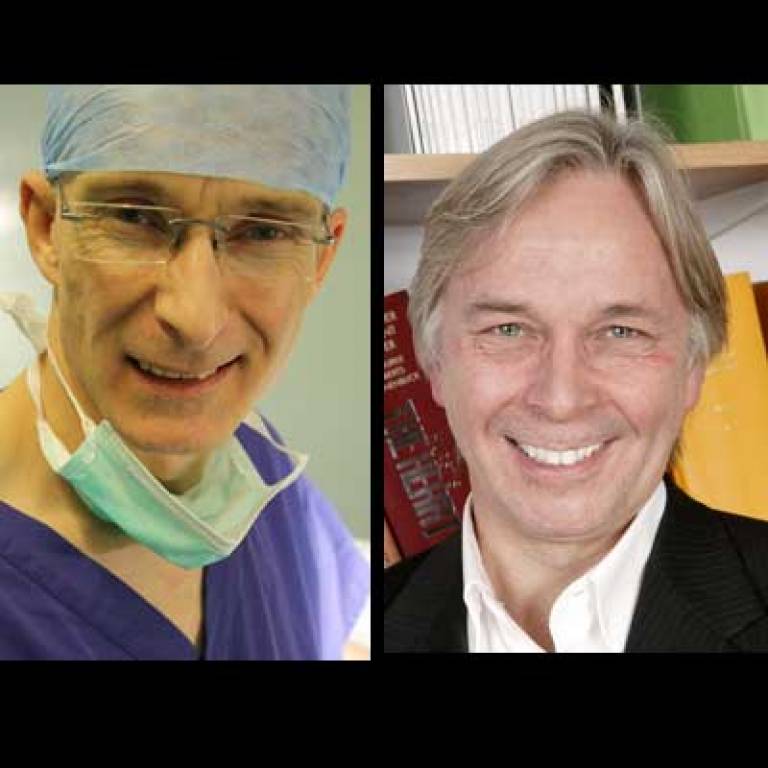 UCL scientists and surgeons have led a revolutionary operation to transplant a new trachea into a child and use the child's own stem cells to rebuild the airway in the body.

The operation - a world first - involved laboratory-based scientists and hospital-based clinicians working in partnership with colleagues in Europe to treat a 10-year-old British boy.

The boy, who has not been named, is recovering from surgery but his condition is stable and he is breathing unaided.

He was born with a rare condition called Long Segment Tracheal Stenosis - a tiny windpipe that does not grow and restricts breathing.

Shortly after birth, he underwent a conventional trachea transplant at Great Ormond Street Hospital for Children (GOSH), but his condition deteriorated last November when a metal stent implanted in that operation began to erode into the aorta, a key artery, causing severe bleeding.

Scientists and surgeons at UCL, GOSH, the Royal Free Hampstead NHS Trust, and the Careggi University Hospital in Florence, Italy, developed a new technique to treat the life-threatening condition.

They stripped cells from a donated trachea, used it to replace the entire length of the damaged airway, and then used the child's own bone marrow stem cells to seal the airway in the body.

Dr Mark Lowdell, Director of Cellular Therapy at Royal Free Hospital and a senior lecturer at UCL Medical School, received the donor trachea from Italy and some bone marrow from the patient at the beginning of surgery.

He and his colleagues prepared two different types of stem cells from the bone marrow together with some growth signalling chemicals and returned them to GOSH with the donor trachea.

Professor Paolo Macchiarini, from Careggi University Hospital, who is an Honorary Consultant at GOSH and Honorary Professor at UCL, applied the cells and the growth factors to the trachea in the operating theatre.

Martin Elliot, Professor of Cardiothoracic Surgery at UCL and Director of the Tracheal Service at GOSH, led the operation to repair the damaged aorta and implant the new trachea.

The application of this technology - which has never been used on a child before - should reduce greatly the risk of rejection of the new trachea, as the child's stem cells will not generate any immune response.

Professor Martin Birchall, UCL lead for translational regenerative medicine, who is also a head and neck surgeon specialising in airways and voice, led on ethics and regulatory approvals.

Since moving to a Chair at the UCL Ear Institute in 2009, Professor Birchall has developed a research programme with Professor Elliott which includes, for example, the absorbable stent (supporting tube) used in this 10-year-old patient.

When the patient presented to Professor Elliott, Professor Birchall pulled together the various team members into a functional unit capable of delivering a stem cell implant as quickly as possible.

He said: "Professor Macchiarini's seminal work, together with the UCL team, has now saved the life of two adults and one child. We have shown that stem cell-based treatments can save lives and can be used in the creation of living structures which draw upon the body's own natural healing mechanisms for their support.

"The step-wise progression in technique from first patient to the present has delivered a highly streamlined, rapid process. This means that such treatments potentially can be moved out of the hands of a tiny number of specialist centres into many hospitals around the world, including those in developing countries."

The UCL Institute for Child Health and the Great Ormond Street Hospital NHS Trust together form the largest centre for paediatric research outside the US and play a key role in training children's health specialists for the future.

The UCL Centre for Stem Cells and Regenerative Medicine brings together more than 150 research groups from several faculties, specialised hospitals and institutes across UCL - including the MRC National Institute for Medical Research (NIMR) - with a common interest in all aspects of stem cells, tissue engineering, repair and regeneration and the development of their therapeutic and biotechnological potential.