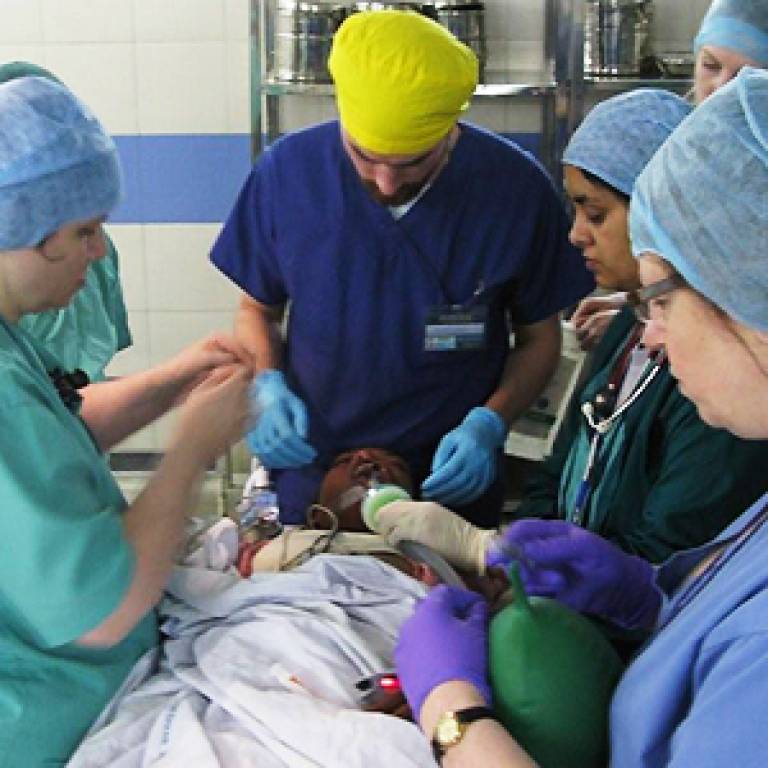 The Northern Cleft Foundation (NCF) is a non-profit humanitarian medical organisation that takes a small team of volunteers to India each year to operate on people with cleft lip and palate deformities free of charge. Interested in global health and the work done by the NCF, I quickly agreed when offered a place on their upcoming trip in January 2010.

The size of the team generally consists of around 30 people, including maxillofacial surgeons specialising in cleft repair; anaesthetists; theatre, recovery and anaesthetic nurses; and the odd medical student.

Everyone who comes along is expected to raise money to cover their own travel and accommodation expenses and pay for operations on five children: rental of local hospital space and equipment means that the price of one operation is approximately £100. And so after a few months of vigorous fundraising I found myself eagerly awaiting our departure date.

Flying via Mumbai, we landed at the single-terminal airport of Nagpur city, Maharashtra state, where the 2010 camp would be held. We discussed the plans for the camp over a quick dinner, and put together a rough schedule for the following day.

The next morning started with a quick look at the facilities we'd be using - two wards, three operating theatres, and a small four-bed recovery room - and then we began setting up for the day's operations. After a pre-op assessment of the patients by the surgeons and anaesthetists we were ready to get started. It would take three theatres running simultaneously for nine days to get through all the patients who had turned up for operations.

Fundamental to the NCF's work is their tight collaboration with local groups to ensure that when they come to India they are addressing a locally perceived need, and not just barging in and waving their scalpels around where they're not wanted.

We couldn't have achieved what we did this year without the cooperation and support of the Rotary Club of Nagpur West (RCNW), who worked hard to locate the patients and bring them to us. The RCNW's success in this respect was demonstrated by the vast distances patients and their families travelled to reach the camp, some journeying over 250km from the neighbouring state of Madhya Pradesh in order to reach us.

Education is also an important aspect of the work done by the NCF, and I accompanied the team's specialist cleft nurse as she lectured on cleft nutrition to social workers who worked locally in the community.

For me this highlighted the fact that the operations we were performing not only affect the children's lives sociologically - with improved appearance and speech helping them to stay in education - but also affect their general health: by restoring their ability to eat properly the physical fitness of the children will greatly improve, and thus they stand a much better chance of surviving the life-threatening diseases that affect those living in poverty.

Working in a hospital in India was an amazing experience. My role on the trip included helping to write up the theatre lists for the subsequent day's operations, photographing all the patients pre- and post-operatively, conducting an audit of post-operative pain, assisting the surgeons and anaesthetists, making the local staff laugh with my attempts at Hindi, and generally helping out wherever I could.

It was useful to come to grips with using basic equipment - ventilating a patient by hand for the duration of their operation - and with how to improvise with what you have in order to get the job done - using wooden spoons as tongue depressors and rolls of tape wrapped in bandage for surgical head supports.

The 2010 camp was the ninth year the NCF has gone out to operate, and was felt by all involved to be a resounding success. Our hard work even caught the attention of the press, and we were featured in an article in The Times of India. Veteran members of the team who had attended the previous camps agreed that this year we'd worked harder than ever before, performing 103 operations in nine days (and one latecomer on the tenth day!) and bringing the running total of free operations performed by the NCF since its inception to over 500. It was with a feeling of exhaustion coupled with elation at what we had achieved that we boarded our flights back home to the UK.

Every year the NCF takes along a handful of medical students and junior doctors who are interested in getting experience. I would particularly recommend the camp for those with an interest in anaesthetics and maxillofacial surgery. For more information, follow the link above.

Image 1: Andrew (in the yellow cap) assists anaesthetists and performs an intubation (placing a tube into the body)

Image 2: A child on whose cleft lip the NCF operated in 2009. From left: pre-op, post-op and one year on, when the lip has completely healed

This article was first published in Issue 5, Spring 2010 of Perspectives, the Medsin UCL global health magazine. Medsin UCL is the UCL branch of the Medsin student network, dedicated to taking action on key global health issues by raising awareness, inspiring effective advocacy, and facilitating shared learning and dialogue amongst students.