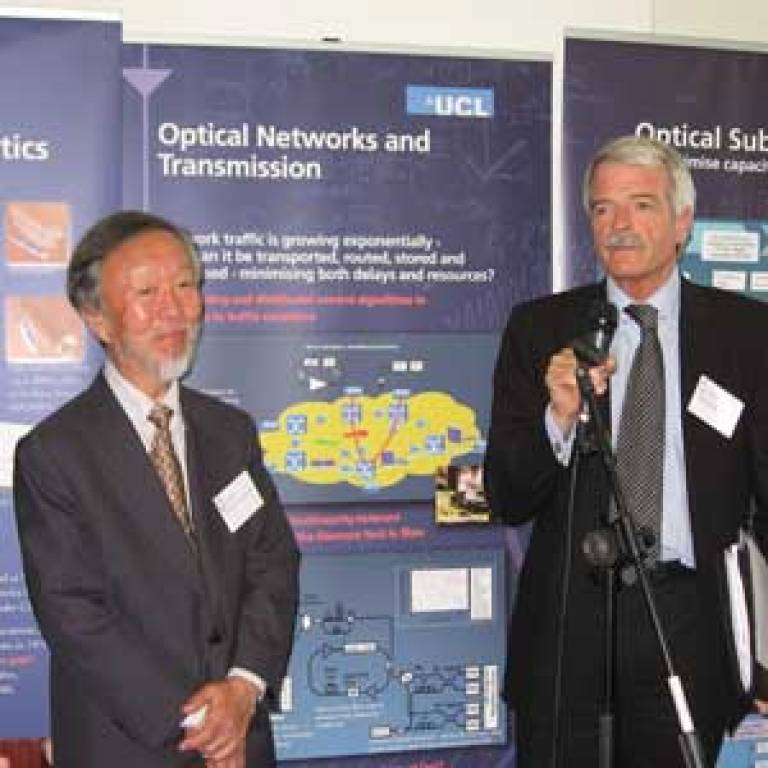 Professor Malcolm Grant, President and Provost of UCL, visited the Royal Academy of Engineering to celebrate the 50th anniversary of the first working laser and the award of the 2009 Nobel Prize for Physics to UCL alumnus Professor Charles Kao.

Professor Kao, who received an Honorary Doctorate from UCL last week, joined laser pioneer Professor Charles Townes and the Chinese ambassador Liu Xiaoming at the event, which was jointly sponsored by UCL, the Rank Prize Funds, the Royal Society, the Institution of Engineering and Technology, the Institute of Physics and the Royal Academy of Engineering.

Professor Kao, who completed a PhD through the University of London under the supervision of UCL's Professor Harold Barlow, was the first person to propose a practical optical fibre communication system, and helped lay the technological foundations of the internet.

The anniversary coincides with the department's bi-annual Mildner Lecture and the annual Research Poster day, which will take place on Friday 25 June 2010.

This year's lecture - 'Engineering, science and the economy'  - will be given by Lord Broers, a pioneer of nanotechnology who fabricated the first man-made devices with nanometre dimensions during his 19-year period at IBM, where he eventually held responsibility for the advanced development of IBM's microchips.

The lecture will examine the challenges facing engineers and scientists in the decades ahead to achieve what will be necessary to repair our economy.

The event is free but by invitation only. For further details please contact 125years@ee.ucl.ac.uk