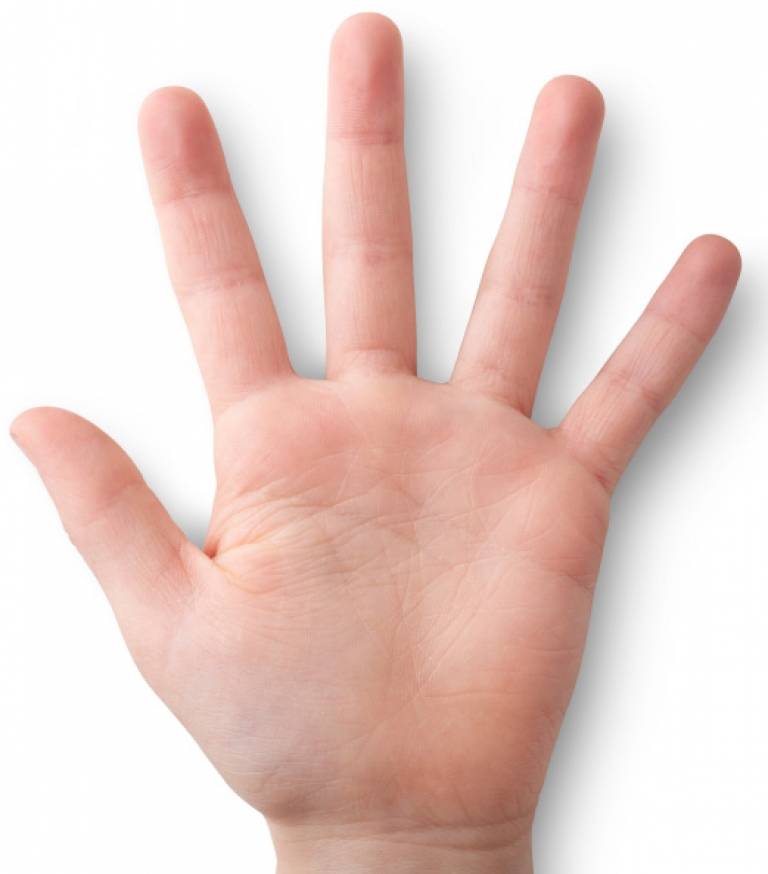 Our brains contain a highly distorted model of our own bodies, according to new research by scientists at UCL (University College London).

A study published today, which focused on the brain's representation of the hand, found that our model of our bodies is out of sync with reality - with a strong tendency to think that the hands are shorter and fatter than their true shape.

The results of the study, published in the journal Proceedings of the National Academy of Sciences, show that the brain maintains a model of the hand in which our fingers are perceived to be shorter and our hands fatter than they are. Neuroscientists suspect the reason for these distortions may lie in the way the brain receives information from different regions of the skin.

Dr Matthew Longo, lead author from the UCL Institute of Cognitive Neuroscience, said: "The phrase 'I know the town like the back of my hand' suggests that we have near-perfect knowledge of the size and position of our own body parts but these results show that this is far from being the case."

"Our results show dramatic distortions of hand shape, which were highly consistent across participants. The hand appears to be represented as wider than it actually is and the fingers as shorter than they actually are - a finding that might also apply to other parts of the body," added Dr Longo.

Participants in the study were asked to put their left hands palm down under a board and judge the location of the covered hand's knuckles and fingertips by pointing to where they perceived each of these landmarks to be. A camera situated above the experiment recorded where the participant pointed. By putting together the locations of all the landmarks, the researchers reconstructed the brain's model of the hand, and revealed its striking distortions.

The research, which was funded by the Biotechnology and Biological Science Research Council (BBSRC), aims to find out how the brain knows where all parts of the body are in space even when your eyes are closed - an ability known as 'position sense'.

Neuroscientists think that position sense requires two distinct kinds of information.  Signals that the brain receives from muscles and joints play an important role in position sense, but the brain also needs a model of the shape and size of each body part. For example, to know where the fingertip is in space, the brain needs to know the angles of joints in the arm and hand, but also the length of the arm, hand, and finger.

It is this model of our body's size and shape that is investigated in the study. "Of course, we know what our hand really looks like," said Dr Longo, "and our participants were very accurate in picking out a photo of their own hand from a set of photos with various distortions of hand shape. So there is clearly a conscious visual image of the body as well. But that visual image seems not to be used for position sense."

The results showed that in this task people estimated that their hands were about two-thirds wider and about one-third shorter than actual measurements.

Neuroscientists suspect that the brain's distorted model of body shape result is due to the way the brain represents different parts of the skin. For example, the size of the brain representation of the five fingers gets progressively smaller for each finger between the thumb and the little finger, mirroring the relative size of fingers in the body model reported in this study.

"These findings may well be relevant to psychiatric conditions involving body image such as anorexia nervosa, as there may be a general bias towards perceiving the body to be wider than it is. Our healthy participants had a basically accurate visual image of their own body, but the brain's model of the hand underlying position sense was highly distorted. This distorted perception could come to dominate in some people, leading to distortions of body image as well, such as in eating disorders," said Dr Longo.