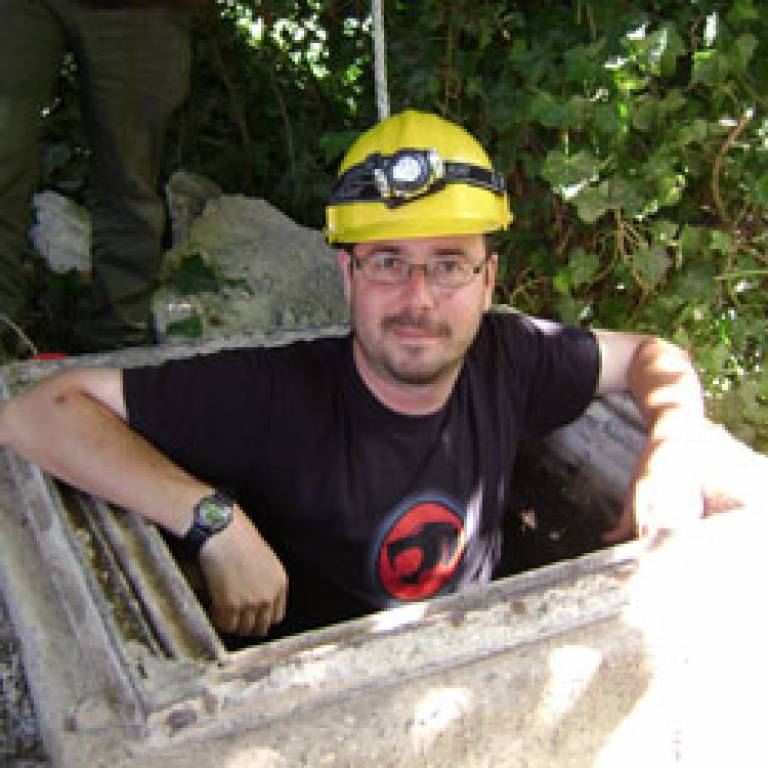 Dr Gabriel Moshenska (UCL Institute of Archaeology) is leading an excavation into a series of Second World War bombshelters that have remained hidden for more than 60 years.

The shelters, which were unearthed last week in Sunny Hill Park near Hendon, form part of a two-week project led by Dr Moshenska to explore the history of the site in north-west London.

Dr Moshenska said: "Most of the shelters have been demolished over the years, but these are pretty sturdy-looking things. People want to see that it is a shelter, although most people don't know  they are here."

"It has taken a while for the Second World War to be accepted as archaeology. People want to see the bits from the conflicts such as D-Day or the Battle of Britain and the stuff from the home front doesn't seem so sexy. Everything here will tie in with the RAF museum and give a real sense of the park as the centre for the community and a focus of that community for many years."

Based on his research, which has included months within the borough's archives to gather background information on the area, Dr Moshenska believes the shelters can be dated back to the period from mid-June 1939 to mid-March 1940.

He said Hendon Borough Council, as it was at the time, was given responsibility to find shelter space for about 17,000 in the area, and built a series of similar structures across eight parks.

The team made the shelters available for the community to learn from through an archaeologicial open day over the weekend and six-year-old local schoolboy David Wolffe has played a key part in the excavation by directing the team to a sign which he found when he was walking with his Mum.

Dr Gabriel Moshenska said: "It is very unlikely for this sort of thing to survive; it's the most fascinating find, which would have been used to direct people during a black-out."

The team has also managed to access two of the rooms, and found dozens of items including old electrics, chemical toilets, metal buckets and even bicycle parts.

Mr Moshenska said: "All the schools do the Second World War so it is amazing to have these here so people can come and see them. There are still some people who are old enough to remember and they are the last generation who can pass on their memories. It is great when people come back and start telling their story."

The two-week excavation is also linked to a trench dig which is taking place in the grounds of Church Farmhouse Museum, in Greyhound Hill where the sign will be displayed.

Archaeologists working on the site hope to find evidence of a possible Saxon trench. Hendon and District Archaeological Society chairman Don Cooper said: "We are looking at the origins of Hendon and it is moving forward quite well. It helps the build an understanding of the heritage of the area. What we find here helps create a sense of place and a sense of belonging.

"People seem to like to know about the background of their local area and some come along to remember their past."