Part of the brain that tracks limbs in space discovered 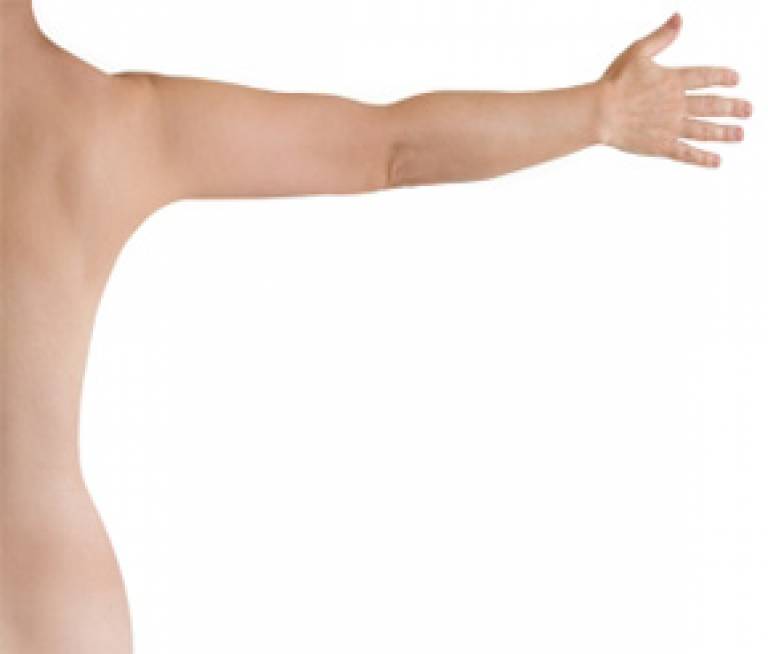 Scientists have discovered the part of the brain that tracks the position of our limbs as we move through space.

When a mosquito lands on your hand, you can rapidly and effortlessly make a movement of the other hand to brush it away, even in darkness. But performing this seemingly simple action involves a surprisingly complex coordination of different types of sensory information in order for your brain to construct a constantly updated 'map' of the body in space.

Now, scientists from UCL (University College London) and Barcelona (Pompeu Fabra University, ICREA and University of Barcelona) have identified an area of the human brain called the parietal cortex that constructs this body model from the combination of tactile information from your skin (for example, where the mosquito is on your hand) with "proprioceptive" information about the position of your hand relative to your body.

In an experiment they found that impairing the parietal cortex, using a brief pulse of magnetic stimulation, significantly impaired volunteers' judgements about the spatial relationship between their face and arms, but not their perception of touch or location alone. The research is published in the journal Current Biology, and was funded by the Biotechnology and Biological Sciences Research Council (BBSRC).

Professor Patrick Haggard, UCL Institute of Cognitive Neuroscience, who led the UCL team, said "Our brain constantly keeps track of the movements of the limbs, so that we always know the posture of our body, even with our eyes closed. Our results show, for the first time, how the brain updates this 'body space'.

"Our findings may be particularly relevant to children with developmental coordination disorder: these children have difficulty in coordinating their movements, but recent evidence suggests that one underlying problem is their poor sense of where their limbs are in space. Our result identifies the specific part of the parietal cortex needed to construct this map of body space."

Researchers then disrupted the activity of the posterior parietal cortex (PPC) in the right hemisphere of the brain by delivering a brief pulse of magnetic stimulation after the arm tap and before the face tap. The stimulation was delivered through a coil placed on the scalp just over the location of the posterior parietal cortex indicated on a brain scan taken of each participant.

The stimulation significantly impaired volunteers' judgements about the spatial relation between the arm tap and the face tap. Crucially, when the volunteers just judged arm position alone, or touch location alone, the same stimulation had no effect. The scientists concluded that the posterior parietal cortex is the key brain area that combines touch and limb position, to produce a map of where the tap is in egocentric space.