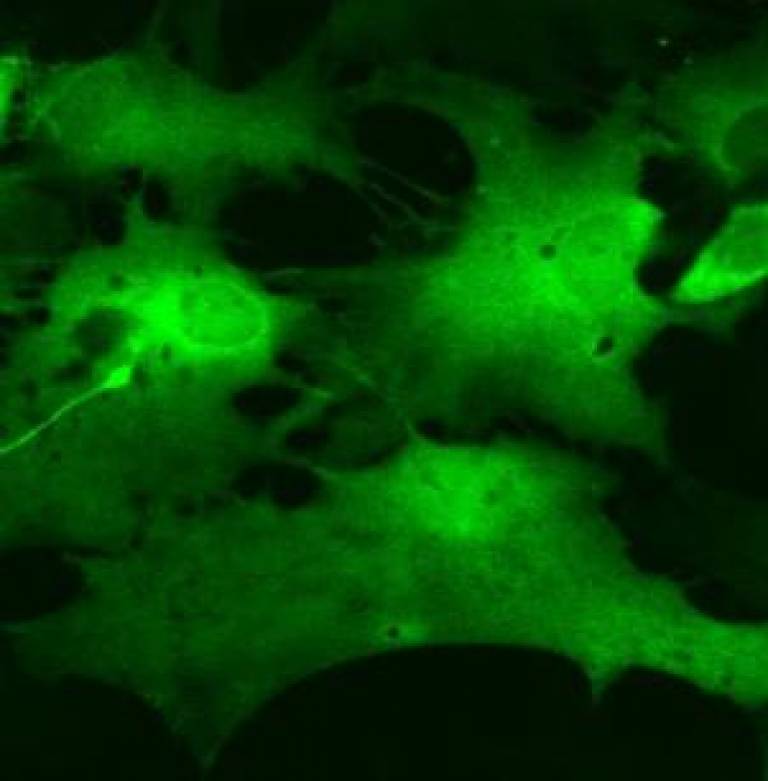 Astrocytes - brain cells named after their characteristic star-shape and previously thought to act only as the 'glue' between neurons, have a central role in the regulation of breathing, according to scientists.

The finding provides a new dimension for research into fundamental principles of brain organization and function and may be relevant for understanding causes of devastating conditions associated with respiratory failure such as Sudden Infant Death Syndrome.

The research, funded by the Wellcome Trust and published today in Science Express, was carried out by scientists at UCL and the University of Bristol. They demonstrate that brain astrocytes are able to sense the levels of carbon dioxide in the blood. They then activate brain neuronal respiratory networks to increase our breathing in accord with prevailing metabolism and activity.

Astrocytes are a subtype of a group of brain cells known as glia (which means 'glue' in Greek). Glial cells are the most abundant cells in the human brain - outnumbering neurons by a factor of ten to one. Until very recently, glial cells have been thought to be the less exciting sisters of neurones, merely providing them with structural and nutritional support.

Now, astrocytes have been found to have a unique ability to "taste" the composition of arterial blood entering the brain by sensing increases in arterial levels of carbon dioxide. When activated they release a chemical messenger called ATP which stimulates brain respiratory centres to increase our breathing in order for extra carbon dioxide to be removed from the blood and exhaled.

This observation places astrocytes at the centre of a fundamental regulatory reflex which subconsciously continually adjusts our breathing according to ever changing metabolic and behavioural needs.

Dr Alexander Gourine, a Wellcome Trust Senior Research Fellow in the UCL Department of Neuroscience, Physiology and Pharmacology, who led the study, said: "This research identifies brain astrocytes as previously unrecognized crucial elements of the brain circuits controlling fundamental bodily functions vital for life, such as breathing, and indicates that they are indeed the real stars of the brain.

"This basic science information has to be used rapidly in order to determine whether glial dysfunction contributes to serious disorders of central control of breathing underlying Sudden Infant Death Syndrome and/or congenital central hypoventilation syndrome (Ondine's curse). If this hypothesis is correct astrocytes may be considered as potential targets for therapy in preventing respiratory failure".

The research was carried out in rats using revolutionary gene transfer techniques that allow scientists to observe and control the activity of astrocytes in living brains using light.

A butterfly effect in the brain