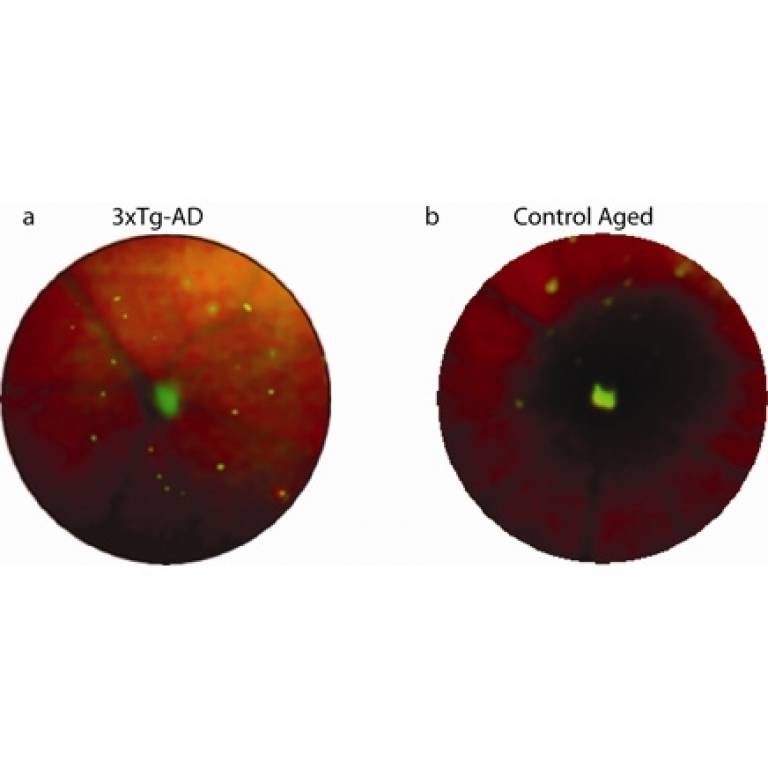 A simple and inexpensive eye test could aid detection and diagnosis of major neurological diseases such as Alzheimer's at an earlier stage than is currently possible, according to new research by UCL scientists.

The research, led by Professors Francesca Cordeiro and Stephen Moss, published today in Cell Death & Disease, demonstrates a new technique that enables retinal, and therefore brain cell death, to be directly measured in real time. The method, demonstrated in an animal model, could not only refine diagnosis of neurodegenerative disorders and help track disease progress; it could also aid the assessment and development of new treatments.

The technique uses fluorescent markers that attach themselves to the relevant cells and indicate the stage of cell death. The retina is then observed using a customised laser ophthalmoscope. Until now, this kind of technique has only been used in cells in the lab, rather than in live animals. This research is therefore the first ever in vivo demonstration of retinal nerve cell death in Alzheimer's Disease.

Professor Cordeiro, UCL Institute of Ophthalmology, said: "The death of nerve cells is the key event in all neurodegenerative disorders - but until now it has not been possible to study cell death in real time. This technique means we should be able to directly observe retinal nerve cell death in patients, which has a number of advantages in terms of effective diagnosis. This could be critically important since identification of the early stages could lead to successful reversal of the disease progression with treatment.

"Currently, the biggest obstacle to research into new treatments for neurodegenerative diseases is the lack of a technique where the brain's response to new treatments can be directly assessed - this technique could potentially help overcome that."

Although this paper outlines the technique in animal models (rats and mice), Professor Cordeiro's team are further along with work using the same technique to detect and assess glaucoma, and will be conducting their first patient trials later this year.

She added: "The equipment used for this research was customised to suit animal models but is essentially the same as is used in hospitals and clinics worldwide. It is also inexpensive and non-invasive, which makes us fairly confident that we can progress quickly to its use in patients.

"Few people realise that the retina is a direct, albeit thin, extension of the brain. It is entirely possible that in the future a visit to a high-street optician to check on your eyesight will also be a check on the state of your brain."

The research was supported by funding from The Wellcome Trust and The Foundation Fighting Blindness.

The project has also been supported by UCL Business proof of concept funds and two patents have been filed around this technology.

Image: Retinal images of a living 14-month Alzheimer Triple Transgenic mouse (a) compared to an aged control living mouse (b). Many more retinal nerve cells are in the early phase of apoptosis (green spots) in the Alzheimer mouse.

The UCL Institute of Ophthalmology together with Moorfields Eye Hospital, is one of the leading centres for eye research. The Institute is committed to a multi-disciplinary research portfolio that furthers an understanding of the eye and visual system linked with clinical investigations targeted to specific problems in the prevention and treatment of eye disease. A number of important eye research projects are in progress at the Institute, including The London Project to cure AMD, led by Professor Pete Coffey, which is working to develop a stem-cell based therapy to restore vision in patients with AMD.

UCL Business PLC (UCLB) is responsible for commercialising research across all disciplines generated from within UCL and associated organisations. It is primarily responsible for protecting inventions and transacting commercial activity including options, licences and collaborative commercial research. UCLB also has responsibility for creating and spinning-out companies from UCL. UCLB is wholly-owned by UCL and operates as an independent company with its own Board of Directors.

UCL wins half of new Fight for Sight research grants