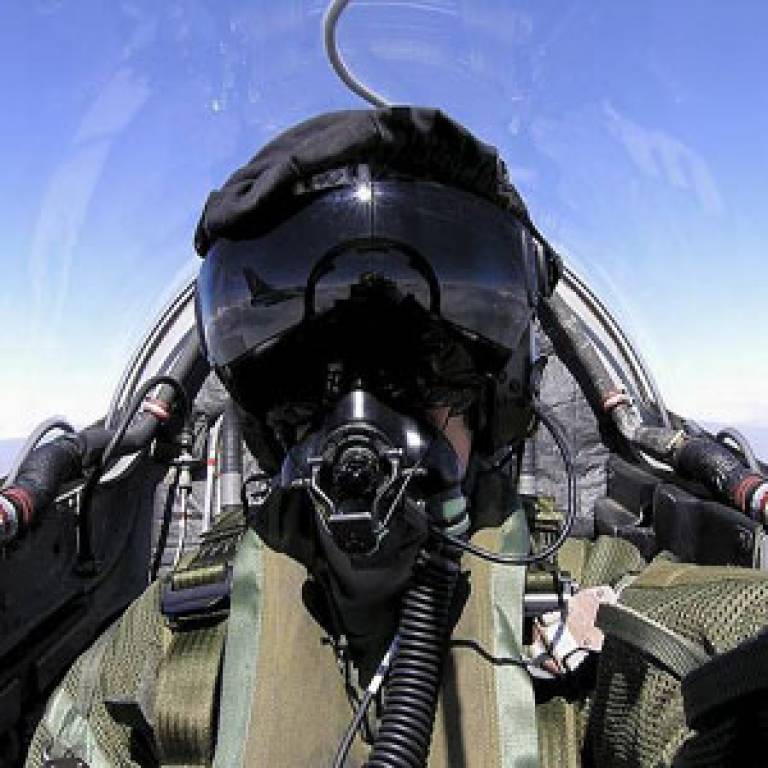 Cognitive tests and MRI scans have shown significant differences in the brains of fighter pilots when compared to a control group, according to a new study led by scientists from UCL.

The study, published today in the Journal of Neuroscience, compares the cognitive performance of 11 front-line RAF (Royal Air Force) Tornado fighter pilots to a control group of a similar IQ with no previous experience of piloting aircraft. All the participants completed two 'cognitive control' tasks which were used to investigate rapid decision making. Diffusion tensor imaging (DTI), a type of MRI brain scan, was then used to examine the structure of white matter connections between brain regions associated with cognitive control.

The researchers found that fighter pilots have superior cognitive control, showing significantly greater accuracy on one of the cognitive tasks, despite being more sensitive to irrelevant, distracting information. The MRI scans revealed differences between pilots and controls in the microstructure of white matter in the right hemisphere of the brain.

Senior author Professor Masud Husain, UCL Institute of Neurology and UCL Institute of Cognitive Neuroscience, said: "We were interested in the pilots because they're often operating at the limits of human cognitive capability - they are an expert group making precision choices at high speed.

"Our findings show that optimal cognitive control may surprisingly be mediated by enhanced responses to both relevant and irrelevant stimuli, and that such control is accompanied by structural alterations in the brain. This has implications beyond simple distinctions between fighter pilots and the rest of us because it suggests expertise in certain aspects of cognition are associated with changes in the connections between brain areas. So, it's not just that the relevant areas of the brain are larger - but that the connections between key areas are different. Whether people are born with these differences or develop them is currently not known."

The study tasks were designed to assess the influence of distracting information and the ability to update a response plan in the presence of conflicting visual information. In the first task, participants had to press a right or left arrow key in response to the direction of an arrow on a screen in front of them, which was flanked by other distracting arrows pointing in different directions. In the second task, they had to respond as quickly as possible to a 'go' signal, unless they were instructed to change their plan before they had even made a response.

The results of the first task showed that the expert pilots were more accurate than age-matched volunteers, with no significant difference in reaction time - so, the pilots were able to perform the task at the same speed but with significantly higher accuracy. In the second task, there was no significant difference between the pilots and volunteers, which the authors say suggests that expertise in cognitive control may be highly specialised, highly particular to specific tasks and not simply associated with overall enhanced performance.

These findings suggest that in humans some types of expert cognitive control may be mediated by enhanced response gain to both relevant and irrelevant stimuli, and is accompanied by structural alterations in the white matter of the brain.

The research was supported by funding from the Wellcome Trust, the Medical Research Council and the NIHR Specialist Biomedical Centre at UCL/UCLH.