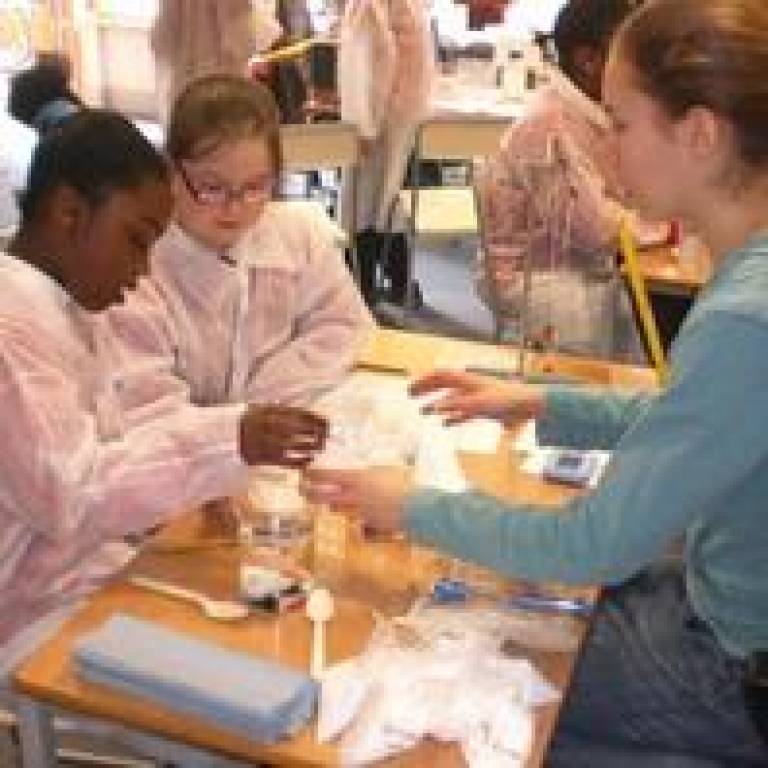 "Through a unique arrangement the Worshipful Company of Pewterers, a City of London Livery company, funds a fellowship at the UCL Insitute of Neurology.

I am the eleventh 'Pewterers' Fellow', and although the salary of a research fellow is not luxurious, it is still the largest charitable donation made by the Worshipful Company, so I decided early in my tenure as the Pewterers' Fellow to try to give the Company something back.

St Jude and St Paul's CofE primary school in Dalston is another charitable effort of the Company (as with most Livery companies in London, the Pewterers are primarily a charity these days). Three years ago working with the Livery member Lyn Williams, I arranged a day of scientific inquiry for the nine- and ten year-olds in year five.

I had three goals: first, to have the children try out the scientific method; second, to give the children a chance to meet a 'real scientist' and to suggest that it is a viable future career; and finally, to make a token acknowledgment to the Worshipful Company of Pewterers for stepping in at what is often a bottleneck in research careers.

Last month I took part in the third year of 'Livery Science Day: Is it right or wrong? An introduction to the hypothesis'. The day now involves 60 children from two schools, nine UCL graduate students from all walks of science and engineering, one Pewterers' Fellow and a science demonstration expert from the USA (a.k.a. my father, an engineer and long-time teacher of after-school science clubs).

Every one of the 60 children had an opportunity to conduct an experiment that tested a simple hypothesis: that the speed of a pendulum is set by the length of the string (it is); that a simple launcher will send a heavy ball further than a light ball (it won't, and if you are lucky, only the light ball hits the headteacher); that antacids can neutralise more vinegar than plain water (they can, and make lots of pretty colours if you use Universal Indicator); and seven other experiments all designed to make noise, colour and the occasional stink.

The children designed posters to report on whether their experiments supported the hypothesis they were given (the ones proving hypotheses wrong were generally keen to tell us so). At the end of the day, all of the scientists and engineers lined up in front of the classroom, and the children got to ask us all manner of questions, from 'Have you been on the moon?' to 'How long do you have to go to school to be a scientist?'

On Friday, while we were lined up in front of the year five children in Edith Neville School, a stone's throw from Euston and in the poorest catchment area in London, a boy raised his hand and asked: 'What makes gravity work?'

Without missing a beat, one of the graduate students in UCL Mechanical Engineering replied: 'Nobody knows. That is why we need people like you to become scientists.' "

Images: Schoolchildren get to grips with scientific methods during Livery Science Day at St Jude and St Paul's CofE primary school in Dalston

Sylvia Jones, Principal of UCL Academy: "Everyone will be a learner"