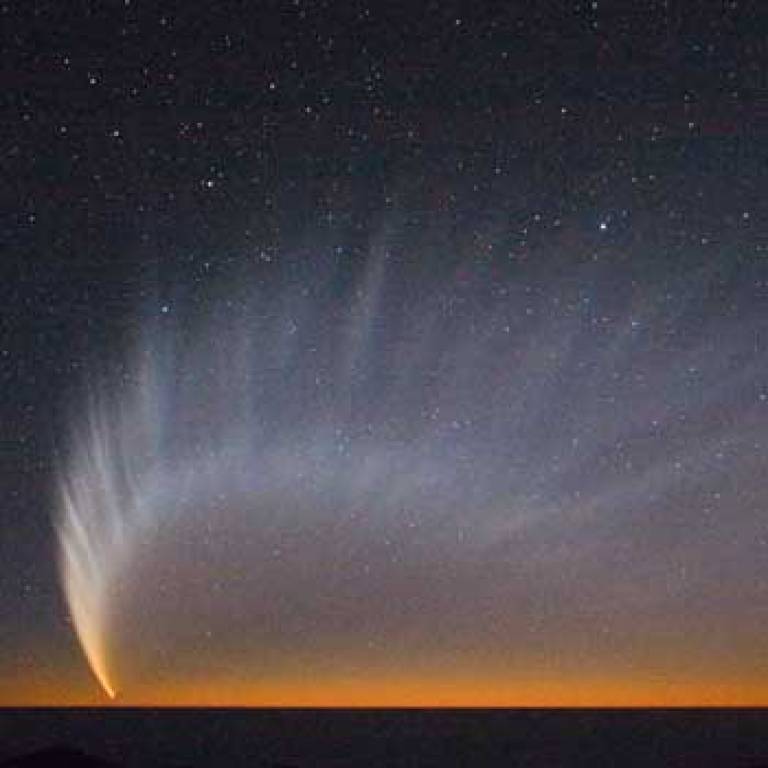 Scientists from UCL's Mullard Space Science Laboratory (MSSL) have identified a heavyweight contender for the crown of biggest comet on record.

Dr Geraint Jones and his colleagues used data from the ESA/NASA Ulysses spacecraft to gauge the size of the region of space disturbed by the Comet McNaught.

Analysis of magnetometer data shows evidence of a decayed shockwave surrounding the comet which was created when ionised gas emitted from the comet's nucleus joined the fast-flowing particles of the solar wind, causing the wind to slow down abruptly.

In January and February 2007, Comet McNaught became the brightest comet visible from Earth for 40 years. Ulysses made an unexpected crossing of Comet McNaught's tail during this time, one of three unplanned encounters with comet tails during the 19-year mission. The other encounters included Comet Hyakutake in 1996, the current record-holder for the comet with the longest measured tail.

Ulysses encountered Comet McNaught's tail of ionised gas at a distance downstream of the comet's nucleus more than 1.5 times the distance between the Earth and the Sun. This is far beyond the spectacular dust tail that was visible from Earth in 2007.

Dr Jones, who presented his findings to Royal Astronomical Society's National Astronomy Meeting in Glasgow on Tuesday 13 April, said: "It was very difficult to observe Comet McNaught's plasma tail remotely in comparison with the bright dust tail, so we can't really estimate how long it might be.

A comparison with crossing times for other comet encounters demonstrates the huge scale of Comet McNaught. The Giotto spacecraft's encounter with Comet Grigg-Skjellerup in 1992 took less than an hour from one shock crossing to another; to cross the shocked region at Comet Halley took several hours.

"The scale of an active comet depends on the level of outgassing rather than the size of the nucleus," Dr Jones added. "Comet nuclei aren't necessarily active over their entire surfaces; what we can say is that McNaught's level of gas production was clearly much higher than that of Hyakutake."

For more information about MSSL or Ulysses follow the links above.

Ulysses, a joint ESA-NASA deep-space mission, was designed to study the heliosphere - the region of space influenced by the Sun and its magnetic field. The primary scientific goal was to make the first ever measurements of the unexplored region of space above the Sun's poles.

Related stories:
The secrets of Saturn's moons
Blast off for UCL-led satellite mission