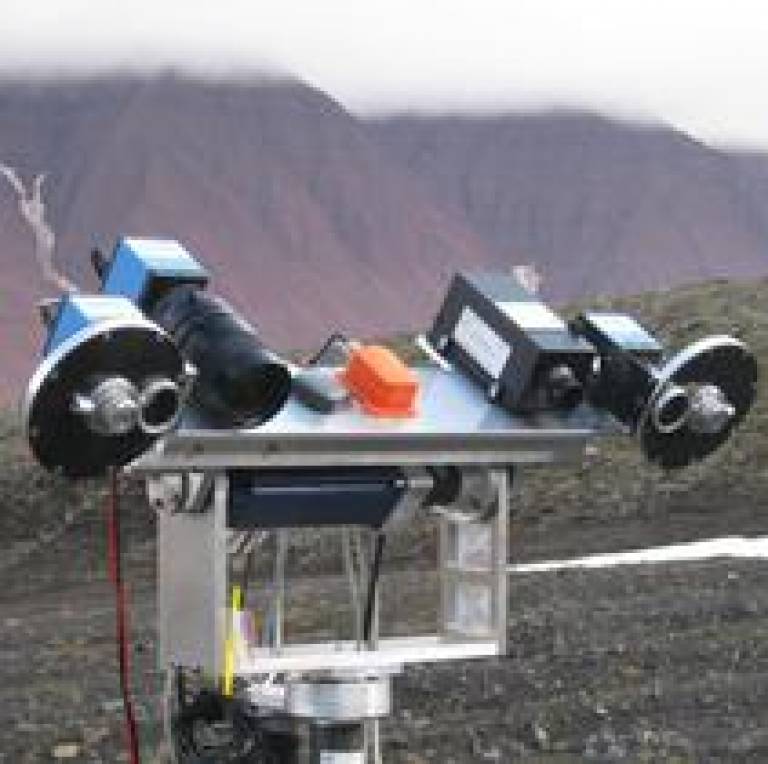 
An astrobiologist from UCL has taken part in an expedition to identify environments similar to Mars and test instruments bound for the Red Planet.

The Arctic Mars Analog Svalbard Expedition (AMASE) took place over three weeks in August and involved a team of 40 scientists, engineers and ship crew on board the R/V Lance.

The aim of the expedition was to provide planetary scientists with an environment as similar as possible to Mars in which to test instrumentation and conduct astrobiology research.

The expedition sailed to several locations around the north coast of Svalbard, where teams deployed their instruments, took samples and conducted fieldwork.

Ms Cousins (UCL Earth Sciences) was part of the three-strong PanCam team. The PanCam instrument is currently planned to be an integral part of the ESA ExoMars rover - a flagship mission that aims to uncover evidence of past or present life on Mars.

The PanCam instrument is essentially the 'eyes' of the rover, and provides colour 3D images, high resolution images, and can also produce a graphical representation of the colour of objects within the field of view. This data is then used to decide where to send the rover and which rocks to study.

The PanCam instrument is being developed by several teams across Europe, including one at UCL's Mullard Space Science Laboratory led by Professor Andrew Coates (UCL Space and Climate Physics).

Ms Cousins said: "Our objective was to test a mock-up of this instrument in terms of the quality of the data obtained, and the scientific interpretation of this data.

"Such testing is essential for being suitably prepared for when the mission lands and sends us back data - we want to be able to interpret what we're seeing (e.g. in terms of what minerals and rock types are present, and therefore what the environment that deposited those rocks and minerals was like in the past).

"During the expedition, a key focus was assessing the habitability of various environments, and we used the PanCam along with the other ExoMars instruments to identify how ExoMars might identify suitable sites on Mars to look for evidence of life."

Professor Coates said: "It's thrilling that we at UCL lead the international team (from Germany, Switzerland, Austria and the USA as well as the UK) producing the 'eyes' of the ExoMars rover.

"PanCam is one of the key instruments, providing the context for all the other rover measurements including the drill and life-detection experiments. The instrument is a powerful combination of stereo wide-angle cameras with a 'zoom' high resolution camera.

"As well as producing vital 3D models of the Martian terrain around the rover, PanCam has important scientific objectives in geology and atmospheric science. We can't wait until 2018 when PanCam will be on its way to Mars."

ExoMars is the first mission in ESA's Aurora Programme, which has been established to support the future exploration of the Solar System via robotic and human means.

MSSL is the UK's largest university-based space science research group and delivers a cutting-edge science programme, underpinned by a capability in space science instrumentation, systems engineering and project management. It has worked with all major space agencies around the world.