Press Release An archaeological team have come one step closer to unravelling the mystery of how the famous statues dotting the landscape of a tiny Pacific island acquired their distinctive red hats. 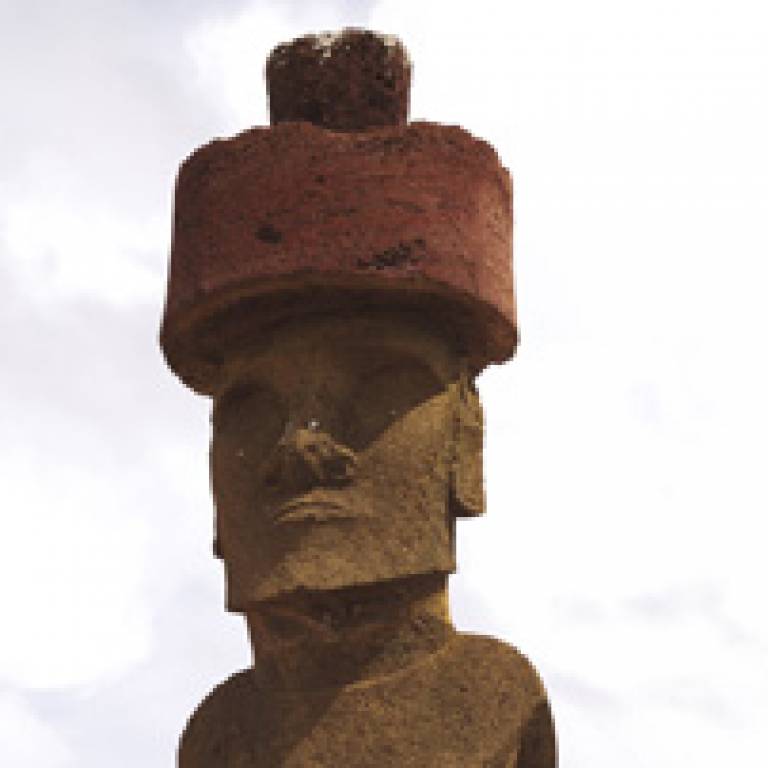 Dr Sue Hamilton from UCL and Dr Colin Richards from the University of Manchester are the first archaeologists ever to have excavated Easter Island's statue hat quarry, known to the locals as 'Puna Pau'.

Around 2,500 miles off the coast of Chile, Easter Island is the world's most remote place inhabited by people. The team are the first British archaeologists to work on the island since 1914 and their discovery of a road and a ceremonial axe has thrown new light on the mystery of the statues.

"We now know that the hats were rolled along the road made from a cement of compressed red scoria dust with a raised pavement along one side," says Dr Richards. "It is likely that they were moved by hand, but tree logs could also have been used."

Dr Hamilton adds: "The hat quarry is inside the crater of an ancient volcano and on its outer lip - a third of the crater has been quarried away by hat production.

"So far we have located more than 70 hats at the ceremonial platforms and in transit. Many more may have been broken up and incorporated into the platforms.

"The mint condition of the obsidian adze - a seven inch long axe-like tool used for squaring up logs or hollowing out timber, perhaps in canoe construction - suggests that it was not a quarry tool, but an offering left by a worker."

The team examined the way the hats, each weighing several tons and made of red scoria, a volcanic, rock-like pumice, were moved by Polynesians between 500 and 750 years ago.

They were placed on the heads of carved stone human figures known as moai which stand on ceremonial platforms encircling the island's coastline. The way the hats were raised and attached is unknown.

The team suggests that the presence of the adze and the way the road is lined with hats along one side shows that the road was a ceremonial avenue leading to the quarry itself.

Dr Richards says: "It is clear that the quarry had a sacred context as well as an industrial one.

"The Polynesians saw the landscape as a living thing and after they carved the rock, the spirits entered the statues.

"Initially, the Polynesians built the moai out of various types of local stone including the Puna Pau scoria, but between 1200 to 1300 AD Puna Pau switched from producing statues to hats.

"The change correlated with an increase in the overall size of the statues across the island."

Because of this long period of use, the team's investigations at Puna Pau provide evidence for the earliest monumentality in the Eastern Pacific.

Dr Hamilton says: "The quarry is in a secret place which is invisible from other parts of the island and the noise of production would have been contained by the crater.

"These people lived in a successful and well-organised society - the Easter Island of 500 years ago was a managed, living environment.

"70 per cent of the island was transformed into open gardens and agriculture using a sophisticated stone mulching system to conserve moisture - we are mapping these plantation areas as part of our landscape survey."

"The presence of discrete quarry bays at Rano Raraku statue quarry meant that different - and possibly competing groups were likely to have their own areas of production in Puna Pau too," Dr Richards explains.

Dr Hamilton and Dr Richards are joint directors of the 'Rapa Nui (Easter Island) Landscapes of Construction Project'. They will be working on the Island over the next five years.