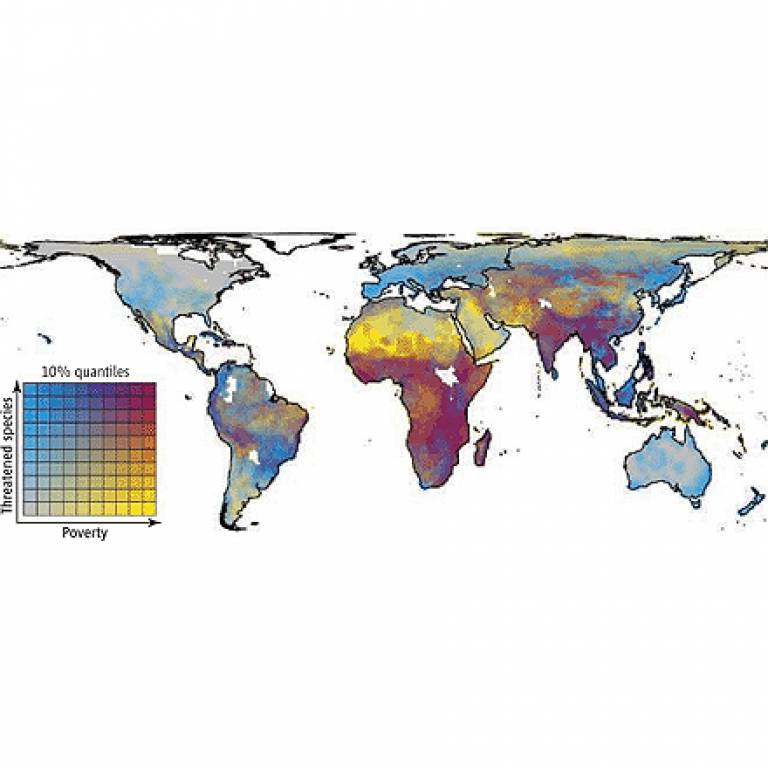 Goals set to alleviate extreme poverty will not be met unless we address the accelerating rate of biodiversity loss, warn UCL scientists in a paper published in the latest issue of Science.

Professor James Mallet and Professor Sandra Knapp - the co-directors of UCL's Centre for Ecology and Evolution - have joined with scientists from the Zoological Society of London and other eminent biodiversity scientists and policy makers led by Professor Jeffrey Sachs of Columbia University to draw the world's attention to the fact that development problems will not be solved if policy makers continue to ignore the environment.

The scientists write that the Millennium Development Goals (MDGs) aim to halve extreme poverty by 2015, but that these ambitions are being compromised by our inability to live sustainably.

The authors call for more research into the complex links between biodiversity and poverty, so that informed decisions can be made about environmental services, such as land use, to the benefit of both poverty alleviation and conservation.

As the world spectacularly fails to meet the targets set by the Convention on Biological Diversity to reduce biodiversity loss in 2010, the authors highlight the urgent need to set new achievable targets within the remaining MDG period.

Professor Mallet said: "Loss of biodiversity is bound to make people poorer in the long run. This policy forum document, supported and underwritten by a large number of British conservationists and biodiversity specialists, argues that we need more integrated thinking both in poverty alleviation and in biodiversity conservation.

"We have signed up to the Millennium Development Goals (MDG), which aim to halve extreme poverty by 2015. We are also committed, via, the Convention on Biological Diversity (CBD), to achieve by 2010 a significant reduction in biodiversity loss. Therefore, we need to find means of poverty reduction which at the same time will impact the environment and biodiversity as little as possible, given the goals. We need joint policies, not a piecemeal approach.

"Threatened species are often (though not always) found in areas where poverty problems are greatest. Our piece argues for better research into effects of poverty reduction measures on biodiversity, and for policy makers to adopt a more synergistic strategy to ensure, as far as possible, compliance to both MDG and CBD commitments."

The Centre for Ecology and Evolution is a joint venture between UCL, the Institute of Zoology (Zoological Society of London), Natural History Museum, Imperial, Queen Mary, Royal Holloway and Kew Gardens, and has strong links with other institutions in London. It is a centre of excellence in research and  teaching based on the understanding that ecology and evolution are vibrant, basic sciences, and research in these areas underpins our understanding of conservation, agriculture and medicine.