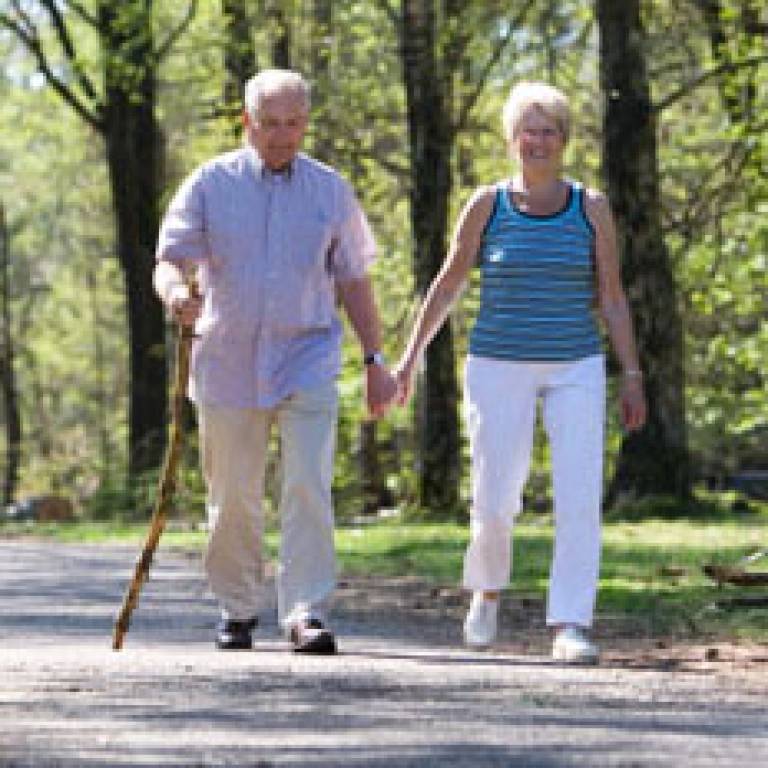 UCL scientists have extended the lifespan of mice by up to a fifth and cut the number of age-related diseases the animals suffer.

The research, which is published today in the journal Science, involved blocking a key molecular pathway, which mimics the health benefits of reducing calorie intake and suggests that drug treatments for ageing and age-related diseases are feasible.

In the 1930s scientists showed that reducing the calorie intake of laboratory rats while maintaining sufficient vitamins, minerals and other important nutrients in the animals can have health benefits. Evidence also suggests that calorie restriction can have health benefits for humans, too, though it is unclear whether it can increase longevity.

Professor Dominic Withers and colleagues from the UCL Institute of Healthy Ageing have discovered changes in the ageing process in a strain of mice which were unable to produce a particular protein known as S6 Kinase 1 (S6K1).

S6K1 is involved in the body's response to changes in levels of the food that we eat. Such nutrient-sensing systems are crucial in enabling the body to respond appropriately to changing food levels in terms of growth and reproduction, and also, it seems, ageing.

The research team demonstrated that deleting the S6K1 protein in mice has a wide range of health benefits which appear to mimic the action of calorie restriction. While the effect was dramatic in female mice, their male counterparts showed little difference in lifespan but showed some of the health benefits. The reasons for these differences between the sexes is unclear.

"Blocking the action of the S6K1 protein helps prevent a number of age-related conditions in female mice," explained Professor Withers. "The mice lived longer and were leaner, more active and generally healthier than the control group. We added 'life to their years' as well as 'years to their lives'."

The researchers compared the mice without S6K1 with normal mice at age 600 days - the equivalent of middle age in humans. The female mice without S6K1 were leaner, and had stronger bones; they did not show the usual age-related decline in insulin sensitivity and were therefore protected from type 2 diabetes; they performed better at motor performance tasks - a measure of attributes such as balance, strength and coordination; and were more inquisitive and exploratory, suggesting that their senses and cognition were better. Even their T-cells, an important part of the immune system, appeared more 'youthful', implying slowing of the usual age decline in immunity.

The findings suggest that calorie restriction acts via the S6K1 pathway. Further studies showed that the beneficial effects of blocking S6K1 were mediated via increased activity of a second molecule, AMPK, which regulates energy levels within cells. In particular, it is activated when cellular energy levels fall, which can occur when calorie intake is reduced.

Drugs that activate AMPK are already in use in human patients to treat type 2 diabetes - metformin, a widely-used drug for the disease, is thought to work by activating AMPK.  A recent study in the journal Nature showed that the drug rapamycin also extended the lifespan of mice. Rapamycin is used in humans to prevent organ rejection after transplants, and could not be administered as an anti-ageing drug in its current form. However, rapamycin blocks the activity of S6K1 and may therefore extend lifespan through its effects on S6K1.

Together these studies provide evidence that this is a drug-sensitive pathway controlling ageing in mammals and suggest new approaches for the treatment of age-related diseases.

"We are suddenly much closer to treatments for ageing than we thought," said Dr David Gems, one of the study's authors. "We have moved from initial findings in worm models to having 'druggable' targets in mice. The next logical step is to see if drugs like metformin can slow the ageing process in humans."

Th research was primarily funded by the Wellcome Trust. Funding support also came from the Medical Research Council, Research into Aging and the Biotechnology and Biological Sciences Research Council.

The UCL Institute for Healthy Ageing brings together researchers working on the basic biology of ageing with those working to understand the causes of ageing-related disease, with the goal of improving the health and quality of life for older people.