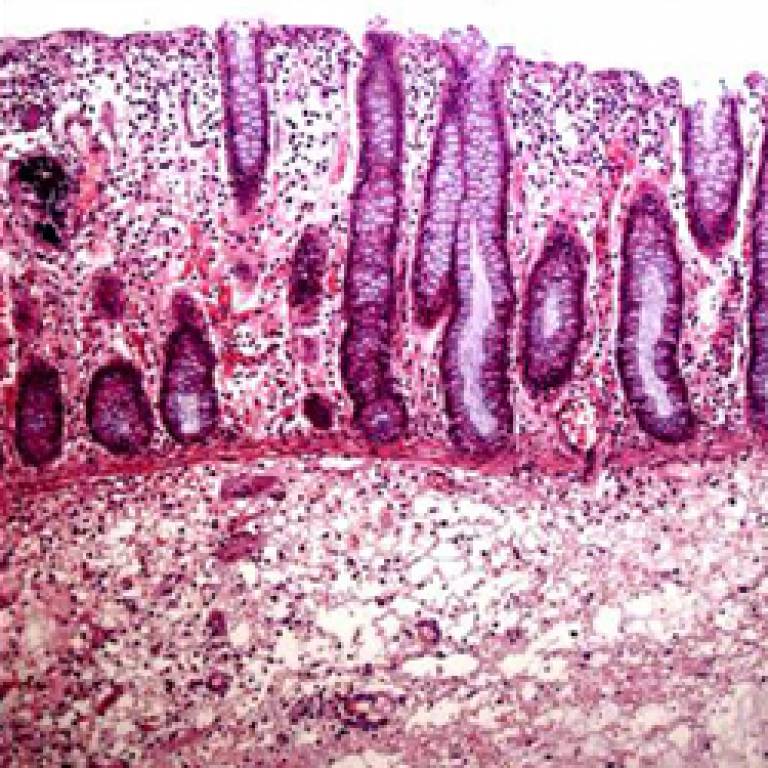 UCL researchers were part of the team to discover that mutations in either of two related genes can cause a severe form of inflammatory bowel disease (IBD) in young children.

Dr Erik Glocker (UCL Infection & Immunity) said: "This discovery is a milestone in research on inflammatory bowel disease, and will enable us to gain further insights into the physiology and immunity of the intestine."

Dr Glocker found the first mutation in the protein IL10R2 identified in the study. Analysis of additional patients with early onset colitis revealed mutations in IL10R1.

IL10 plays a crucial role in keeping the body's inflammatory responses in check. The human body is continually generating local inflammatory responses to control microbial infections and to repair damage from toxins, but if that inflammatory response is not properly controlled tissues may be excessively damaged. When either IL10R1 or IL10R2 is mutated, the signals from IL10 cannot be received, and the resulting inflammation causes tissue damage, especially in the gastrointestinal system.

The gene identification effort was led by Professor Bodo Grimbacher at UCL Medical School (Royal Free Campus Hampstead), and head of the Marie-Curie Excellence Research Group, who said: "This discovery will lead to future therapeutic options not only in children but potentially also in adult patients with IL10 signalling problems."

Other research groups focusing primarily on adult-onset IBD have identified dozens of genes and variants that affect the risk for IBD, but this is the first study to show that a single genetic mutation is sufficient to cause the disease.

The collaborative study included researchers from UCL, the National Center for Biotechnology at the National Institutes of Health, Hannover Medical School in Germany and several other institutions.

Discovering the genetic mutations meant that the researchers were able to successfully treat one of the study patients with a bone marrow transplant (BMT). The patient, who had not responded to other therapies, showed a dramatic improvement following the BMT and has remained in remission for more than a year.

The decision to treat one of the study subjects with a BMT was based on several factors. A precondition for considering a BMT is that the affected gene is normally active in bone-marrow derived cells, which is the case with both of the genes mutated in the patients. The disease also is so severe in patients with the identified mutations that the potential benefits of a BMT may outweigh the risks, which was the conclusion for the patient treated in the study. The patient also had a healthy sibling who matched as a donor, which enabled the transplant.

Professor Bodo Grimbacher also led a separate study in which a genetic mutation has been identified that may put individuals at increased risk of fungal infections. The recently published study marks a significant step in understanding genetic susceptibility to fungal diseases and may have implications for people suffering from chronic mucocutaneous candidiasis (CMC), as well as more common infections like vaginal or oral candidiasis (thrush).

UCL Medical School is committed to excellence in education and has a strong reputation for teaching informed by cutting-edge research. The School has a distinguished cadre of academic staff who are at the forefront of international research in medical sciences and clinical medicine.

The School has a distinguished history; it emerged from the amalgamation of Middlesex Hospital, University College Hospital and the Royal Free Hospital. These organisations combine a rich past in the history of science and medicine with advanced clinical practice. Among past and present staff are Nobel Prize winners (Huxley, Hill and Katz) and numerous Fellows of the Royal Society and the Academy of Medical Sciences.