Scientists get up close to bacteria's toxic pumps 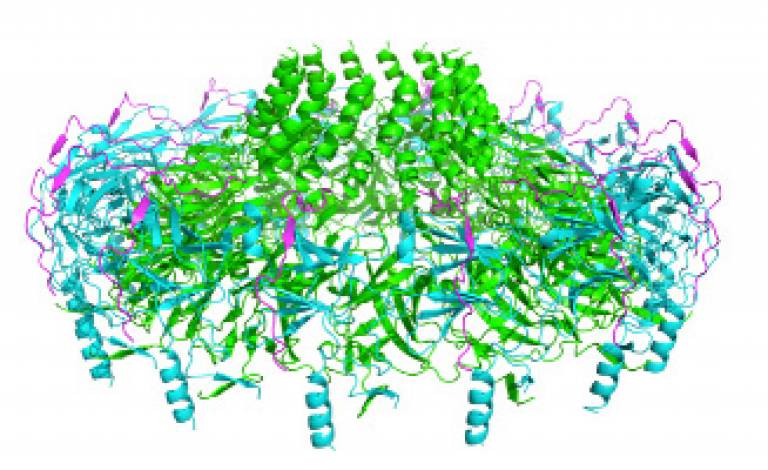 UCL scientists are building a clearer image of the machinery employed by bacteria to spread antibiotic resistance or cause diseases such as whooping cough, peptic stomach ulcers and legionnaires' disease.

The spread of antibiotic resistance amongst bacteria is a growing problem, making certain diseases increasingly difficult to treat. New strategies for attacking the bacteria are needed, yet virtually no novel-mechanism antibiotics are currently in development.

Gram-negative bacteria - such as those which cause stomach ulcers and a number of other serious diseases - are particularly difficult to attack as they have a double wall, incorporating an outer membrane surrounding the bacterial cell wall, which interferes with drug penetration.

Research funded by Wellcome Trust scientists is building up a clearer picture of how Gram-negative bacteria infect the host's cells - and how they spread antibiotic resistance.

Professor Gabriel Waksman and colleagues at the Institute of Structural and Molecular Biology at Birkbeck and UCL are studying 'type IV secretion systems', cellular 'nanodevices' which behave like pumps. These tiny machines span across the double membrane of the bacteria, pumping toxins out into host cells and antibiotic resistance genes into antibiotic-sensitive bacteria. This pump may offer a chink in the armour of Gram-negative bacteria for novel antibiotics to exploit.

Professor Waksman and colleagues have previously described the structure of the core component of the pump, using a technique known as cryo-electron microscopy. Now, in a paper published in the journal Nature, the researchers describe in detail the crystal structure of the outer membrane part of this complex. This time, the researchers used x-ray crystallography, which gives a much higher resolution than cryo-electron microscopy, allowing each atom in the structure to be identified and localised.

"X-ray crystallography gives us a much closer look at how this pump is working," explains Professor Waksman. "It's like examining a car: when you first look at a car, you see its shape, but might not understand how it works. It's only by looking under the bonnet that you can see the engine and get a clearer idea of how it works.

"The big question for us is 'how does this pump work?', and that's what we're looking at now. By taking the pump apart and seeing how its engine works, we open up the way to 'throwing a spanner in the works' and stopping the pump working."

Although the component of the pump that is described in the Nature paper is only a ten-thousandth the width of a human hair, it is the largest outer-membrane complex for which the structure is known at high resolution. It provides the first glimpse of a channel formed by more than one protein.

Toxins enter the pump through membrane channels that are integral parts of the pump. These channels are made of proteins embedded in the membrane. In large pumps, such as type IV secretion systems, these channels are very complex because they are made of many proteins: this new structure is made of three proteins, each present in fourteen copies. The extraordinary complexity of the arrangements of the proteins in the complex provides the first glimpse at the inner workings of the machinery.

Type IV secretion systems were first discovered in Agrobacterium tumefaciens, which uses the system to transfer tumour-inducing DNA into plants, causing "crown gall", which can be devastating to crops such as grape vines, sugar beet and rhubarb. However, crop scientists have been able to successfully exploit this transfer system as a way of introducing new genes into industrial crops, conferring herbicide-resistance and resistance to pathogens.