The fall of the Berlin Wall: perceptions of the past

Twenty years after the fall of the Berlin Wall, 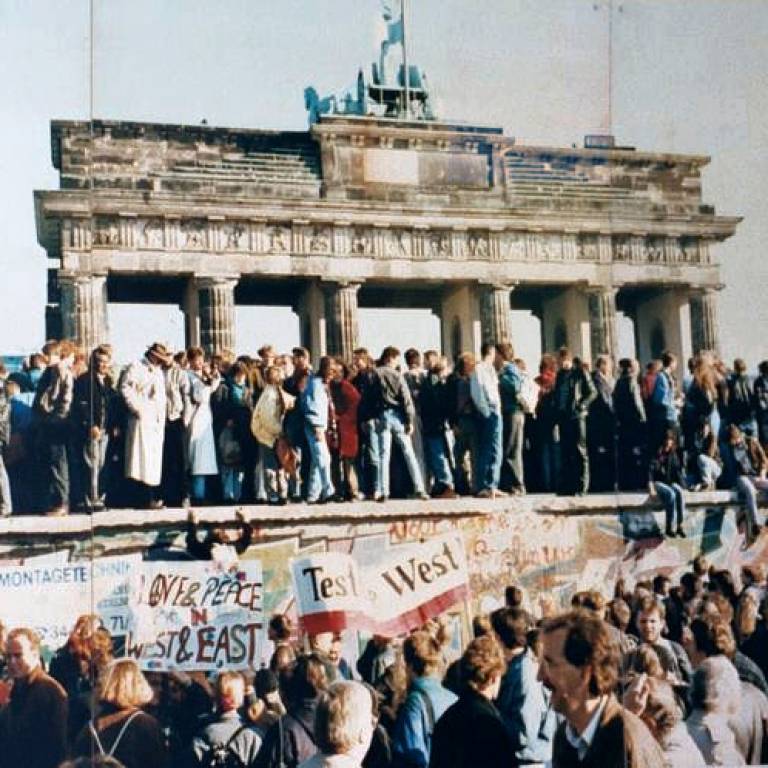 ucl.ac.uk/german/aboutus/staff/mary-fulbrook" target="_self">Professor Mary Fulbrook (UCL German) explains the rise of nostalgia for life in the East.

The opening of the Berlin Wall on 9 November 1989 was greeted with virtually universal acclamation. It was even an official spokesperson for the GDR's ruling communist party, the SED, who conveyed the momentous Politburo decision that the Wall would no longer serve the function, exercised for 27 years, of keeping people inside the GDR against their will. The unification of Germany on 3 October 1990 was far from anyone's imagining at this time; but the fall of the Wall came to symbolise the end of the Cold War that had divided Germany and Europe since the defeat of Hitler. It was a historic moment of which Germans like to be proud (and they have precious few such in recent history).

But longer term reflections have cast the East German past in a different light; both more bitterly contested, and more yearned after, than one might have thought possible.

Condemnation of course continued. Lengthy parliamentary commissions of inquiry focused on 'overcoming' the SED dictatorship; the media shone a spotlight on the State Security Service (Staatssicherheitsdienst, or Stasi), bringing devastating stories to public attention; so too did dramatic representations such as Anna Funder's journalistic Stasiland and Florian Henckel von Donnersmarck's box office success, Das Leben der Anderen. Contested landscapes of commemoration provoked heated debates over who and what should be remembered, and at what cost to other 'sites of memory', both physical and emotional. Such condemnations naturally provoked angry responses from the expected quarters on the far left, with political debates continuing.

More surprising, however, was the registration of a growing sense among 'ordinary' East Germans that their past was being misrepresented. While they had played a major role in bringing down the old regime, many now started to defend aspects of GDR society. In part, such yearning focused on food and consumer items, the 'furniture' and 'taste' of the past, in a wave of 'Ostalgie' (nostalgia for the East), readily exploited by capitalists cashing in on a new tourist trade. In part, it was encouraged by films such as Thomas Brussig's and Leander Haußmann's Sonnenallee and Wolfgang Becker's Goodbye Lenin! - the latter unleashing an unlikely run on Spreewaldgurken (a GDR brand of sour gherkins).

Many commentators dismiss such nostalgia as 'tainted memories' of a mythical past seen through 'rose-tinted spectacles'. But should one really dismiss people's memories of their own lives? Was the GDR really only sustained by repression and fear? My own research suggests a more complex picture.

Many east Germans express longing for what, in contrast to the competitive individualism of western capitalism, they retrospectively see as a more 'peaceful' society, living 'ordered lives' in which it was possible to combine work with time for family, friends and affordable leisure activities. Weighing up the merits and disadvantages of two different systems, some wonder whether the availability of oranges and bananas really makes up for the loss of social security, a sense of community, 'togetherness' and warm social relations; and whether 'freedom to travel' really means very much when eking out a marginal existence on unemployment benefits.

Different generations have varying experiences. Those born in the late 1920s and socialised entirely under Nazism ironically became the backbone of the communist system; the 'best times' in their lives were the 1950s, when they founded new families as well as building up the new 'anti-fascist state'. In 1989, they were able to retire. Their problems were not so much economic as existential: they were forced, in a sense, to re-evaluate the whole of their lives. Those born in the early 1950s were disillusioned by the gap between ideals and realities, and at the forefront of the movements leading to the fall of the Wall. But they were also the greatest 'losers' of unification: many found it difficult to retrain or to retain their old positions. Having achieved a long-term aim of 'arrival in the West', they now found it held little by way of future prospects; accordingly they revised their views of the past. Those who were children or teenagers in 1989 had generally 'happy memories' of GDR childhoods; they were, moreover, relatively cosmopolitan, growing up in a period of global youth culture. After unification, they were best placed to take advantage of new opportunities and enjoy the new present.

There is, then, a more fundamental way in which perceptions of the past are intimately bound up with a sense of self. And it is this deeper, anthropological aspect that approaches focusing solely on force and repression, the Stasi and the Wall, ignore. But without understanding the ways in which people lived through the GDR, we cannot understand how nostalgia for aspects of East German society has risen so remarkably since the people themselves helped to bring down a hated state.

Image: The Brandeburg Gate section of the Berlin Wall, 9 November 1989

Listen to Professor Fulbrook discuss her research into this phenomenon further on ABC Radio National in the programme 'The Fall of the Berlin Wall: the cultural differences'.