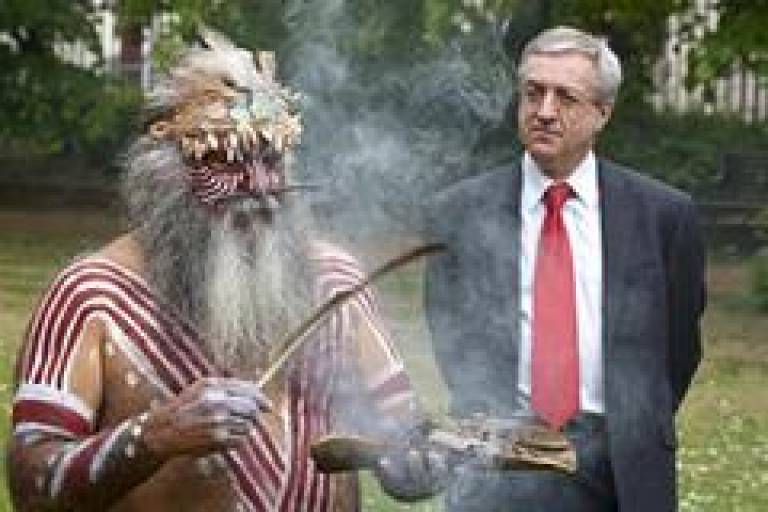 
Two Ngarrindjeri elders visited UCL on 14 May to collect indigenous human remains that were under the safekeeping of UCL Museums and Collections and return them to Australia.

In 2008, UCL was approached by the Australian High Commission to house the remains which were sourced at a private auction and subsequently removed from sale. Following biometrical analysis, they were confirmed to be of Australian Indigenous origin.

As part of the repatriation, Major Sumner and fellow elder George Trevorrow, members of the Ngarrindjeri group based in South Australia, conducted a traditional smoking ceremony in Gordon Square, in front of the UCL Institute of Archaeology.

Major Sumner performed the traditional rites with boomerangs and smoking eucalyptus leaves which are fanned with a pelican feather. The ceremony prepared the wandering spirits for their return home. Major Sumner explained that a pelican feather is used to fan the smoke from the eucalyptus leaves because the bird has a spiritual symbolism in indigenous culture, 'healing' the remains and those who attend the ceremony.

George Trevorrow spoke about the group's efforts to repatriate the remains of indigenous people around the world. About 600 remains are still in museums and collections in the UK and have yet to be repatriated.