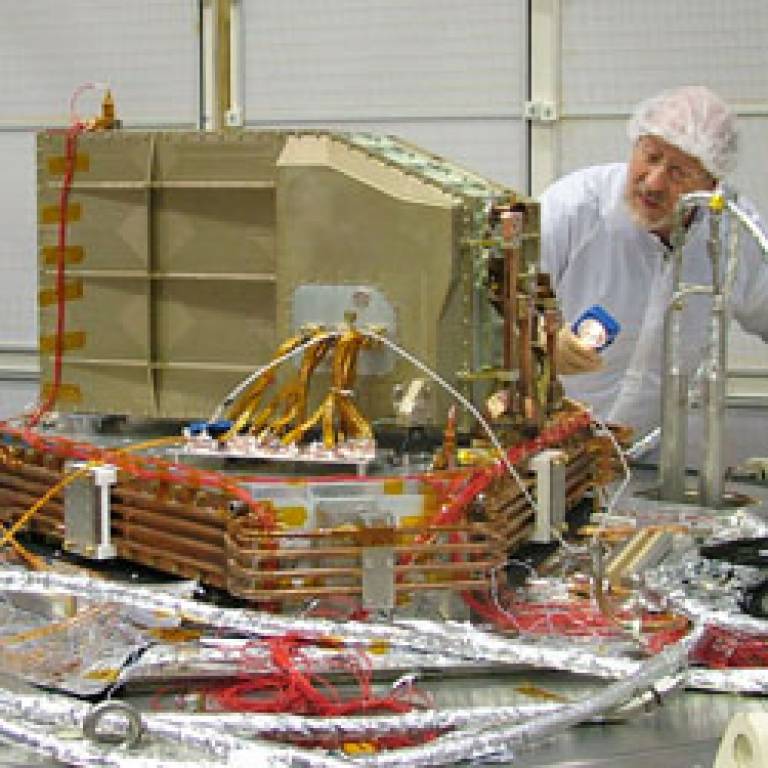 UCL scientists are celebrating the launch of a European satellite designed to peer into the Solar System and beyond.

The Mullard Space Science Laboratory (MSSL) and UCL Physics & Astronomy have been involved in preparations for the European Space Agency's Herschel mission.

Carrying the largest telescope to be flown in space, Herschel was launched today on an Ariane 5 from Europe's Spaceport in Kourou, French Guiana.

Herschel will peer through obscuring clouds of dust to look at the early stages of star birth and galaxy formation; it will examine the composition and chemistry of comets and planetary atmospheres in the Solar System; and it will be able to study the star-dust ejected by dying stars into interstellar space, which form the raw material for planets such as Earth.

MSSL supplied one of the three instruments on board Herschel. The Spectral and Photometric Imaging Receiver (SPIRE) contains an extremely sophisticated camera which will offer astronomers a powerful tool for many astrophysical studies.

Dr Matthew Page, Head of Astrophyics at UCL, was a co-investigator on the SPIRE project. He also has a leading role, alongside MSSL, in one of the major extra galactic surveys that will be carried out by Herschel, called HERMES. This survey will examine the formation and evolution of galaxies in the early universe.

Herschel is being launched in tandem with a second satellite, Planck, and the UK is playing major roles in both missions, with funding from the Science and Technology Facilities Council (STFC).

The Planck satellite will map the whole sky every six months by rotating on its axis while orbiting the sun synchronously with Earth, gathering vast amounts of data on diffuse structures, as well as on the large scale magnetic field in which our galaxy is enveloped.

It should detect with unprecedented sensitivity the primordial fluctuations of matter in the early stages of the universe, allowing a test of many cosmological models, and tracing the possible gravitational imprint of the Big Bang on the distribution of matter in the universe.

Professor Keith Mason, CEO of the Science and Technology Facilities Council, added, "Launches are always an incredibly tense and exciting time. This joint launch of Herschel and Planck is especially tense for us because of all the hard work and expertise UK scientists have contributed to these missions. The UK continues to be at the cutting edge of science and technology and momentous space missions like this, with a large degree of UK involvement, are evidence of the talent and expertise we have here in the UK."

UCL is home to the UK's largest university-based space science research group, in the shape of the renowned Mullard Space Science Laboratory (MSSL), also known today as UCL Space & Climate Physics. The laboratory delivers a cutting-edge science programme, underpinned by a capability in space science instrumentation, systems engineering and project management. It is also committed to a broad outreach programme and is very happy to receive enquiries from the public and fellow space science professionals. UCL also has one of the largest astrophysics groups in the UK, based within UCL Physics & Astronomy.