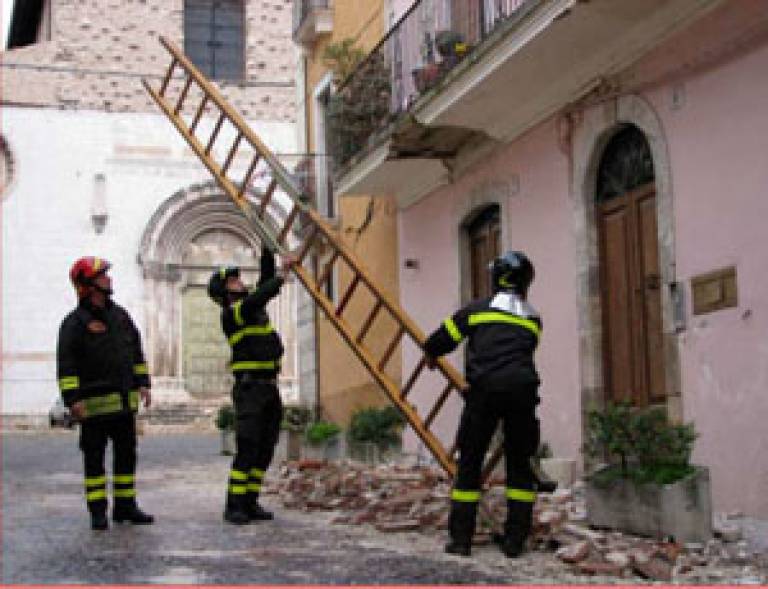 A team of experts led by Dr Tiziana Rossetto (UCL Civil, Environmental and Geomatic Engineering) has visited the Abruzzo region of Italy, where an earthquake killed 299 people last month.

The earthquake, which struck near the administrative capital of L'Aquila on 6 April, led to the collapse of over 15,000 buildings, leaving 1,500 people injured and about 34,000 living in emergency shelters.The UK Earthquake Engineering Field Investigation Team (EEFIT) consisted of experts on earthquake engineering, geology, seismology, geohazards, risk modelling and related disciplines.

The nine-strong team spent six days in the disaster zone looking at the performance of residential and industrial buildings, infrastructure and geotechnical failures.

They examined why the region suffered so much damage from an earthquake of relatively modest size (a surface wave magnitude of 6.2, a seismological scale based on the measurement of waves travelling primarily along the uppermost layers of the earth).

One of the main reasons was found to be the poorly maintained masonry of the region's many one- and two-storey residential buildings, whose collapse was the major cause of death.

Well maintained or strengthened masonry buildings performed much better, as did buildings with reinforced concrete frames.

The infrastructure also performed well, with few closures of roads or reported pipe breakages, and the disaster management was effective.

"What was good to see was where they had been retrofitted with cable ties and other measures to make them a bit stronger, they resisted the earthquake and were less lethal. Reinforced concrete structures also tended to perform better.

"Unfortunately, many European town centres are vulnerable to earthquakes. This is because of their age and the lack of appreciation of the seismic hazard that they are subjected to - hence the lack of investment in their upgrading.

"There really was a distinct difference between buildings that had been upgraded and those that hadn't, and we hope that this mission will promote the message that we do need to look at our town centres and upgrade them for earthquake resistance."

The mission also allowed EEFIT to assess the performance of the Virtual Disaster Viewer, a web portal that allows the team to share their field observations.

Researchers from the University of L'Aquila have appealed for assistance to help rebuild the devastated town.

They want colleagues from around the world to contribute ideas, proposals and projects to transform L'Aquila into an 'open laboratory' where new technologies and historical studies can be developed side by side.

UCL is also helping to raise awareness of the long-term effects of the Sichuan earthquake, which devastated the Chinese province in May 2008.

The earthquake, which had a surface wave magnitude of 8.0, is estimated to have killed about 70,000 people.

The Bartlett School of Architecture co-organised the competition, which involved designing schools for areas affected by the earthquake.

Professor Lim said: "UCL and the Bartlett have very strong links with China through our students, alumni and research collaborations - it was important we lend our support for such a worthy cause.

"The Bartlett, with our expertise in the built environment, can very much help with the rebuilding of the earthquake-devastated region. We can advise on how good planning and architecture can inform learning processes and contribute to creating sustainable communities."

The Earthquake Engineering Field Investigation Team is a group of British earthquake engineers, architects and academics who seek to collaborate with colleagues in earthquake prone countries in the task of improving the seismic resistance of both traditional and engineered structures.