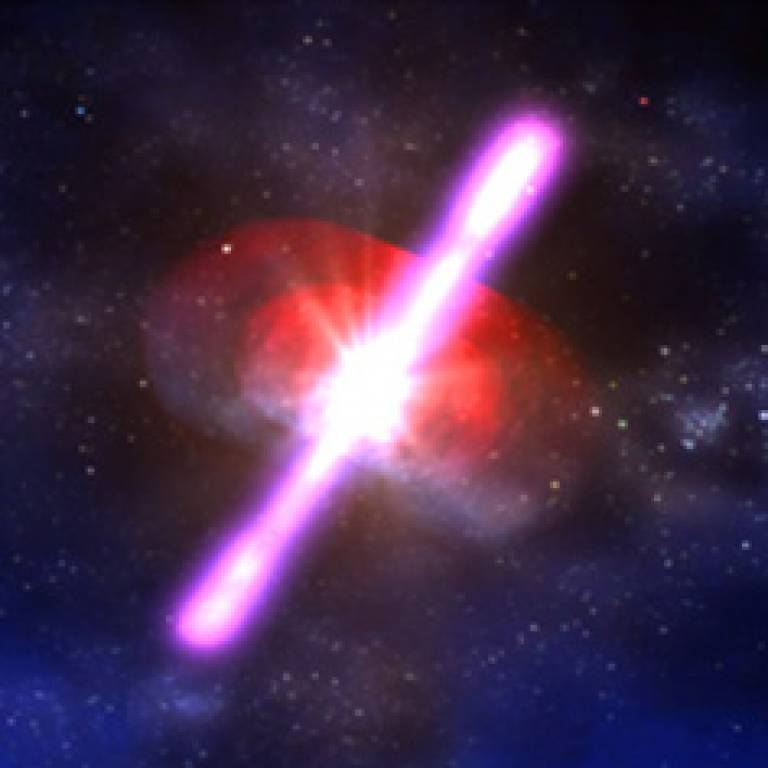 UCL astronomers from the Mullard Space Science Laboratory (MSSL) have captured information from the early stages of a gamma ray burst - the most violent and luminous explosions occurring in the universe since the Big Bang - using a telescope aboard the NASA Swift Satellite.

The team of astronomers were able to obtain an ultraviolet spectrum of a gamma ray burst (GRB) just 4 minutes 11 seconds after its onset - the earliest ever captured - through an Ultraviolet-Optical Telescope (UVOT). Further use of the telescope in this way will allow scientists to calculate the distance and brightness of GRBs within a few hundred seconds of their initial outburst, and to gather new information about the causes of bursts and the galaxies from which they originate. The work is published in the current issue of the Monthly Notices of the Royal Astronomical Society (MNRAS).

It is currently thought that some GRBs are caused by immense explosions following the collapse of the core of a rapidly rotating, high-mass star into a black hole, but there are still many mysteries surrounding them.

Dr Martin Still from the MSSL said: "The UVOT's wavelength range, coupled with the fact that Swift is a space observatory with a speedy response rate, unconstrained by time of day or weather, has allowed us to collect this early ultraviolet spectrum."

Dr Paul Kuin, also from MSSL, who works on the calibration of the UVOT instrument explained: "By looking at these earlier moments of gamma ray bursts, we will not only be able to better calculate things such as the luminosity and distance of a burst, but to find out more about the galaxies that play host to them and the impact these explosions have on their environments. Once this new technique is applied to much brighter bursts, we'll have a wealth of new data."

Since its launch in 2004, the Swift satellite has provided the most comprehensive study so far of GRBs and their afterglows. Using the UVOT to obtain ultraviolet spectrums, the Swift team will be able to build on this study and even determine more about the host galaxies' chemistry.

Dr Kuin commented: "The new spectrum has not only allowed us to determine the distance of the gamma ray burst's host galaxy but has revealed the density of its hydrogen clouds. Learning more about these far-away galaxies helps us to understand how they formed during the early universe. The gamma ray burst observed on this occasion originated in a galaxy eight billion light years from Earth."

Swift is a NASA mission in collaboration with the Science and Technology Facilities Council (STFC) in the UK and the Italian Space Agency (ASI).

Image:
Gamma ray bursts are common but fleeting events that were discovered by astronomers in the late 1960s. Many scientists say longer bursts (more than four seconds in duration) are caused by massive star explosions; shorter bursts (less than two seconds in duration) are caused by mergers of binary systems with black holes or neutron stars. While uncertainty remains, in either scenario a new black hole is born. (Illustration: NASA/D.Berry)

UCL Context: Mullard Space Science Laboratory (MSSL)
Established in 1966, the MSSL is the UK's largest university-based space science research group. Its projects range from the study of Earth's climate to investigating explosive events that occurred at the very limits of the known universe. The MSSL has established an international reputation for developing highly innovative technologies in space science.

The centre has participated in over 35 satellite missions and over 200 rocket experiments. It has the unique capability of designing, building and testing instruments and other spacecraft systems on site. It offers courses on space science engineering, technology management and project management. MSSL staff are also committed to a broad outreach programme such as running websites for a general audience and organising school trips to the centre.