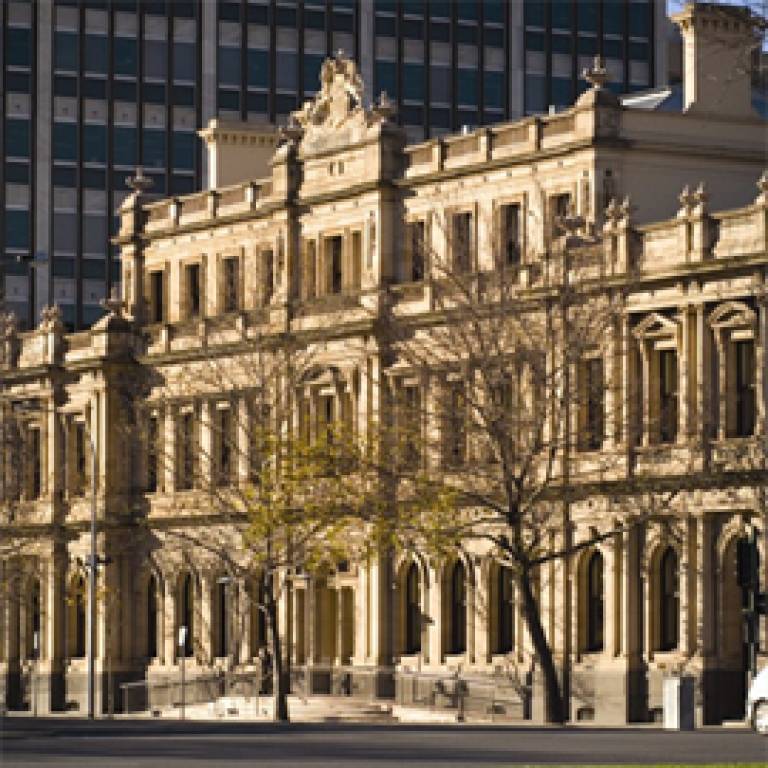 Professor Tony Owen has today been appointed as the first Director of the UCL School of Energy and Resources, Australia (UCL SERAus), the first overseas campus to be developed by UCL.

Professor Owen is currently Professor of Energy Economics at Curtin University of Technology and Co-Director of the Oil and Gas Management Research Group.  He will take up his new post on 1 April 2009.

UCL SERAus, was first announced last year and is the outcome of a partnership agreement between UCL, the Government of South Australia, and Santos Limited, one of Australia's largest energy companies. It will provide a range of programmes, designed for both new graduates and established professionals, to address areas of skill shortage identified by industry and government, and provide scientists and engineers with management skills through courses designed specifically for the energy sector.

UCL SERAus will be situated in the Torrens Building in Victoria Square, Adelaide.  This building is owned by the Government of South Australia and already houses the Carnegie Mellon University School of Public Policy and the offices of Cranfield University in Adelaide. UCL will therefore be a part of the South Australian government's dynamic vision for Adelaide to become a University City.

Professor Michael Worton, UCL Vice-Provost, said: "The creation of UCL SERAus is a major event in UCL's history. Significantly, we chose to base it in Adelaide, because we have found here the enlightened and forward-looking support of both the South Australian Government and Santos Ltd.  Given the importance of this venture, we are especially delighted to have such a dynamic Director as Tony Owen, who will lead the School with energy and vision."

Professor Owen said: "I took this position with the intention of generating for the School a world-class academic and policy-focused reputation on energy and resource issues. This will be achieved by employing highly qualified academic staff based in Adelaide, by utilising the extensive range of research capabilities contained within UCL, and by collaborating with Adelaide's other universities and energy/resource industry stakeholders in South Australia.

"Energy and resources policy plays a pivotal role at all levels of government decision making around the globe. The environmental impact of energy combustion, both locally and globally, necessitates the design of innovative market-based solutions and radical transformation of power technologies. This is one area that the School will be particularly well placed to address, in both teaching and research contexts."

South Australia Premier Mike Rann said:  "UCL's credentials in science, in energy and resource management are second to none, complementing this State's development of its immense resources in uranium, geothermal hot rocks, copper and other minerals. Attracting UCL is firmly aimed at jobs. Mining is a key to our future, and this is about plugging into the world's best. UCL is one of the world's great universities, recently ranked 3rd in the UK RAE Gold Medal rankings for research and 7th globally in the Times Higher Education Rankings; it counts 20 Nobel Prize winners among its former academic staff and students."

Professor Tony Owen has a PhD in Econometrics from the University of Kent (UK) and has held visiting appointments at the Universities of British Columbia, Colorado, Leeds and Exeter, the Organisation for Economic Cooperation and Development (Paris), the UK Department of Energy (Harwell), and the International Energy Agency (Paris). Before moving to Curtin, Professor Owen was Co-Director of the Centre for Energy and Environmental Markets (CEEM) at the University of New South Wales.

He is also a Fellow of the Royal Statistical Society, Past President (2004) of the International Association for Energy Economics, and a founding member and President of the Australian Association for Energy Economics.  He serves on the International Editorial Boards of Energy Policy and Energy Sources and is a member of Australia's Commonwealth Scientific and Industrial Research Organisation (CSIRO) Energy and Transport Sector Advisory Council.

His current research interests include the Cost Benefit Analysis of Future Energy Technology Options, International Resource Markets and the Economics of Climate Change: Mitigation and Adaptation.

South Australia is one of the most important minerals and energy jurisdictions in the world.  It has almost 40% of the world's known recoverable uranium reserves and significant volumes of copper, gold and silver.  It is ranked the 4th most prospective location in the world by Canada's Fraser Institute, has 53% of Australia's installed wind power capacity, more than a third of Australia's grid-connected solar energy and hosts more than 91% of Australia's known potential geothermal energy generation.

Santos is Australia's largest domestic gas producer, supplying sales gas to all mainland Australian states and territories, ethane to Sydney, and oil and liquids to domestic and international customers.Santos's financial commitment to communities is largely achieved through a structured sponsorship program that supports organisations and events which are valued by the communities in which it operates and which share Santos's values, particularly in the areas of the environment, the arts, education and youth.

To find out more about the UCL School of Energy and Resources, Australia, and to watch a video of the press conference, follow the links at the top of this article.

UCL has demonstrated expertise to produce solutions to practical problems, for example, developing new energy efficient glazing, finding new sources of major energy loss in buildings, fluidisation of waste and the aerodynamic design of turbo-machinery to improve power-plants. Several of these have resulted in spin-out companies, patents and changes to regulations on energy use.