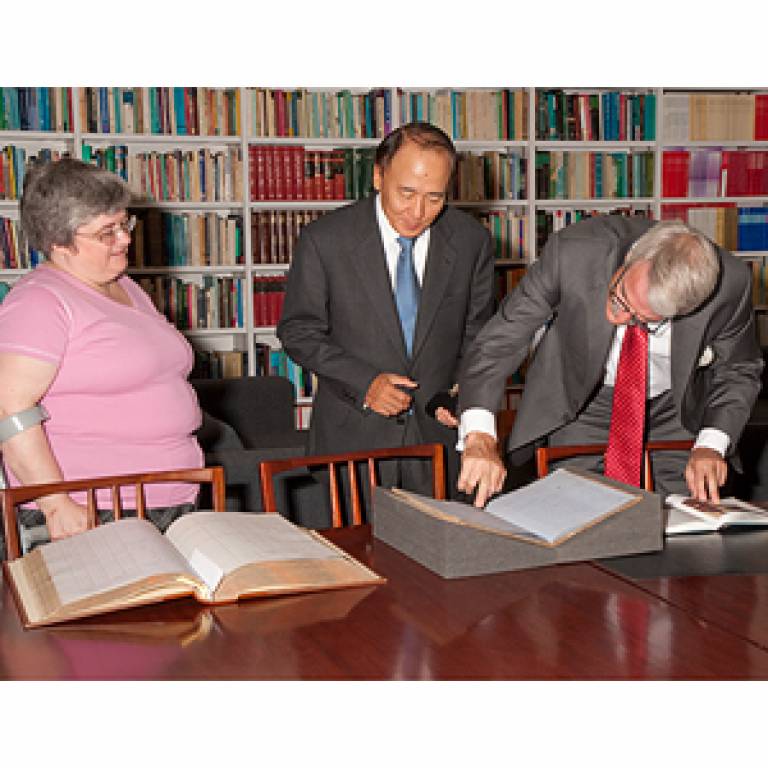 His Excellency Mr Shin Ebihara, the Japanese Ambassador discussed the place of higher education in the UK and Japan with UCL President and Provost Professor Malcolm Grant and Professor Derek Tocher, UCL Pro-Provost for East and South East Asia, at UCL on 25 June 2009.

Mr Ebihara's visit came in the wake of an announcement by the Japanese government of further investment in science and technology research. The ambassador and Professor Grant later attended the 2009 Sir Martin Wood Lecture, held at UCL. The lecture promotes in the UK the work of leading Japanese scientists and was organised by the London Centre for Nanotechnology.

UCL enjoys a fruitful relationship with Japan. In the academic year 2008/09, there are 50 Japanese members of staff and 105 Japanese students enrolled for study at the university, at all levels and in all faculties. UCL has student exchange schemes with the universities of Tokyo, Waseda, Yamaguchi, and International Christian University.

The London Centre for Nanotechnology - a joint venture between UCL and Imperial College London - established a partnership with Japan's National Institute for Materials Science in 2007. In addition, the university has a number of significant commercial and academic research collaborations with Japanese organisations, with particular strengths in Civil Engineering, Fine Art, Laws, Life Sciences and Space Science. For 15 years the leading Japanese pharmaceutical company EISAI has had a major laboratory at UCL. The success of this laboratory has led  EISAI to refocus their European activities in England.

UCL's links with Japan date back to the second half of the nineteenth century, when five young Japanese noblemen came to study chemistry at UCL; the so-called Choshu Five. These students and those who followed played a key role in steering the imperial state towards present-day Japan as an outward-facing, world-leading nation.