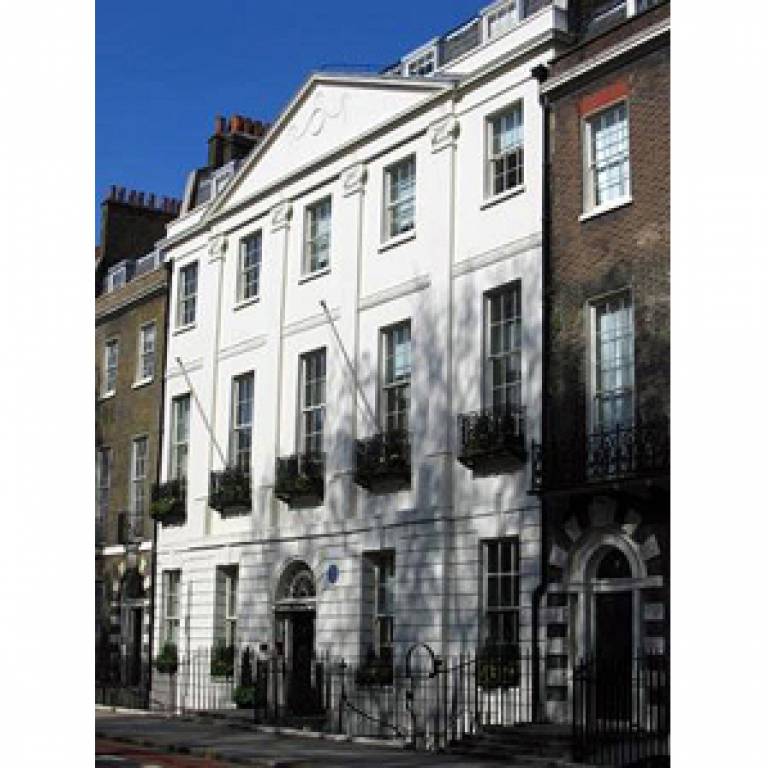 The three-year project, funded by a grant from the Leverhulme Trust, brings together a range of researchers from across several disciplines and institutions. The aim of the project is to piece together an archive, illustrating 19th-century Bloomsbury's development from a swamp to a hub of intellectual life, and the impressions gained are strikingly diverse.

Bloomsbury inventors, of both the authentic and the quack variety, were the subjects of Dr Deborah Colville's presentation. In the 19th century, Dr Colville explained, the epithet of 'inventor' was applied much more generously than it is today, and Bloomsbury, with its part-shady, part-academic reputation, was home to more than its fair share of the breed.

One of these was James Morison, inventor of the Universal Vegetable Pill, a would-be cure all that Morison marketed as a treatment for a striking number of complaints, including bashfulness, anxiety and ringworm. His Pill factory was located on Euston Road, and despite regular lampooning in the press, Morison remained passionate about his beliefs, campaigning against the medical establishment and the ills of vaccination. Plenty of people must have believed in what he had to say; the Pill was traded into the 1920s.

Rather more legitimate inventors in Bloomsbury included Frederick Scott Archer, whose invention of the wet collodion process changed the face of photography, enabling the making of finely detailed negatives, and JH Dallmeyer, who produced photographic lenses good enough for astronomical use.

German émigrés who fled to London in the aftermath of the failed 1848 revolution were the subject of Rosemary Ashton's talk. Many of these migrants, highly educated, yet socially unacceptable in conservative circles, found themselves drawn to Bloomsbury, thanks to the area's radical and inclusive educational institutions - not least UCL.

Karl Marx himself can be dubbed an honorary Bloomsbury-ite, argued Professor Ashton, since he spent his days in the Reading Room of the British Museum in Great Russell Street, writing Das Kapital. But many other 'Great Men of the Exile' (as Marx satirically dubbed his compatriots) were prominent in Bloomsbury society at those times.

One of these was Gottfried Kinkel, a charismatic art history professor from Bonn, who was imprisoned for leading a student uprising, and was then sprung from jail by an admiring pupil. Escaping to Britain with his wife and children, Kinkel very nearly came to be appointed Chair of English Language & Literature at UCL, a remarkable near miss for those times.

Another venerable German was Johannes Ronge, an advocate of free-living communities who was persecuted for his religious radicalism. His major contribution to English life was the introduction of the Kindergarten - an educational system for young children based on play - which was taken up here before it was even introduced in Germany. His work, A Practical Guide to the English Kinder Garten (1855), written with his wife Bertha, was in use well into the 20th century.

Taking as his starting point a contemporary newspaper account of a barrister arrested for drunkenness as he walked from lunch back to his chambers, Matt looked at the figure of the barrister's wife in mid-Victorian novels, including Anthony Trollope's Orley Farm and Mary Elizabeth Braddon's The Lady's Mile.

While Bloomsbury lies conveniently at the edge of London's inns of court, the area was considered to be on the wane by some people of fashion in the mid 19th century, and as a representative of the aspiring middle classes anxious to move up in the world, the figure of the barrister's wife in fiction gives a sense of contemporary anxieties about one's place in society, geographical and social, argued Matt.

Ever heard of John James Garth Wilkinson? While he is hardly a household name today, Wilkinson was once a leading figure in Bloomsbury society, explained Richard Lines, Secretary of the Swedenborg Society.

Included in a discussion of Swedenborg in Emerson's Representative Men (1850), author and physician Wilkinson knew all the literary stars of his day, and advocated many progressive ideas for his times; arguing strongly against the oppressive laws that kept women inferior to men, and decrying hunting. Wilkinson espoused the mystical ideas of Swedenborg, the 18th century Swedish philosopher, and was involved in many fashionable interests of his time, including homeopathy and spiritualism.

Alexander Maconochie, UCL's (and Britain's) first Chair of Geography, was the subject of a talk by Hugh Clout, Emeritus Professor of Geography at UCL.

Born in 1787 and conscripted into the navy by his early 20s, Maconochie was no armchair philosopher; he gained much of his geographical knowledge at first hand, some of it whilst marching 400 miles as a prisoner of the Dutch military forces. Having published a well-received review of the Pacific Ocean, Maconochie moved to Bloomsbury in 1828, where he became co-founder and founding secretary of the Royal Geographical Society.

He was appointed Chair of Geography in 1833, and espoused a very practical, Benthamite view of geography, focusing on the commercial, military and health applications of geography.

His career didn't stop there - on leaving UCL three years later, Maconochie went on to found a penal colony, where he became a passionate advocate of penal reform. His treatment of prisoners, called the Marks system, gained Maconochie only limited recognition in his lifetime, but has earned him a place in history since then.

These talks and others gave a striking insight into the energy and diversity of Bloomsbury life during a time of unprecedented expansion and change.

What next for the Bloomsbury project?

Over the last year, Professor Ashton, Dr Colville and Professor Hardy have given talks about the Bloomsbury project at the invitation of UCL Council, the Mary Ward Centre in Queen Square, the Institute of Historical Research, and the Primrose Hill Society, and Professor Ashton has led a historic walk of Bloomsbury.

The Bloomsbury Project is open to invitations from interested groups and organisations who would like to learn more about Bloomsbury during 2009/2010 -  and to keep up to date or submit your own insights into the history of Bloomsbury, visit the Bloomsbury blog.

Eldon House on Bedford Square. Built 1775-1783 by Gertrude Leveson-Gower, widow of the fourth Duke of Bedford, the square initiated much residential development in Bloomsbury.

Colonnade, built soon after 1795, stands on the boundary between the parishes of St Pancras and St George's Bloomsbury, on the Foundling Hospital estate.

Russell Hotel on Russell Square. Thackeray used the square as the location for the family homes of both the Sedleys and the Osbornes in Vanity Fair.