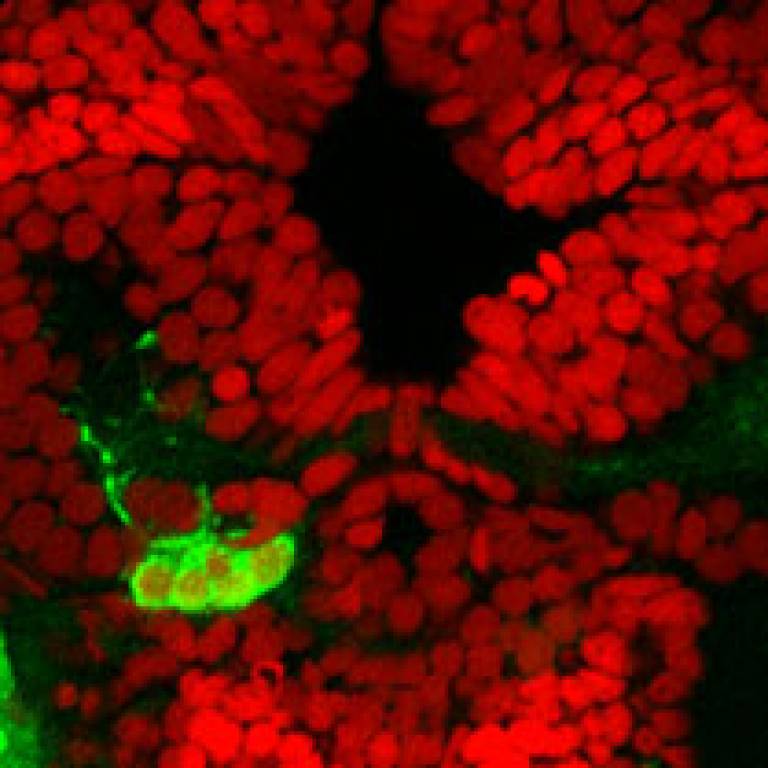 A team of UCL scientists has identified the mechanism which causes left-right asymmetry present in the brains of most animals, first evident at the time of early development.

By studying brain development in zebrafish, PhD student Jenny Regan and colleagues at Professor Stephen Wilson's laboratory have demonstrated that competition between two sides causes the brain to become asymmetrical. Asymmetry is thought to be important to enable the two hemispheres to specialise and operate more efficiently.

According to research published today in the journal 'Neuron', the UCL team have shown that a protein known as Fgf8 acts as a magnet to attract nerve cells to one side of the brain.

"Fgf8 is found in both sides of the brain, leading to a 'tug-of-war' competition between the two sides to attract the migrating group of nerves cells," says Jenny Regan. "This isn't a fair fight, however - Fgf8 on the left-hand side has an ally to help it win the battle."

A second protein, known as Nodal, is present only on the left and teams up with Fgf8 to attract the group of nerve cells, triggering a cascade of events that lead to asymmetric development of the brain, with neurons on the left making different connections to those on the right. The combined action of Fgf8 and Nodal ensures that when the asymmetry develops, it is usually in the same direction - this helps to explain why there is consistent handedness between individuals. Nodal is known to also play a role in other areas of the body where asymmetry occurs, such as the heart and positioning of internal organs.

If Nodal is inhibited, the competition is fairer and the group of nerve cells has an equal probability of migrating to the right or left side - a bias in the direction of migration can be restored by adding extra Fgf8 to one side of the brain.

"Brain asymmetry is essential for proper brain function," explains Professor Wilson. "It allows the two sides of the brain to become specialised, increasing its processing capacity and avoiding situations of conflict where both sides of the brain try to take charge."

He adds: "For example, faced with a predator, an animal would not want both sides of the brain to try to drive the escape as this might lead to conflict over which direction to turn. Instead, the animal might keep watch more with one eye (and consequently one half of the brain) and so each side of the brain might be dominant for particular activities."

Previous studies have shown that rearing chickens in the dark makes their brains less asymmetric. The chicks can still peck for food and watch out for predators, but only if doing one task at a time. If they try to do both at the same time, they are less efficient than fully asymmetric animals, in which one eye specialises in one task and the other eye in the other task.

In humans, people with schizophrenia have disrupted brain asymmetries but as yet, it is not clear if there is a causal link between the asymmetry and schizophrenia.

While the direction that brain asymmetry takes is not critical for survival, Professor Wilson adds that strong bias towards one direction is correlated to consistent behaviours and may be important in a population of social animals (such as humans and schooling fish).

For further information on this story, follow the links at the top of the page.

Image
On the left is an image of a normal (WT) zebrafish forebrain in which all cells are labelled with a red marker and left-sided parapineal (photoreceptive) neurons with an additional green marker. This image demonstrates a left-sided asymmetry which arises as a result of the protein Fgf8 attracting nerve cells to one side of the brain.

On the right is an image of a fish brain lacking the function of the Fgf8 gene (ace).   In this case, the green neurons remain stuck at the midline which can reduce the efficiency and processing capacity of the brain, as neither side specialises in a particular role.