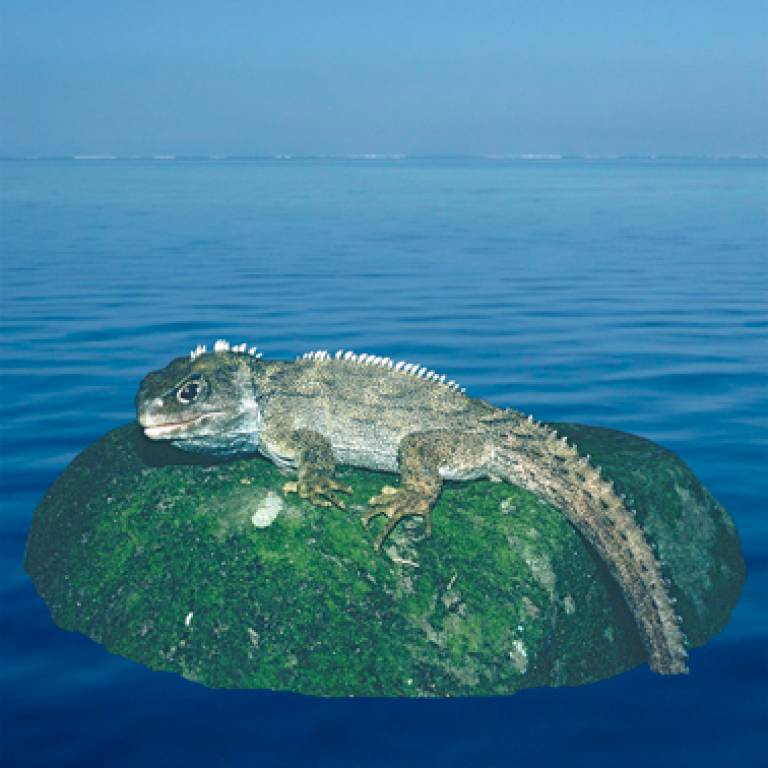 
The fossil of a lizard-like New Zealand reptile dating back 18 million years has been  identified by a team of scientists led by Dr Marc Jones (UCL Cell and Developmental Biology), triggering fresh arguments over whether the continent was fully submerged some 25 million years ago.

Today, the endangered New Zealand tuatara (Sphenodon) is a lizard-like reptile that is the only survivor of a group that was globally widespread at the time of the dinosaurs. The tuatara lives on 35 islands scattered around the coast of New Zealand, mainland populations having become extinct with the arrival of humans and associated animals some 750 years ago.

The oldest known Sphenodon fossil dates to the Pleistocene era (around 34,000 years old), while the new discovery dates to the Early Miocene some 19 to 16 million years ago (Mya). The fossil, of jaws and dentition closely resembling those of the present-day tuatara, bridges a gap of nearly 70 million years in the fossil record of the group between the Late Pleistocene of New Zealand and the Late Cretaceous of Argentina.

In a paper published this week in the 'Proceedings of the Royal Society B', the team - involving researchers from the University of Adelaide and the Museum of New Zealand Te Papa Tongarewa - says that its findings offer further evidence that the ancestors of the tuatara have been on the landmass since it separated from the rest of the southern continents (Gondwana) some 82 Mya.

Lead author Dr Marc Jones, UCL Cell and Developmental Biology, said: "It has been argued that New Zealand was completely submerged during the Oligo-Miocene drowning of the continent some 25 to 22 million years ago (Mya). However, the diversity of fossils now known from the Miocene (St Bathans Fauna of the Manuherikia Group) suggests it is more likely that enough land remained above the water to ensure the survival of a number of species, such as frogs, kauri trees and several modern freshwater insects, as well as the tuatara."

Image: A humorous depiction of an ancestral tuatara (Sphenodon) sitting on an exaggeratedly small piece of land during the height of the debated submergence of New Zealand. Photo by Alan J D Tennyson of a wild tuatara on Stanley Island; prepared and manipulated by Marc E H Jones.