Doctor in the newsroom 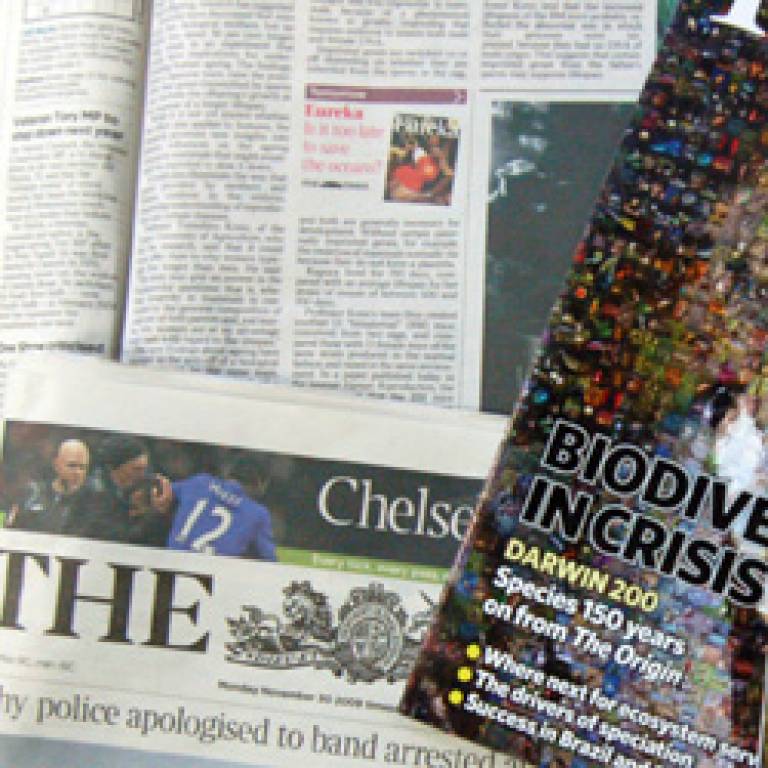 UCL's Dr Kate Mandeville went inside the newsroom during a hands-on placement with The Times to uncover the workings of science journalism.

"This year, I was lucky enough to win a fellowship with the Science Editor of The Times newspaper, Mark Henderson. My discipline - public health - is all about communication with the public. So what could be more interesting than a placement with the most powerful public communicator of all: the mass media.

Each year, the British Science Association awards ten Media Fellowships for scientists to spend three to eight weeks working with a science journalist in national press, broadcast and internet media outlets. The aim of the fellowships is to create awareness amongst scientists of the mentality, pressures, and constraints of science journalism. There's a general reluctance amongst scientists to talk to journalists, and it's often to do with an underlying fear that your precious results will be twisted into a sensationalist story with no regard for the facts. Although this doesn't reflect the reality, the outcome is that not enough science is communicated to the public. And when it is, there's often not the understanding of what journalists need to write their stories quickly and accurately. The media fellowships were set up to bridge this gulf, and the hope is that the fellows will go on to use their new insights in their work and also to advise their colleagues on working with the media.

Why I applied for a fellowship

"My application to the British Science Association Media Fellowship scheme was quite a chance occurrence. A circuitous email route led to a non-committal click of the mouse, which in turn led to a sudden surge of interest. Here, for once, was media training worth doing.

Public health is quite keen on media training. After all, you never know when you'll be the person standing in front of the microphones explaining your region's rocketing MRSA figures. Yet the couple of media training courses I had been on before this seemed far removed from the reality of reporting. Holed up for a day in a Holiday Inn with nine other non-journalists writing press releases for fictional events certainly didn't give me much insight into the media mentality.

A few months later, I received a welcome email informing me that I had won a place. Even better - it was at a newspaper with an outstanding science reputation and a highly respected science editor.

"Of course, now that I had the placement, all manner of anxious thoughts crowded in. I previously had written only a few random reflections on hospital life for medical magazines - hardly the same as writing for a national newspaper. And although I was interested in science, I wouldn't say that I was up to date with current scientific affairs - the British Medical Journal was my regular reading rather than Nature or Science.

Luckily, a pre-placement coffee and discussion with Mark put me at ease. The only sticking point was when he asked if I would consider myself a fast writer. Memories of spending endless hours at the computer battling over a single sentence for a scientific paper popped into my head, but I decided to settle on "medium" as a reply.

"Walking into The Times newsroom is a fantastic experience. Although it is superficially just another open-plan office cluttered with monitors and people, it is a completely different environment. I had visions of burly editors with rolled-up sleeves and braces bearing down on juniors and berating them for substandard articles, but nothing could be further from the truth. It was a really lively and buzzy atmosphere, and everyone was incredibly friendly.

I started gently by attending the daily news conferences. There is usually one in the morning and one in the late afternoon, with a separate one for the editor and senior journalists to discuss the editorials and leading articles. These meetings really opened my eyes to the process of choosing news items for the paper. News is not news just because it's newsworthy - it has to be selected by several layers of editors before it reaches you or me in the public domain.

"It was a slow start to my publishing career, and it was a few days before I got my first article in print. When I did, however, it was a fantastic feeling - and entailed a few minutes of frantic texting to all family and friends to buy a copy.

I was lucky enough to be able to split my time between daily news and working on the inaugural edition of the monthly science magazine Eureka. This allowed me to experience the feature-writing world, which is yet another different environment. The team atmosphere was great, and I learnt to confidently pitch my ideas to whichever editor was listening at the time!

I also attended a few press conferences with scientists presenting their results. Despite Ben Goldacre's frequent declamations, I was really impressed with UK science journalists. Not only are they incredibly knowledgeable, but they are also able to ask astute and incisive questions on any given scientific area at a moment's notice. For example, my host Mark frequently pushed scientists for clarity on methodological rigour, rather than simply accepting their purported results.I also saw him resist pressure from senior editors to overstate the findings of certain papers, because it wouldn't be true to the facts.

"It was very disheartening to work for ages on an article, only for it not to be published. Although as scientists we may get papers rejected, at least we still have something tangible in the research which has gone into that paper. We can also try another journal - unfortunately not an option for current news stories.

The power of the subeditors is also quite eye-opening. For someone to be able to change copy that will come out under your byline, without referring it back to you for approval, is very disconcerting. As scientists, we are used to going through revision after revision before submission to exclude any errors. However, the sub-editing process means that errors or opinions can be introduced and attributed to you - without you having written them. Unfortunately, one of my interviewees complained about her final article as factual errors had crept in during sub-editing. The copy that I had approved was true to the interview, but this had been changed afterwards - a difficult experience for fastidious scientists!

"I come away from my fellowship more conscious of the need to engage with the media. It is not acceptable for scientists to remain in ivory towers and deride journalists for poor communication, without attempting to meet those journalists halfway. After all, public money is funding the majority of scientific research - shouldn't the public have a right to hear about the results?

I would also really recommend the fellowship. If you enjoy writing and communicating, and would like a more in-depth experience of the career you didn't choose in order to do science, this is for you! You will also gain the title of departmental 'media guru' and be a source of erudite advice for your colleagues.

Many thanks to Nigel Eady, the British Science Association and their sponsors for organising this year's Media Fellowships."

UCL Media Relations is the central press office for UCL, based with the Development & Corporate Communications Office. It offers advice on whether research is of interest to the media, how to pitch it, informal media training, and guidance on working with journalists or production companies.

Read a sample of Dr Mandeville's work published during her fellowship.

Andromeda has absorbed stellar debris from other galaxies